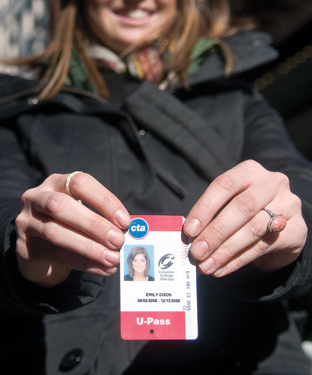 As students head back to campus each semester, many plan to avoid the crowd and pick up their new U-Passes early in the Conaway Center at the 1104 Center, 1104 S. Wabash Ave.

But unlike semesters past when students could pick up their U-Passes a week before classes begin, scheduling conflicts will prevent students from picking up their U-Passes until Jan. 26, forcing students who commute from different parts of the city to the South Loop to pay their own way on the first day of classes.

The spring semester U-Pass pick-up dates were posted on the Columbia website, stating that students would not be able to pick up U-Passes early and would have to wait until Monday, Jan. 26.

Erin Boylan, campus card coordinator, said the U-Pass pick-up was postponed due to scheduling conflicts at the Conaway Center. Late orientation for spring semester was scheduled through the week of Jan. 19-23, leaving no time or space for early U-Pass pick-up.

Boylan said hosting U-Pass pick-up at another location was not an option.

“There is really no other place on campus to host an event of that size,” Boylan said. “We were just forced to wait.”

Boylan said the campus card office has not received any complaints from students about the late U-Pass pick-up.

The postponed pick-up dates are not the only changes happening with the U-Pass this semester. As of Jan. 1, the U-Pass is no longer accepted on Pace buses. The change applies to all schools in the Chicago area that use the U-Pass.

Patrick Wilmot, manager of media relations for Pace, said the decision was Pace’s choice but was unavoidable. Wilmot said Pace was not being reimbursed for the rides provided through U-Pass and other CTA passes that were being accepted by Pace for nearly a year.

“Despite everyone’s best efforts, we were not able to broker a new deal with CTA,” Wilmot said. “Simply from a revenue standpoint, we could no longer provide those customers with rides if we were not being reimbursed by CTA.”

Sarah Reusch, a representative of CTA, agreed that efforts were made, but no deal was made between CTA and Pace.

“Initially, all CTA cards were accepted on Pace buses,” Reusch said. “So there was no conflict about the U-Pass. Unfortunately, there was no actual deal or contract between CTA and Pace, and Pace was essentially just eating those fares. It no longer fit in their budget to accept CTA cards or U-Passes and we could not come to an agreement.”

In the meantime, Pace is offering a discounted fare card for students. The Pace Campus Connection Card is good for unlimited rides for five months and costs $175.00.

Boylan said she was informed of the news from Pace less than a month ago. She said looking for solutions and discounts for Pace will definitely be added to her agenda for this semester.

Full-time students can pick up their U-Pass in the Conaway Center in the 1104 Center, 1104 S. Wabash Ave., on Jan. 26, 27 and 28 between 9 a.m. and 6 p.m. Students must bring their campus card and a copy of their schedule to pick up U-Passes. For more information on the Pace Campus Connection Card, visit PaceBus.com.