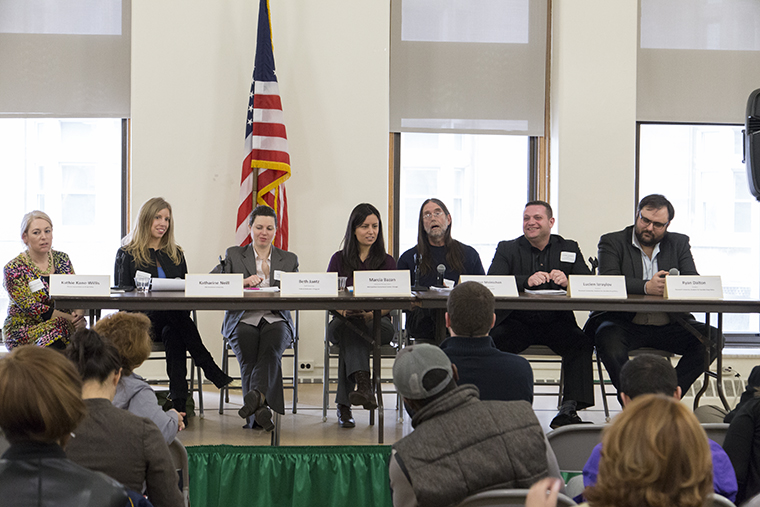 Political leaders gather April 2 for a panel discussion and press conference on decriminalizing possession of small amounts of marijuana to keep minor charges off of permanent records at Roosevelt University, 430 S. Michigan Ave.

With medical marijuana recently legalized in Illinois, some lawmakers are advocating lower criminal penalties for possession of small amounts of the drug.

Political leaders gathered April 2 at Roosevelt University’s Congress Lounge for a panel discussion about drug treatment and marijuana-related arrests. The discussion was followed by a press conference that focused on decriminalizing possession of small amounts of marijuana and a next-day forum addressing the legal consequences of being caught with weed.

A major point of discussion was a proposed amendment to the Cannabis Control Act, which would make possession of 30 grams or less a petty offense that would carry a maximum fine of $100. Possession is currently a misdemeanor offense. The amendment would also prevent pot charges from appearing on a person’s criminal record, as long the $100 fine is paid.

There has been strong support for the proposal, said Chris Lindsey, legislative analyst for the Marijuana Policy Project. He said 15 other states have passed similar legislation.

“It’s OK to fine, it’s OK to encourage people to go in a different direction, but let’s not mark a person for life [for] their use of a substance that’s safer than alcohol,” Lindsey said.

Lindsey said the amendment would create a simpler, more consistent set of guidelines for police.

“Let’s just wipe the slate clean so that law enforcement can focus on more serious crimes where people are getting hurt,” he said.

State Rep. John Cabello said marijuana-related penalties should be enforced consistently throughout the state instead of allowing counties to prosecute offenders at their own discretion.

“We need to start making sure it’s unified,” Cabello said. “We shouldn’t have different communities doing different things in [terms] of punishment.”

Marijuana possession policies and punishments within Illinois counties and punishments vary by location, according to Kathie Kane-Willis, director of the Illinois Consortium on Drug Policy. She said police spend a lot of time pressing charges for minor offenses that rarely result in convictions but stay on a person’s record for life.

“Somebody with an arrest record for life will make it harder for them to get basic support,” said the Rev. Alexander Sharp, executive director of the Community Renewal Society. “With our current marijuana laws, you don’t have a second chance in society.”

Decriminalizing the possession of small amounts of cannabis would allow law enforcement to focus on the bigger issue of drug use, she said.

“You’ll hear the federal government saying, ‘We’re really going after the hard stuff,’ but the most prevalent kind of prosecution that results in imprisonment for drug crimes is marijuana,” Jantz said.

There are still opponents to decriminalizing marijuana. Brook Lowe, treasurer of Citizens Against Legalizing Marijuana, said the biggest concern about decriminalizing pot is its effects on the brain.

“The greatest number of marijuana users is in the 25 and younger age range,” Lowe said. “Their brain is still developing and they’re in a vulnerable state where they won’t recover from the effects.”

Katharine Neill, a panelist from Old Dominion University, said the government should focus on rehabilitating drug offenders with treatment instead of being quick to arrest them.

“We have to start changing the coverage of the issue and treat it as a disease and as a problem that affects the individual,” Neill said.

Lucien Izraylov, a member of Students for Sensible Drug Policy and a former heroin user, said punishing drug users does not adequately solve the issue.

“You don’t need to put an X on someone’s record to teach people a lesson not to do drugs,” Izraylov said.