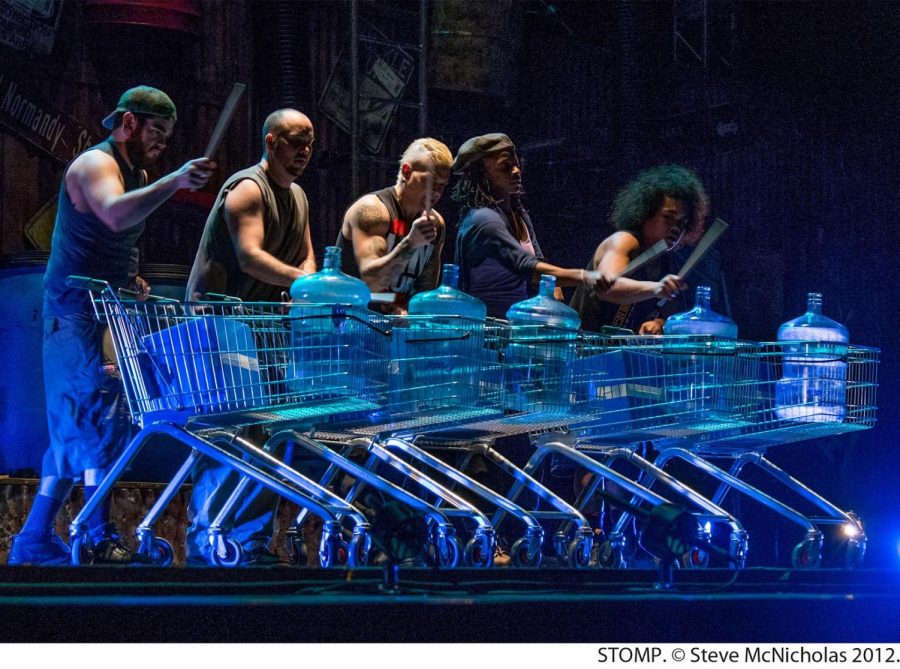 The high energy percussion show “STOMP” is back in Chicago and will run at the Broadway Playhouse, 175 E. Chestnut St., until Jan. 1, 2017.

Artis Olds may travel the world as a musical performer, but he always keeps a symbol of home close by: the Chicago flag.

Olds, a Chicago native, is one of the latest performers to join “STOMP”—the iconic percussion show in which trash can lids  and water jugs are only a few of the items used to make music. The show has been performed worldwide for 22 years and is back in Chicago until Jan. 1, 2017.

The eight-member troupe uses whatever they can acquire, excluding traditional percussion instruments, and creates rhythmic sound with them—including matchboxes, hubcaps or Zippo lighters. The show will have its Chicago run at the Broadway Playhouse, 175 E. Chestnut St.

Olds, who has also performed with musical artists John Legend and Kanye West, said performing for “STOMP” is something he has been hoping to do since first seeing the show when in high school.

“‘STOMP’ really tells a story of how we are all more alike than we are different,” Olds said. “When you look at the characters on stage, it’s a pretty odd collection of people who come from different walks of life, and then we take all of these non-traditional items and we do something that is very beautiful with them. It’s a great look at what life could be.”

John Green, professor and former chair of the Theatre Department, said the show’s long run is proof  it energizes its audiences.

“[‘STOMP’] is a totally visceral experience,” Green said. “Dance and physical theater are powerful because the intensity of the physical image evokes something in us.”

Green added that it is often the physical environment that will provoke an emotional response, and human beings want to have experiences outside of themselves. This show gives viewers freedom and empowerment through the physical body, music and sound , he said. Performers wield broom sticks and clamber over each other to entertain their audience for an hour and forty-five minutes.

While not a native Chicagoan, performer Jeremy Price has been part of the troupe intermittently since 2003 and said the breaks he has taken from the show have allowed his love for it to grow.

Price added that travel is a  perk of being a part of the show, as well as meeting new people and learning from them. Other than Chicago, “STOMP” has permanent shows in New York and London.

Olds said as a new cast member, the opportunity to learn the work ethic and personalities of veteran performers like Price has influenced his performance and made him better.

Olds said a smaller theater like Broadway Playhouse, which has a capacity of 549 people, is the perfect size for this performance; it is big enough to make a connection with a large group but small enough to still be intimate.

“[‘STOMP’] is something people can walk away from and just feel good, which is what we are looking for,” Olds said. “We want you to go home and not look at your pots and pans the same way again.”