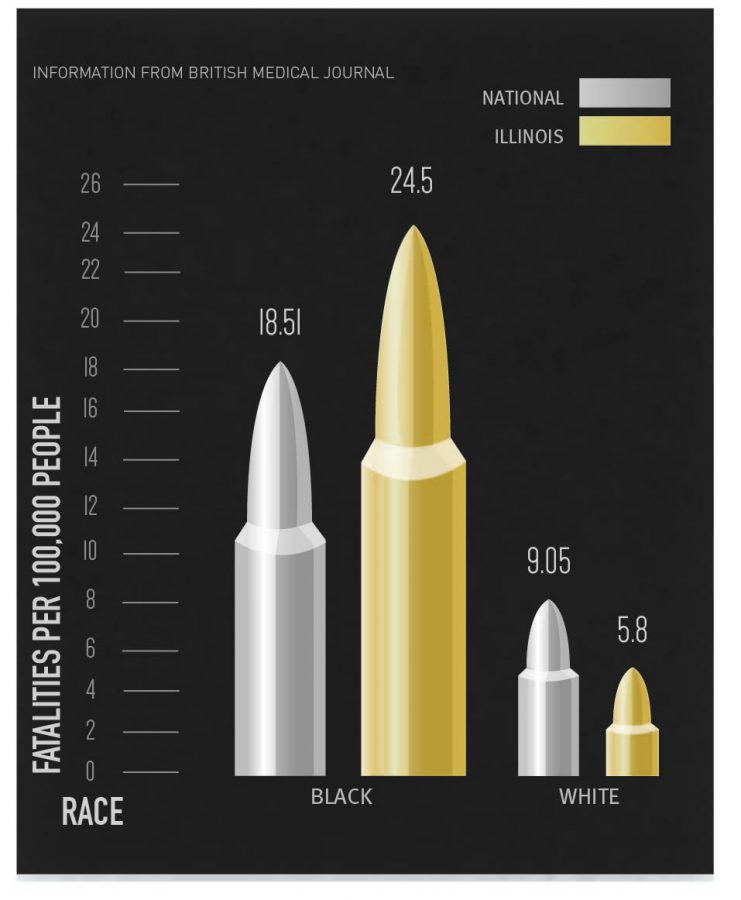 A team of researchers led by Bindu Kalesan, assistant professor at Columbia University’s Mailman School of Public Health, analyzed data from the Centers for Disease Control and Prevention using statistics aggregated from 2000–2010.

Kalesan and her research team found that the average national firearm-related fatality rates among blacks and whites were 18.5 and 9.05, respectively, per 100,000 citizens.

The national average for Hispanics and non-Hispanics were 7.13 and 10.13 per 100,000, according to the British Medical Journal, where the study was published.

Kalesan said the racial divide is far more prominent in Illinois, with 24.5 black fatalities per 100,000 as opposed to the 5.8 per 100,000 rate for whites. She said she originally questioned the disparity but now attributes it to increased gun violence in the culture nationwide.

“It’s more of a social gun culture [that] has grown in our country, and that’s probably what is driving the gun violence culture, which is currently in an endemic state and we have not seen any decrease,” Kalesan said.

Robert Geffner, president of the Institute on Violence, Abuse and Trauma at Alliant International University in San Diego, California, said gun violence is a more common issue in the U.S. than in other countries.

“In many countries around the world, they have pretty well reduced or [have] eliminated hand guns and other types of guns,” Geffner said. “We do not see gun violence anywhere near the levels [in other countries] that we see in our country outside of war zones.”

Geffner said the easier it is to obtain guns, the more likely it is that violence will take place. He said there is a relationship between the two, among both accidental and intentional deaths.

“Not everyone who has a gun is obviously going to be violent,” Geffner said. “When you do have someone who does have attitudes about violence and [that is their] way to solve problems and has easy access, then it increases that type of violence.”

Kalesan said although research shows that more blacks die from gun violence than whites, determining the cause is very difficult.

Geffner said the racial disparity is a complex problem, and he suggested that educating children about the issues of gun violence should begin earlier and that more restrictions should be placed on guns to limit their accessibility.

Kareem Nelson, executive director and founder of Wheelchairs Against Guns, a nonprofit organization dedicated to increasing awareness of gun violence, said more regulations should be placed on ammunition.

Chicago Police officer Tom Sherry said the increase in gun violence is due to the lack of family structure, personal responsibility and lack of information and education on the subject.

“I do not necessarily think the culture of diversity of Chicago’s makeup is a key part to the gun violence,” Sherry said. “I believe more so that parental responsibility plays a key role. [For someone] that might feel neglected, [have] lack of family structure or [is] left out in the streets, they are left to seek out a substitution. That substitution comes in the form of people in similar experiences, and it creates a vicious cycle.”

Elaine Lane, an adjunct professor at Montclair State University who lost her 18-year-old son to gun violence on March 14, 1998, said society does not value life.

“[We feel] it is alright for us to pick up a gun because someone has stolen 20 cents from us [and] to shoot [him or her] or someone has trespassed over this piece of dirt that we think belongs to us,” Lane said.

Nelson also said young people need more extracurricular activities to participate in so that their minds can be further cultivated and enhanced. He said members of the community have to provide as parents, neighbors and leaders, and serve as activists in the area.