Exercise may be missing piece for some cancer patients 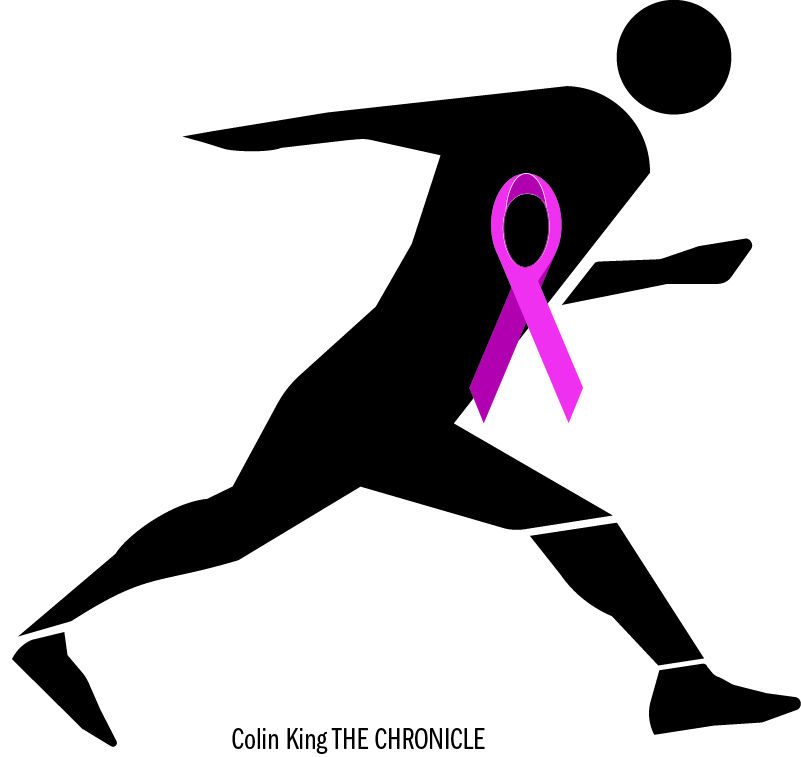 Exercise may be missing piece for some cancer patients

Exercise not only plays a vital role in improving and maintaining the quality of life in healthy people but also can do so for cancer patients. However, sustaining a regular exercise regimen can be difficult for those with ailments that take a toll on the body.

A new study published March 12 in the Journal of the National Cancer Institute suggests that exercise may be a useful tool to combat tumor growth in cancer patients. Dr. Mark Dewhirst, lead author of the study and a professor of radiation oncology at Duke University, said his research group set out to see what impact exercises might have on tumor physiology.

“We thought if a tumor is just sitting there, it’s going to be exposed to effects that would occur anyway,” Dewhirst said. “We thought it would be interesting because exercise affects all parts of the body and we were pleasantly surprised at the overall results.”

Dewhirst said tumors from breast cancer cells were implanted into four groups of mice in the original experiment. Each group of mice then underwent a different exercise regimen.

Dewhirst said the first group of mice was conditioned for nine weeks prior to being given cancer, making them representative of a healthy population of women who exercised avidly before diagnosis. The second group had the same conditioning but stopped exercising after receiving the tumors. Dewhirst said the second group represents women who are diagnosed with cancer and stop working out due to depression.

The third group was stagnant prior to cancer implantation and only became active afterward, representing women who attempt to exercise after a breast cancer diagnosis with approval from a doctor, according to Dewhirst. The fourth group of mice did not exercise before or after receiving the cancer cells.

“It turns out that whether the mice ran before or after the tumors were implanted, there was a good effect either way,” Dewhirst said. “We didn’t know whether it would be worse or better for the tumor growth, but it ended up slowing it down and improved its blood flow—which was totally unexpected.”

According to the study, hypoxia—lack of blood flow—to tumor cells makes them resistant to both radiation and chemotherapy treatment. Due to hypoxia, it is notoriously difficult to administer drugs directly to tumor cells, but Dewhirst said the increased blood flow exercise provided for the mice could make tumor growth more sensitive to drug and radiation therapies.

According to an August 2012 Mayo Clinic study published in the Journal of Pain and Symptom Management, a wide body of research has shown that although exercise can have powerful effects on cancer care and recovery, oftentimes cancer patients are reluctant to include increased physical activity as a part of treatment and few discuss it with their oncologists.

Dr. Andrea Cheville, lead author of the 2012 paper, said in an emailed statement that although it was clear that patients wanted to get advice from their oncologists about whether or not to exercise after diagnosis, very few were actually receiving any.

“Those that did were given very generic guidance [like] ‘Keep active,’” Cheville said. “It surprised us that cancer patients assumed that if their doctors didn’t mention exercise, it wasn’t important.”

Cheville’s study was part of a series of investigations that looked at exercise habits among cancer patients. Those who exercised regularly before diagnosis were more likely to exercise afterward than those who had not.

One point made in both studies is the need for a protocol on how patients experiencing the debilitating side effects of cancer treatments—such as chemotherapy—can actually exercise safely.

“It is difficult to exercise [during treatment], and I will not underplay that,” Dewhirst said. “What I can say is our research team has run several clinical trials where women with breast cancer who are undergoing chemotherapy…around 85 percent were able to complete the prescribed exercise regimen. The women who did had much better cardio-pulmonary performance than women who didn’t exercise.”

Dr. Brian D. Lawenda, national director of integrative oncology and cancer survivorship at 21st  Century Oncology, said it is not uncommon for many of his patients to experience fatigue over the course of their treatment throughout.

“Problems with weight loss and all of these things can make it challenging to exercise,” Lawenda said. “When recommending exercise to patients you have to take all of these factors into mind. It’s something patients need to discuss with their treating oncology team whether or not [it is] safe and appropriate to exercise safely.”

Cheville and other doctors will have to implement a paradigm shift in the way doctors deliver cancer care, Cheville said.

“Currently, surgery, radiation and chemotherapy are the overwhelming emphases of cancer care,” Cheville said. “It will take time and concerted educational efforts to expand the focus of oncologic clinicians to include therapeutic exercise.”

Lawenda said he evaluates all of the challenges chemotherapy patients face before seeing how deconditioned they might be and whether or not they are at risk of hurting themselves.

“We talk about exercise in terms of things that patients can do,” Lawenda said. “If they’re not exercising at all, simply moving around and walking, without pain for example, is probably the best recommendation that we can give patients.”

According to Dewhirst, cancer research states that chemotherapy can age the heart by the equivalent of 10 years and have negative impacts on its function. If a 50-year-old woman with breast cancer undergoes chemotherapy but exercises simultaneously, she could not only avoid the negative impacts of the treatment, but effectively have a “younger” heart afterward, Dewhirst said.

“[I’ve read about] people that are highly critical against exercising throughout chemotherapy and I understand that completely,” Dewhirst said. “But for people who say I am going to fight through this and try it, most of them felt like it really helped them.”

Lawenda said most of these studies have qualified exercise as walking at a fairly steady pace.

“If patients are able to safely walk at a steady pace, they are achieving what most of the data has been evaluating in patients whom we have seen benefits for cancer outcomes and quality of life outcomes,” Lawenda said.