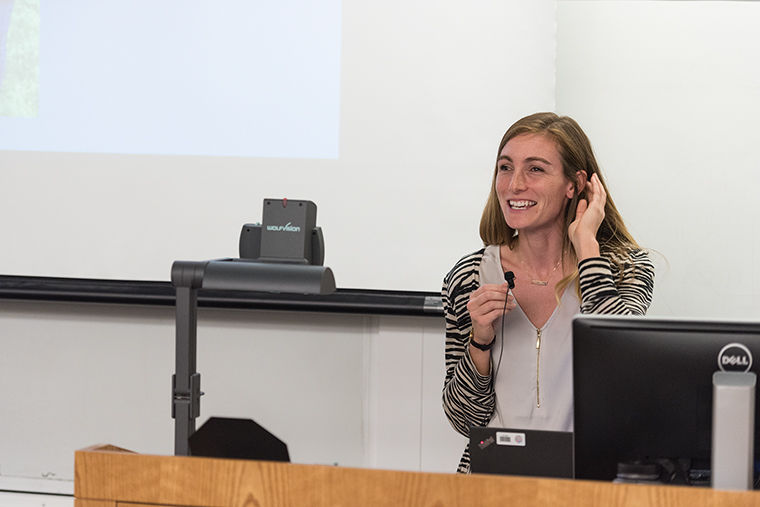 Christine Skolnik, founder of the festival, said she was inspired by large-scale climate festivals in Los Angeles and Paris. Events will run through Oct. 26.

“We see a need for [environmental awareness] in all major cities,” Skolnik said. “Every city needs to incorporate the arts and engage young people in the conversations about climate change.”

The festival’s main goals were to draw attention to the UN COP22 climate talks—where countries gather to evaluate their effect on the environment—teach about local environmental justice issues and encourage students to be environmental activists.

“[The organizers’] passion is to help students own their role as leaders and visionaries now,” Skolnik said. “It’s not when you graduate; it’s not when you turn 21. We really need the energy, the creativity [and] the imagination of students now.”

Norman Alexandroff, Columbia’s director of internal and external partnerships, said when Skolnik reached out to him, he knew getting involved would be an excellent opportunity for students.

“Climate action is probably one of the most important issues facing this generation of young people emerging from college today,” Alexandroff said. “We’re trying to activate the arts and communications students at Columbia to be thought leaders on these subjects. We hope this is the first effort of a much larger initiative.”

The Climate Festival’s next event Oct. 11 will feature Columbia professor and acclaimed photographer Judy Natal. Natal will premiere two new videos and discuss her recent work, “Another Storm is Coming,” which focuses on the effects of extreme weather on those living on the Gulf Coast.

“As a Columbia instructor and a leading voice on the subject, [Natal] seemed like the perfect person [to feature at the festival],” Alexandroff said.

The “Raptivate!” event began with a presentation by Melissa Brice, founder of Chicago 350, about the need for fossil fuel divestment in Chicago, before handing the microphone to Joey “FineRhyme” Feinstein. Feinstein, an Andersonville resident, performed his self-invented raptivism—a mixture of rap and activism. An open mic for students followed, in which they delivered their own environmental rhymes.

Other upcoming Climate Festival events include “Eco-Transformations: Nature, Art and Environmentalism,” an exhibit of artistic work from Columbia’s “Nature and Environmentalism in U.S. Culture” class; an environmentally focused Acoustic Kitchen at Columbia; a Kids and Family Day; and an improv show at the Annoyance Theatre and Bar.

Michael Pappas, a sophomore communications student at DePaul University, said he is happy to see his school leading this environmentally focused festival.

“It’s great that it’s free to the students,” Pappas said. “I want to know more about how [climate change] will affect me and my day-to-day life.”