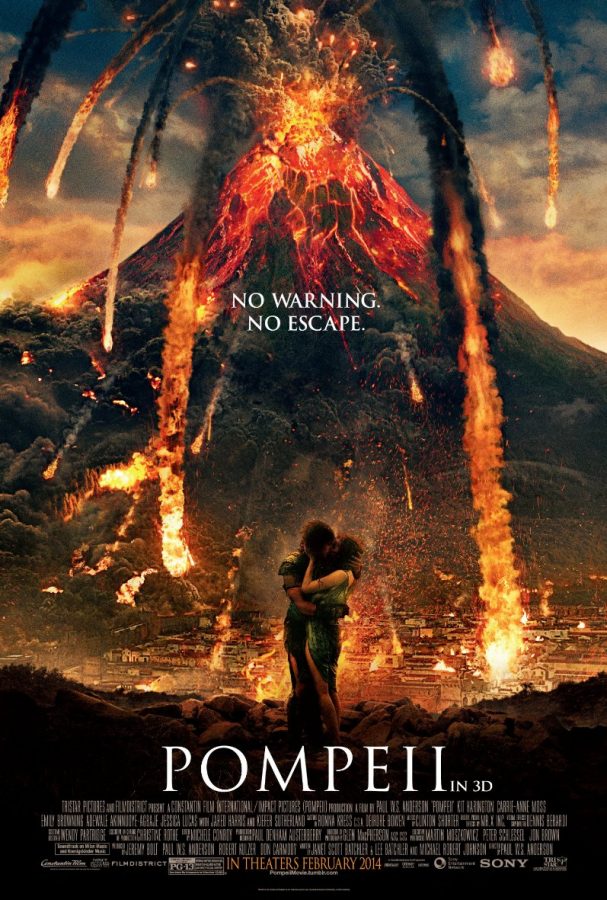 Even impressive explosions and wanton destruction cannot help some movies escape mediocrity. The new action-adventure film “Pompeii” by director Paul W.S. Anderson (“Resident Evil,” “Death Race”) has the perfect source material for a successful historical drama. However, an interwoven love story and a host of disastrous clichés will have audience members pining for the impending volcanic eruption simply so the film will end.

The ancient city of Pompeii was a thriving Roman port and the film captures its complexity with tracking shots. Little context is needed because most should recognize the story of the Roman province destroyed by the eruption of Mount Vesuvius in A.D. 79. Like James Cameron’s modern epic “Titanic,” the ending in “Pompeii” is a foregone conclusion. Unlike “Titanic,” the journey to the inevitable destruction is what falls apart, while “Pompeii” tries to mask its narrative inadequacies with over-the-top special effects.

“Pompeii” centers on Milo (Kit Harington), who is the survivor of a Celtic tribe slaughtered by a band of Romans led by Corvus (Kiefer Sutherland). Skip ahead 15 years and Milo is a gladiator known as The Celt, a proficient killer who also happens to closely resemble an underwear model.

Milo catches the eye of Pompeii noblewoman, Cassia, played by the expressionless Emily Browning (“Sucker Punch,” “Lemony Snicket’s A Series of Unfortunate Events”) on her way back to her home city after spending a year in Rome. The two instantly fall for each other and spend the film fighting for a love that is little more than a plot device. She appreciates his humanity because he mercifully kills an injured horse in front of her, and that is basically all the courting the film details. Milo and Cassia have only a few scenes together before they risk their lives for one another, making their affection more convenient than genuine. In an awful twist, Corvus, the same Roman who slaughtered Milo’s family, lusts after Cassia. Ancient Rome was a small world, it seems.

The rest of the film writes itself with Corvus periodically laughing maniacally about power and hitting on a woman half his age. Milo eventually gets his revenge, and all seems well until the rumbling from that pesky volcano—the one the audience has been waiting for.

An hour in, with barely any mention of Vesuvius, audience members may wonder if they wandered into the wrong theater. “Pompeii” needed to get one thing right, the eruption, but the sequence is anticlimactic. It takes far too long to do any real damage to the city. Historians are divided on the actual event, but a quick Google search shows they agree on the immediacy of the disaster. However, this detail takes a backseat to the plot and the film loses its remaining credibility quickly. According to “Pompeii,” the volcano waited to fully erupt so a gladiator could act out a vendetta.

Many scenes in “Pompeii” seem forced and at some points even stolen from other films of similar genres. The fight sequences, for example, look shot-for-shot like recreations of Ridley Scott’s “Gladiator,” going so far as to place actors in what look like the exact same costumes. Harrington, however, is not Russell Crowe, and the fights do not have nearly enough gusto to make them memorable.

The movie even contains a historically inaccurate wall of water flowing through city streets a la Roland Emmerich’s “The Day After Tomorrow.” Apparently there was a massive clearance sale on computer-generated giant tidal wave effects after that film released because every disaster movie in the last decade uses one to destroy doomed cities.

Narrative elements suffer from poor writing but also a lack of sincerity. The film oversimplifies everything and offers no character development. Corvus even becomes a Roman Senator with the power to decide the fate of Pompeii’s financial future “because of politics.” No, really. That is the explanation given. The film does a meager job of hiding that the story is trivial.

It does not help that the film’s budget was spent on elaborate costumes and sets rather than gifted actors. The cast consists of mostly TV show throwaways from current or cancelled science fiction/fantasy TV shows such as “Game of Thrones” or “Caprica.” Even Sutherland, the only real performance standout, had his last major role on “24.”

“Pompeii” is more an epic disappointment than the epic cataclysm it tries to be. The actors and the script are inadequate for what should be a riveting tale. In trying to combine or copy elements from more successful films, “Pompeii”   lacks any identity or novelty.