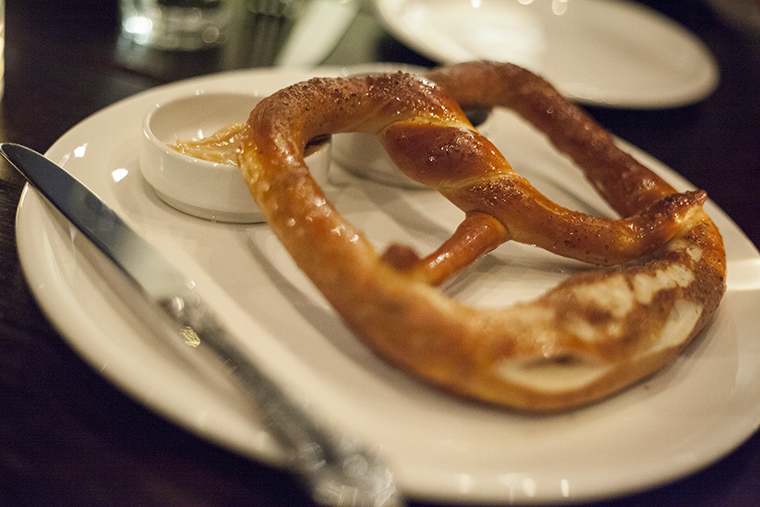 The Radler, 2375 N. Milwaukee Ave, which opened in December 2013, offers a variety of German dishes. One such delicious dish is the popular Haus Pretzel.

A few blocks north of the California Blue Line stop, the Radler, a German restaurant born of chefs Nathan Sears and Adam Hebert, is a warm respite from Chicago’s miserable weather.

The Radler opened in Logan Square in December with the promise of traditional German food and it delivers, serving up delicious comfort dishes perfect for a chilly winter evening.

With its comfortable, rustic atmosphere, long, wooden communal tables and exposed brick wall, the interior of the restaurant echoes the overall aesthetic of popular bars and restaurants in the area. Patrons at the bar face a bold painted mural that looks like it could be original to the building. Numerous tea lights on the tables warm up the dim, tavern-like room. Savory scents waft throughout the space whenever a dish leaves the kitchen.

The menu offers a wide variety of choices from snacks and small plates to larger Bavarian dishes. Homemade sausages ($9–17) are on the menu, alongside such dishes as cauliflower custard ($12) and braised rabbit ($16). The Radler also boasts a solid selection of German beer and wine, as well as a few local beer options and signature cocktails.

The German Gluhwein ($7), a mulled wine also known as glögg, is served warm and spicy in a boot-shaped mug. The first sip was bitter but had a sweet finish. Chunks of chopped apple float at the surface, soaking up the wine and leaving a savory treat.

The German onion pie ($11) has the perfect piecrust: flaky on the outside and soft on the inside. The onions were cooked so they were sweet but retained their natural savory flavor beneath the crust, which was laden with bacon—another savory complement with the addition of a little salt. The mini pie sat atop a Pilsner soubise, a French sauce of pureed rice, onions, butter and cheese, which lent a hint of earthiness. Simple, shaved Brussels sprouts topped the pie and spilled onto the plate adding the necessary fresh, green crunch. The dish combines simple flavors and textures into the perfect recipe for a meal to be endlessly enjoyed.

As a go-to German dish, the Haus Pretzel ($6) comes with two sauces—blackberry jam and barley malt butter, aka heaven on earth. Malt and barley are cereal grains, giving the butter a wholesome flavor with strong notes of brown sugar and maple. The jam was bright and fruity but couldn’t compare to the butter in the neighboring dish. The pretzel itself was pretty standard, brushed with a light layer of butter and sprinkled with coarse salt. It wasn’t super fluffy, as some pretzels tend to be; instead, some parts were more thin and spindly, creating a crunchier, chewier contrast. An extra $2 buys a trio of different mustards to accompany the pretzel.

The Radler was half-full on a weeknight. The service was fast and friendly, and many patrons were sharing dishes. The restaurant seems to be popular—it was partially funded through a successful Kickstarter campaign started in April 2013. The project sought $25,000 in donations and completed its campaign in June 2013 with 187 donors providing $28,927. With its relaxed, comfortable vibe and contemporary twist on an über-German menu, the Radler is here to stay.