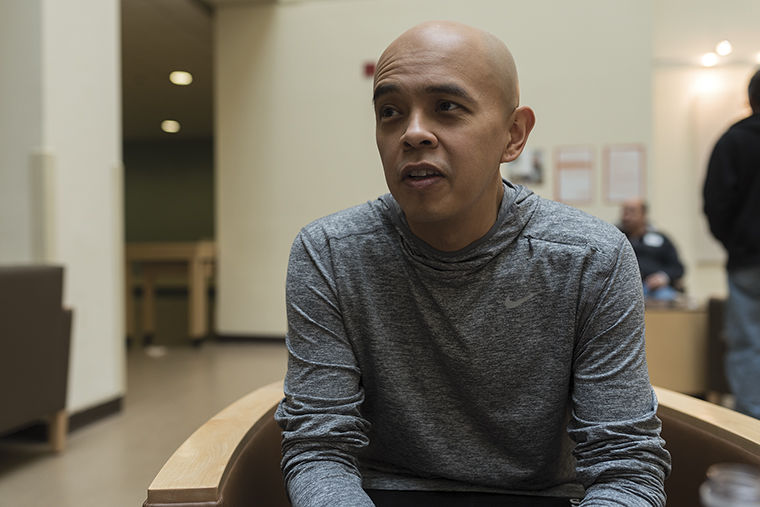 “Now when I see teenagers, they directly associate graffiti with some way of money making,” said Miguel Aguilar (pictured), community educator and graffiti artist who teaches graffiti to high schoolers.

Twenty years ago, Miguel Aguilar took to the streets and began expressing himself through graffiti. It was a way to connect with other teenagers in the community, do something new, release tension and figure out his place in the world.

“[Graffiti] was something uncompromised. There weren’t people 20 or 30 years older than me telling me how it was,” Aguilar said, a Pilsen resident who signs his work as Kane One.

Seeing other graffiti artists from his community sustain a livelihood through the art form inspired him to attend the School of the Art Institute of Chicago and follow his artistic calling, where he earned a master’s in Arts Education in 2011.

Aguilar is not only known as a successful graffiti artist: He is also a professor at SAIC, a marathon runner and an arts teacher. He works with high schoolers from Chicago Public Schools in Pilsen and Little Village through the Graffiti Institute, an organization he founded in 2012 that offers teenagers hands-on arts education from citywide artists.

On The Real Film, a local film company, recently featured Aguilar in its latest project. The film was released Jan. 27, and co-producer Erin Babbin said the project took a year to film and produce. The short film celebrates Aguilar’s accomplishments in the community, which appreciates his services, Babbin included.

“Working with him is a pleasure,” Babbin said. “He is such an asset to the community that I am grateful to know him.”

As a natural helper and advocate for social justice, Aguilar said he finds working with the students is a way to give back to the community and provide artistic possibilities that may not otherwise be available. Although it is normal for young people to explore new ideals, he knew he needed to step in when kids began to associate drugs and violence with graffiti artists.

“When I saw the gamut going that way, I wanted to step in and say, ‘Hey, there are all these anchor points, all this [graffiti] tradition, a tone of social practice where we got into this so we can avoid these trappings,’” Aguilar said.

He said it is important to ignore the media’s misconceptions about graffiti and instead relish the opportunities it can give teenagers and aspiring artists.  Passing on graffiti culture and its history is important for the current generation to know, he said.

“I keep graffiti at the exploratory level, which keeps it fun and lighthearted and easy to digest,” Aguilar said. “But as we get into the possibilities of why people do it, I started building a broader context for people’s identity and for the populations of youth I deal with [because] their opinion and voice isn’t something concentrated on so much in public schooling.”

Because the Graffiti Institute still has no physical location, Aguilar teaches students at their respective high schools or spaces such as the University of Chicago and Mana Contemporary Chicago, an art building in Pilsen.

“If this is one of the first spaces where they can explore their own voice or their own ideas of what they enjoy—that is a great space I can help provide,” he said.

Aguilar’s interactions with his students give him a respected edge as an educator, said Kerry Richardson, who saw him in action when she co-taught a class with Aguilar through the Graffiti Institute in February 2016 called “Revelations.” The class focused on intersecting digital art through augmented reality with graffiti techniques in public spaces.

Richardson, a fellow SAIC professor in the Film, Video, New Media and Animation Department and the Contemporary Practices Department, said Aguilar’s close relationship with students made them feel comfortable and engaged. She remembers him drawing in the students’ personal sketchbooks, which is a common practice in the culture, although Aguilar added that he has never seen anyone else do it in a graffiti class.

“They get not only a validation of him looking at their work and talking about it with them but also a legacy of teachers and students where someone in your circle gives you a gift of writing or drawing something in your book,” Richardson said.

Aguilar’s creative wheels are always turning. Currently, he is preparing for a painting exhibit at the National Museum of Mexican Art in March for its 30th anniversary. He also plans to create a curriculum with SAIC Arts Education undergrads to fuse art, running and social justice into one and work with the Homan Square community next spring.

Aguilar said he sees how the perception of graffiti and graffiti artists has changed in today’s culture in how others treat his own work. He said the influx of street art has opened up the perception of the art form, but the community connection is the most rewarding aspect.

“It’s probably still the most keen meritocracy I have been a part of,” he said.