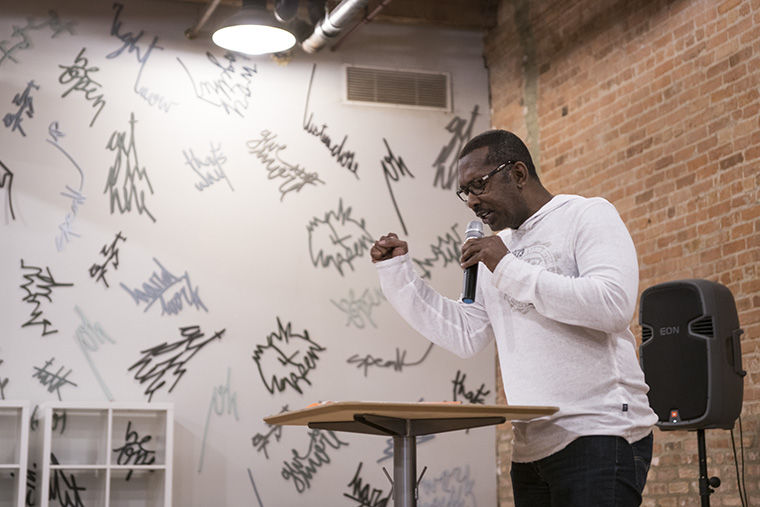 Huddled in the aisles of After-Words Bookstore, 23 E. Illinois St., poets and listeners came together April 13 in celebration of National Poetry Month.

Illinois State Poetry Society and Poets & Patrons presented a reading highlighting 15 local poets with the intention of bringing in people who were not usually fans of  poetry and encourage them to appreciate the literary form, according to organizer and Vice President of Poets & Patrons Caroline Johnson. In celebration of the month, on April 29, the Chicago Public Library is presenting Poetry Fest at Harold Washington Library, 30 E. Lake St. The daylong event will feature workshops and readings.

“People are afraid of poetry and don’t like it because they had a teacher who bashed them over the head with it, similar to math,” Johnson said. “It’s nice to have this month to show people that poetry is not just iambic pentameter; it’s about sharing a feeling.”

Typically, Poets & Patrons produces workshops and juried readings for which participants submit poems in advance that are approved by a committee, Johnson said. This event is more democratic, with an open mic for members of Poets & Patrons or ISPS, she added.

At the reading, Susan Moss, President of ISPS read from her new book, “In from the Dark.”  Encouraging people to delve into poetry, she said she hopes people find themselves in her work and connect with their own deeper feelings and observations.

“[When I read my work], I share my own experiences, but because we all share humanity, anyone alert to their deeper feelings and surroundings will find a way to travel with me,” Moss said.

National Poetry Month was inaugurated by the American Academy of Poets in 1996. Over the years, it has become one of the world’s largest literary celebrations bringing together schools, publishers, libraries and booksellers, said Elizabeth Burke-Dain, director of Marketing and Media at the Poetry Foundation. The foundation has been posting poem samplers on social media everyday in celebration, ranging from poems about football to peace, she added.

“Our mission at the Poetry Foundation is to create a more vigorous presence for poetry,” said  Burke-Dain, who thinks poetry has had a significant impact on Chicago. This year marks the 100th birthday of the late Pulitzer Prize winning-poet and Chicago native Gwendolyn Brooks.

“[Brooks], as a black female poet, has influenced many young poets of color in Chicago and across the world,” she said. “She’s very emblematic of Chicago poetry and literary history.”

Burke-Dain said many people who have difficulty with poetry look for particular messages when reading, as opposed to absorbing the literature. When readers have a limited vocabulary and understanding of the concept of poetry, they may not grasp it, she added.

“Reading poetry is more like being in an art museum: You [can] just walk by [pieces] that are not speaking to you,” she said. “When you understand that your visceral response to a poem is as true a response as an educated one,  that’s the best way to approach poems.”