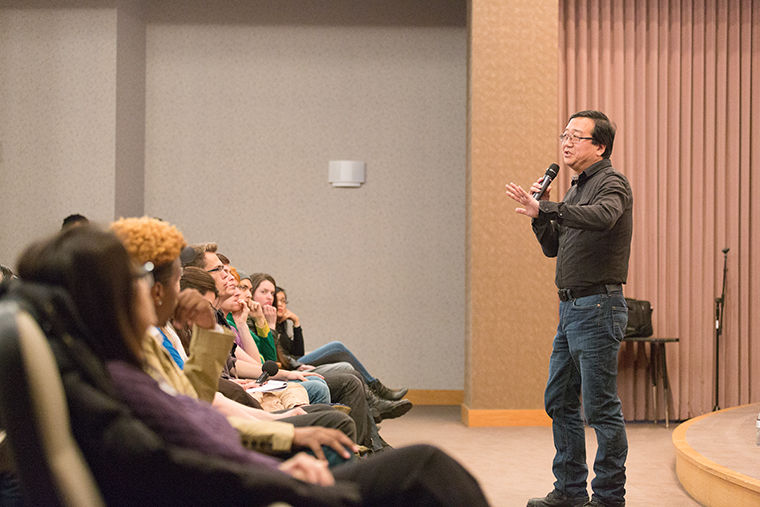 Cinematographer and 1980 film alumnus Michael Goi talked about his filming techniques at an April 19 lecture and Q&A in the Film Row Cinema auditorium in the 1104 S. Wabash Ave. Building.

Director and cinematographer Michael Goi received Emmy nominations for his work on shows such as “American Horror Story,” “Glee” and “My Name is Earl” but says he still has not fully made it in his field—and hopes he never does.

“I hope that I never make it because when you have made it, that means you have achieved a goal, and then you need a new goal,” Goi said. “You should always be reaching and never quite getting where you want to be in this industry.”

Goi, a 1980 film alumnus and class valedictorian, visited the Film Row Cinema auditorium in the 1104 S. Wabash Ave. Building on April 19 for a film screening and Q&A hosted by the Office of Development & Alumni Relations and the Cinema Art + Science Department.

Goi has accumulated more than 70 cinema and television credits including “The Town That Dreaded Sundown,” “Salem” and “Judas.” He also taught film courses as an adjunct professor from 1980 to 1983. During his visit, Goi shared how he uses the camera to reflect characters’ minds, what constitutes good cinematography and what goes into his filming process.

Goi explained his shooting process by presenting a clip from “American Horror Story: Freak Show” in which director Ryan Murphy asked him to include flashes resembling 1930s German fetish pornography.

To evoke a black-and-white scene full of blinking scratches and lines, Goi said he asked the film loader to unveil the film in a dark room, spray it with water, blow dry it and smash it with a flashlight before putting it back inside the camera.

“The fun part of ‘American Horror Story’ is that we can create all these looks at the same time we shoot them,” Goi said. “It is not something that has to be done in post-production.”

“He does not rely on shadows [as] being a primary source of fear,” Pullings said. “He does it in a way where natural light can cause fear. He is more about the aesthetic and emotion than just style.”

Goi also recounted a time he was challenged to film a scene of the show without displaying the protagonist’s face because production did not have enough time to do her makeup.

Goi said that after discussing this issue with the director, the crew managed to tell the story by setting the camera behind her, as the camera circled to showcase her mind’s turmoil and turning the camera upside down to show a picture through a glass table.

The college invites alumni to campus to speak about their experiences in their field and at Columbia.

“The tools and skills that [Goi] learned at Columbia obviously played a major part in his life as to what he’s doing as a [director and cinematographer],” Smith said. “The real life lessons of studying hard in school and being passionate about your career path [are] something all students can gain from Michael’s talk.”

“What I try to do is get inside that person’s head and see the world the way they see it,” Goi said.

Goi’s parting advice to students was to never go with their first idea when filming because it is usually the most conventional and expected approach.

“You thought of it first because you probably did it before and did it successfully, which is why you want to do it again,” Goi said. “A second way to do it is going to be much more difficult to find, but it is going to be more gratifying to watch because it [comes] from a different part of your brain.”