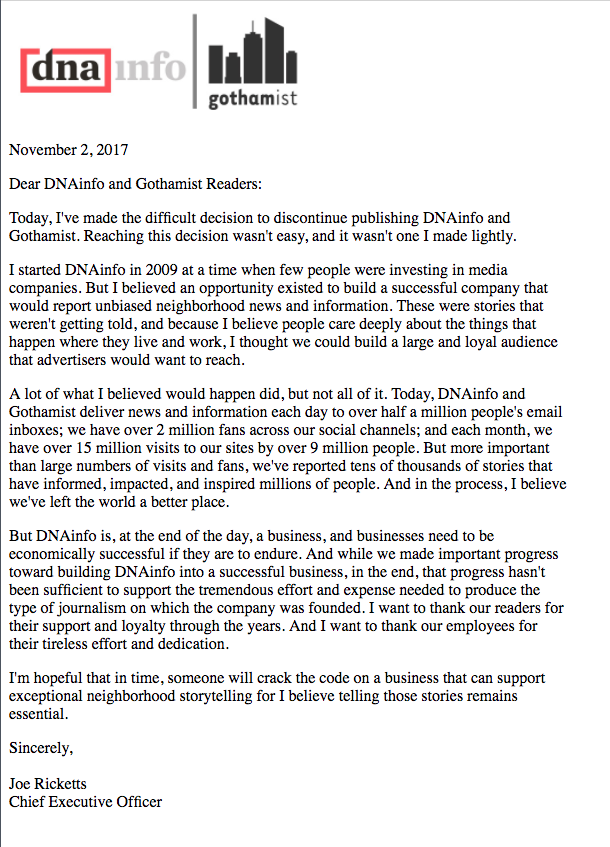 As of Nov. 2, the online publication and newspaper DNAinfo has been disbanded, according to a 4 p.m. message from Chief Executive Officer Joe Ricketts left on an automatic redirect page that has replaced DNAinfo’s website.

DNAinfo was created by Ricketts in 2009, had both Chicago and New York publications, and hosted affiliated sites The Chicagoist and The Gothamist—both of which were also dissolved. This news comes just a week after employees voted to unionize.

Ricketts cited economic reasons for the publication’s disbandment and stated, “A lot of what I believed would happen did, but not all of it. Today, DNAinfo and Gothamist deliver news and information each day to over half a million people’s email inboxes; we have over 2 million fans across our social channels; and each month, we have over 15 million visits to our sites by over 9 million people. But more important than large numbers of visits and fans, we’ve reported tens of thousands of stories that have informed, impacted, and inspired millions of people. And in the process, I believe we’ve left the world a better place.”

It is unclear whether employees were made aware that this shut down was coming, but some posts on social media suggest they were not. DNAinfo and its affiliates had articles published and posted on social media up until an hour before the announcement Nov. 2.

It is also unclear whether the stories posted on the publications’ websites will be available in the future. As of press time, attempting to access any story via social media redirects to Ricketts’ letter.