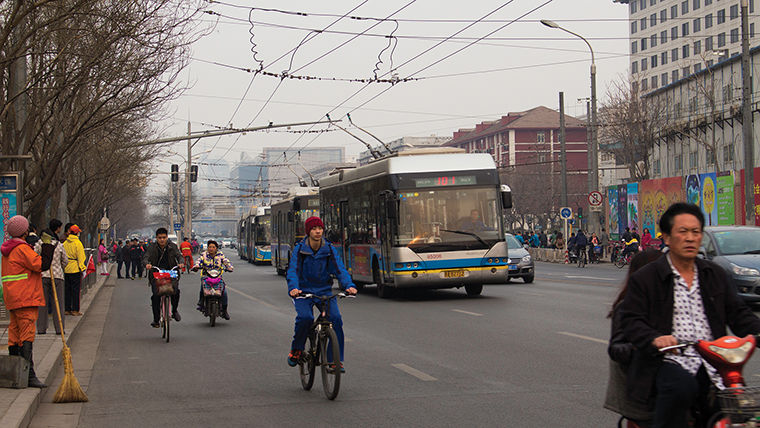 Outside of downtown Beijing, students experience how heavy rush hour traffic contributes to pollution and smog.

The industrial revolution brought an era of innovation and economic growth that ushered in technological comforts and conveniences. But the path to the modern Western World was not paved without sacrifices, namely the environment.

About 35 years ago, China joined the West and started to undergo great economic reform. Now, it is the world’s leading exporter of  consumables synonymous with Western life. But China has also begun to experience the toll industrialization can take on the natural world and the lives of citizens.

“Economic prosperity has resulted from industrialization, but so too has toxic pollution,” said Daniel Gardner, a professor of Chinese history and modern culture at Smith College in Massachusetts. “The Chinese government is taking this issue very seriously.”

A group of Columbia students began the Global Digital City project in collaboration with the Beijing Film Academy for one week in January and in March. The Chinese BFA students visited Chicago during J-Term, and Columbia students went to Beijing for Spring Break.

“The last couple of days I really felt it in my lungs, and I saw the severity of it from the number of people wearing masks,” said Ava Ginsburg, a senior cinema art + science major. “It’s not something that people in the U.S. have to think about every day as a social issue, but it is a huge social issue for everyone living in Beijing.”

Gardner said most Americans do not understand for how seriously air pollution can impact daily life until they experience it outside of the country. Beijing is not the most polluted city in China, but there are frequent days in the year when the air quality index goes above the 500 point. Anything above 301 is considered to be hazardous and anything below 50 is considered safe. During portions of the students’ trip to Beijing, the AQI ranking reached almost 900.

The U.S. Environmental Protection Agency created the air quality index as a daily forecast of pollutants. AQI measures these pollutants including what is known as particulate matter, specifically PM2.5. This matter is about one-thirtieth the width of a hair, so small that it is breathable.

“I didn’t start thinking about the air quality until the last couple days, when the AQI was off-the-charts hazardous,” said Eric Scholl, associate chair and television professor at Columbia. “It was at 895 and at the same time, we had a sandstorm and were advised to wear our masks indoors as well.”

Compared to the U.S. and most Western countries, the AQI readings for Beijing reach an alarming level on certain days, Gardner said. These readings tend to occur more in winter months.

As does the U.S., China relies heavily on coal and other fossil fuels to heat homes and power cars. The nation’s economic boom led to more middle-class prosperity and job growth, and the need for cars began to grow, Gardner said.

According to the World Health Organization and the Health Effects Institute’s Global Burden of Disease’s 2013 study, outdoor air pollution contributed to premature death—an estimated 1.2 million premature deaths in China alone in 2010. Outdoor air pollution ranks among the top global health risk burdens and the fourth-worst health risk for the Chinese.

Cerebrovascular disease, commonly known as stroke, is the worst disease attributed to PM2.5 pollution in China, killing 605,000 people in 2010.

Since the 1980s in northern China, where Beijing is located, life expectancy has been reduced by about five and a half years due to the nation’s reliance on coal and gas-powered vehicles, Gardner said.

“Since 1978, the gross domestic product in China has grown, on average, from eight to 10 percent annually,” Gardner said. “The U.S. and the European Union need to be very cautious at pointing the finger at China because much of the pollution they put into the air is from exports, and who are the ones buying the exports?”

The U.S. and China are the world’s leading emitters of carbon, and the December 2015 United Nations Climate Summit in Paris will drive these two nations to put forth more initiatives on the issue. According to Scholl, the real challenge is coming up with solutions.

“If there are global solutions to climate change and pollution, it is going to come from China,” Scholl said. “They are really on the cutting edge of research and development, and it would be economically expedient for them to come to a solution. The fact that it’s a huge problem in China is a greater incentive for them to find a solution that will work everywhere.”

According to Gardner, if China cannot come up with a solution on its own, it will be an opportunity for the U.S. to work with them, helping the two nations maintain a relationship while trying to curb emissions.

“Neither of us has anything to win by continuing these isolated paths.” Gardner said. “This is an area where we can make a great deal of progress together.”