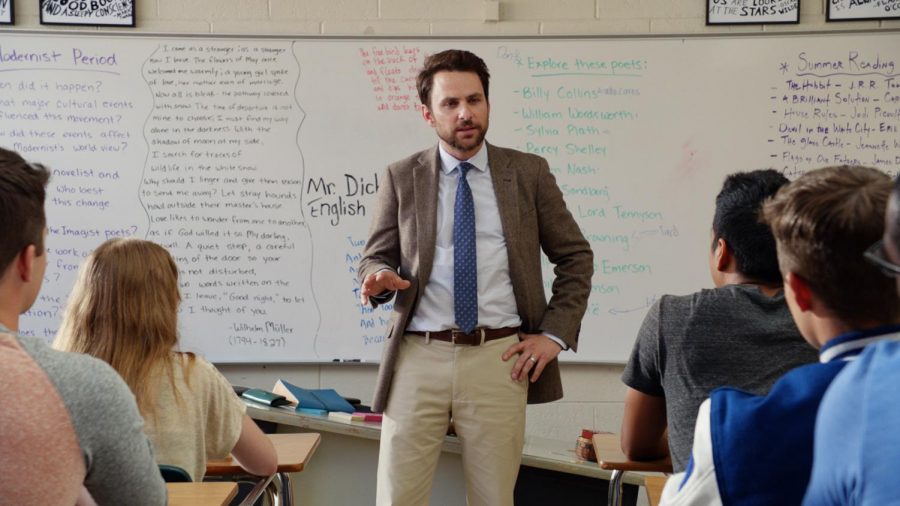 Charlie Day and Richie Keen’s laughter filled the small conference room at the Chicago Athletic Association, 12 S. Michigan Ave., as they discussed their TV show “It’s Always Sunny in Philadelphia” and advice they got from their parents.

Day barely contained his excitement about being in Chicago for the first time. Keen, a Chicago native, patiently waited to show Day his favorite town.

Besides exploring, Day and Keen were in Chicago to promote their upcoming movie “Fist Fight” that  is scheduled to be released on Feb. 17. The all-star cast, which includes Tracy Morgan, Ice Cube, Christina Hendricks, Kumail Nanjiani in addition to Day, is  directed by Keen.

The movie depicts high school English teacher Andy Campbell, played by Day, as he gets closer to the bell that will begin his “Fist Fight” with a teacher—played by Ice Cube—whom Campbell accidentally got fired. Campbell, who already has too much on his plate, with his wife expecting their second child and his daughter being bullied, goes through drastic measures to get his life back in order, while trying to not get beaten up.

The Chronicle spoke with Day and Keen about the movie, comedy and some of their own experiences with  fights.

THE CHRONICLE: How did you make such a low-stakes fist fight feel like the end of the world?

CHARLIE DAY: When you are my size and your wife is about to have a baby, you might lose your job, your daughter is being bullied. On top of that, Ice Cube wants to beat you up. There is nothing low stakes about that for my character.

RICHIE KEEN: When you look at the poster you think, “What fight? Ice Cube is going to hit him one time, Day is going to fall down and start crying, and it is going to be over.” So it was really fun to design that tension.

What is the best part of being in Chicago for the first time?

DAY: I have wanted to go to Chicago for years. There was a moment when I was starting out my career that I said, “I am either going to New York City or I am going to move to Chicago.” I knew one person from New York, and I knew nobody in Chicago, and I said, “Well, maybe I’ll go to New York because I know that one guy,” but I have always loved Chicago.

Everyone has been asking me, “Why do you have so much energy?” It is because I am so excited to finally be in Chicago. I want to have more time here. I want to go to a comedy show and I wish I could go to a baseball game. But I’ll come back for sure.

Did you ever witness a fight like the one between the character?

DAY: When I was in junior high school, I switched to a bigger public and more intense school. I remember the very first day during lunch there was a girl who got in a fight with another girl, and she got up across the table and she ripped the other girl’s earring out of her ears. There was blood everywhere, and I thought, “Oh my god, this is a whole different ball game.”

What inspired you to touch on topics that are not normally talked about in comedy?

DAY: That is why “It’s Always Sunny in Philadelphia” has been on for 12 years, if our episodes weren’t rooted in issues or problems of society today, people would have said, “OK I think I have had enough of people being wacky for no reason.” This movie helps you sympathize and understand the characters.  Ice Cube’s character could have easily been “a scary mean bad guy,” but you actually understand why he wants to have a fight beyond getting fired. You understand that he is trying to prove something.

Why did you focus on cast chemistry rather than set up comedy?

KEEN: Your comedy is only as strong as the characters that you have in it, in my opinion. I think I have learned so much from working on “It’s Always Sunny in Philadelphia”  because they tackle real issues that you don’t even almost realize it until it is over. I think without the right characters, who cares that they are getting in a fight.

What was it like working with an all-star cast?

KEEN: My goal going in was to find the most amazing and bizarre combination of people—to find the funniest people on the planet and put them next to the people that you didn’t know were the funniest people on the planet. [In the script, actress Jillian Bell’s] role was written for a guy; [Morgan’s] role was written for a younger white guy; and Nanjiani didn’t have a role in the movie. Charlie came over and in about 90 minutes, we wrote all of these scenes for him. Then I kept thinking Christina Hendricks next to Ice Cube is so bizarre, and Tracy Morgan next to Dean Norris is so bizarre. My hope is that when you see the movie; you would just [think] this is such an original group of people to all be together.