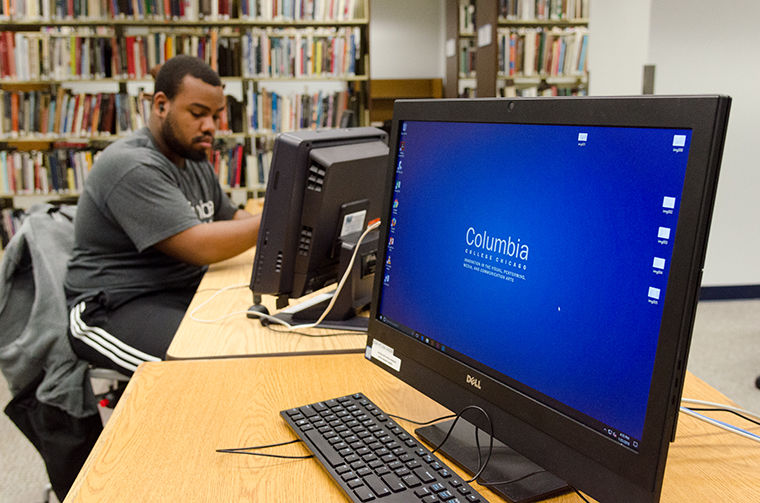 New computer stations have opened throughout the various floors of Columbia's Library, 624 S. Michigan Ave., as part of the college's initiative to reopen lab spaces Jan. 22.

Students will soon be able to use a computer lab once again outside of the Library starting in early February, according to a Jan. 22 email sent to students from President and CEO Kwang-Wu Kim.

Three on-campus Open Labs closed Sept. 5, 2017, as part of the college’s plan to expand student resources within a single centralized location at the Library, 624 S. Michigan Ave., as reported Sept. 11, 2017, by The Chronicle. Due to student feedback, the college decided to reopen the lab at 1104 S. Wabash Ave., according to the email.

During Let’s Chat with Dr. Kim sessions, students and the Student Government Association aired opinions about the closed labs throughout the semester to Kim and his cabinet, according to Malik Woolfork, SGA president and senior business and entrepreneurship major.

“It has always been a mission of student government to provide spaces where the administration and students can meet and talk and discuss different issues,” Woolfork said.

Kim said he and his staff noticed the problem of having a spread-out campus and aimed to bring students together by centralizing technology at the Library, but students who spent most of their time at the campus’ south end did not find it convenient to travel there.

“We realized it was having much more of a negative impact on students than we had anticipated,” Kim said.

While the move increased resources for students, lab employees were unexpectedly laid off from their fall positions a few days before they were closed and the semester officially began. Noting the abruptness of the original closing to students, Kim said it was important for him to send out a message to notify students of the new adjustments. The college has also reached out to students for future employment at the labs, he added.

“Students are enjoying being able to print on all floors,” Chindlund said. “We didn’t have that before. We had printing on basically two floors, first and second. But with this new upgrade, [Information Technology] helped us get printing on all floors.”

Printer kiosk station solutions around campus are still being discussed among Kim, Information Technology and SGA, according to the email.

The printing access will help improve the overall student experience, Woolfork said, adding that the lab reopening is a good decision by the college’s.

“It shows the administration was listening and not afraid to correct wrong moves,” he said. “That is very important when you are in charge of anyone. You should never be afraid to admit this might not have gone the right way. It has moved toward the right direction.”

Kim said the college will only open the 1104 S. Wabash Ave. lab at this time but will be actively listening to student feedback and adjust accordingly to fit to student needs.

“What is important to me about this college is trying to become a truly student-centric institution where we are always trying to find a good way to make sure that students input is a part of decision making,” Kim said. “We have made some progress, but we still have a long way to go.”