Best Coast and Wavves make a splash at Thalia Hall 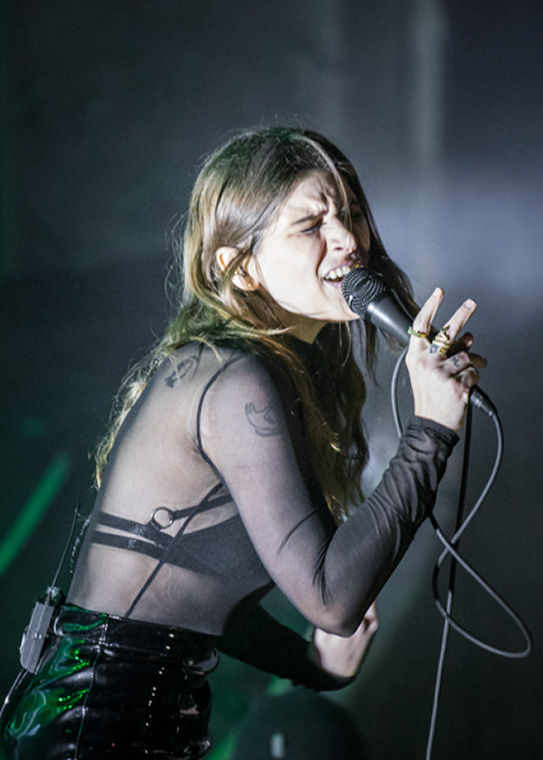 Best Coast’s Bethany Cosentino ended the Feb. 25 show at Thalia Hall, 1807 S. Allport St., by thanking the crowd for “being weird” and giving them a “peace out.”

Best Coast and Wavves worked together at the bands’ Feb. 25 show to create an atmosphere where it was OK to go from swaying gently and bobbing your head to the beat to jumping around, headbanging and throwing beer cans.

The bands, with openers Cherry Glazerr, have been double-headlining venues across the country since Feb. 11 for their Summer is Forever II tour, which visited Thalia Hall, 1807 S. Allport St.

Cherry Glazerr started the night on time with “Had Ten Dollaz,” which was full of instruments played with obvious proficiency and a lot of scream-singing. Frontwoman Clementine Creevy admitted she was losing her voice, which could have been the result of the lyrics being sung in a loud and unintelligible manner.

Creevy appealed to a large percentage of the audience, belting out the line “Rob Kardashian’s a tool,” from the song “Teenage Girl,” even though the line did not make much sense alongside lyrics like “Pink sparkly sunglasses; lemonade by the pool.”

Best Coast was met with loud cheers as the band took the stage and started immediately with “When I’m With You,” followed by the very similar but equally catchy “Crazy for You,” both songs from the band’s debut album Crazy for You. During the chorus of “Crazy For You,” lead singer Bethany Cosentino had the crowd clap along with her, which was met by enthusiastic responses for a few seconds before everyone reverted their attention back to their drinks and Snapchats.

The band has two official members—Cosentino on lead vocals and guitar and Bobb Bruno on guitar, bass and drums—and three touring members—drummer Brady Miller, Brett Mielke playing bass and singing backup, and Joe Bautista on guitar and keyboards. Miller, Mielke and Bautista fit well with Cosentino and Bruno to the point that nonfans would be unaware that they are not officially part of the band.

Throughout the show, Cosentino switched between singing with just the band and singing while playing guitar and banging on the tambourine. Cosentino’s versatility and voice, which is commanding and loud while maintaining clarity and integrity, were highlights of Best Coast’s performance, along with the tambourine’s star shape.

Cosentino prefaced “Goodbye” with a screamed, “F–k Donald Trump,” which did not make much sense in context but was affirmatively received by some of the loudest cheers of the night.

Wavves took the stage soon after Best Coast and had a louder, more rock ‘n’ roll sound of long guitar riffs accompanied by “oohs.” The band felt more like Cherry Glazerr with some vocals that were yelled incomprehensibly, but that did not necessarily detract from the set.

Wavves created an atmosphere where it was somehow OK if one was to only catch bits and pieces of frontman Nathan Williams singing lines like “It gets better” and “My toes are marble stones.”

Williams on lead vocals and guitar messed up the set list when he prefaced the song “Idiot” by saying, “This is a love song, so make some love,” which was meant for the song after that one: “Pony.” Williams admitted to his screw-up after receiving confused looks from his band members and said he wrote “Idiot” about himself, so it could be a self-love song.