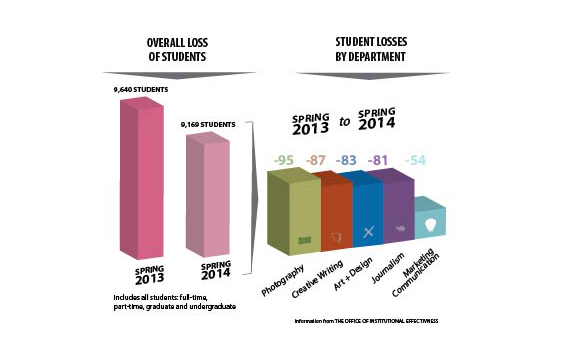 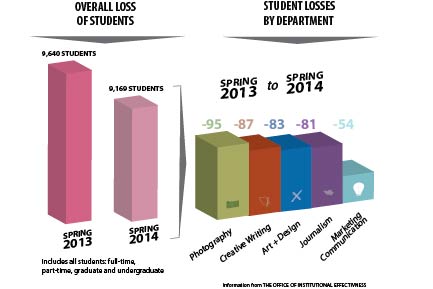 As the Spring 2016 Semester begins to wind down, students, staff and faculty are attempting to imagine what Columbia’s climate will be like next fall.

With a handful of new hires or promotions already announced throughout the last several weeks, some are wondering what additional changes may be unveiled during the summer months.

As reported in the Front Page article about the most recent appointments within Columbia’s administration, a newly hired Vice Provost for Digital Learning, Robert Green, is expected to develop improved online education programs, which are intended to boost the college’s enrollment for online learners.

Senior Vice President and Provost Stan Wearden said in the same article that Green’s position will “more than pay for itself.”

While Wearden appears to be optimistic about the college’s future enrollment numbers, an April 14 Crain’s Chicago Business article reported that President and CEO Kwang-Wu Kim said in an interview that he expects next year’s enrollment numbers to land within the range of 8,000 total students, a loss of roughly 100 students, and that the college’s budget would decrease as a result.

This comment suggests the administration expects a relatively small loss in enrolled students or stagnant results at best.

The prediction of a loss of only about 100 students seems conservative.

There is a very real possibility that Columbia could face losing as many as 2,000 students who rely on state-funded aid in light of the college’s April 4 announcement that it is currently unable to fund Monetary Award Program grants for the 2016–2017 academic year—a far greater potential loss than that reflected in Kim’s recent interview with Crain’s.

The college’s five-year Strategic Plan includes optimal sizing as a goal on Columbia’s to-do list, but the meaning of this is unclear.

In hindsight, Columbia could have reasonably made many more efforts to attract new students to the college throughout the 2015–2016 year.

The college’s Spring Open House is Columbia’s most robust event planned yearly to entice prospective students to commit to the college.

But only 54 percent of those who had RSVP’d to the event actually showed up, as reported April 11 by The Chronicle.

The article also stated that nearly 400 fewer prospective students had RSVP’d to this year’s event than last Spring’s Open House, raising the question of whether the lack of interest in or awareness of the event could be due to the college’s branding and marketing initiatives, which have been delayed and progress reports are vague.

Expecting prospective students to commit to a college without a clear identity is a reach.

It’s understandable that redefining the college’s brand should be done with great care, especially as Columbia wrestles with incorporating entrepreneurial skills into its arts and media focus.

However, the effort and revenue put toward the beginning stages of developing the upcoming student center and the hiring of Green to promote further integration of online learning platforms before such a program has even been created show a clear lack of regard for the students who are already enrolled.

It seems more attention is being directed toward the student center than the current and prospective students themselves, likely because it will be known as Kim’s legacy.

But what doesn’t add up is why paying another higher-up’s salary is more valuable to the administration than using those funds to at least retain the students who are already here.