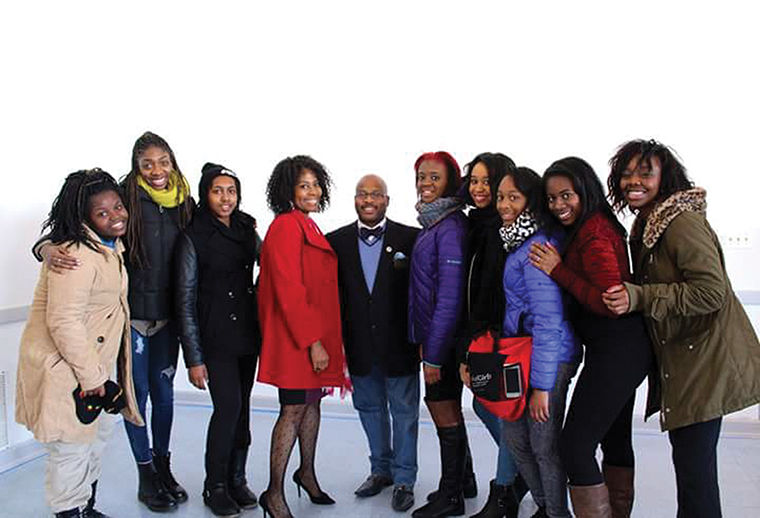 A small, old white building with a maroon awning on Chicago’s South Side appears to be vacant from the street view. But a look behind its closed doors reveals a bustling interior.

Walls are lined with pictures of smiling children and award plaques, and laughter and scuffling sounds are heard in the Global Girls rehearsal studio adjacent to the lobby. The high school and elementary school students, all members of Global Girls, are telling jokes, running around the rehearsal studio and hugging friends.

Global Girls is an after-school organization that is part of Chicago’s After School Matters program at 8151 S. South Chicago Ave. in the South Shore neighborhood.

Founded in 2000 by Marvinetta Woodley-Penn, the organization provides a safe space from gangs and violence in the area and gives neighborhood youth the opportunity to express themselves through dance, acting and emotional growth activities with peers and teachers.

Woodley-Penn, who taught high school English and theater for 19 years in East St. Louis, Illinois, said her career made her realize how differently black and white residents are perceived in various communities. She said it ignited her passion to help black youths understand those perceptions and combat negative stereotypes.

“We work with [youth], showing them they have a voice, that they can be listened to,” Woodley-Penn said.

The program, designed for black youth ages 8 to 18, is meant to bolster students’ confidence.

The name of the organization is Global Girls, but it is also inclusive of young boys, whom Woodley-Penn said are encouraged to join.

“We are showing young people that they are not the ‘other,’” Woodley-Penn said. “They are the people; they are whole and healthy just the way they are.”

Global Girls hosts weekly open mic nights on Fridays at the studio, culminating in a final performance May 11, said Tiffany Bean, a teaching assistant who participated in and graduated from the program.

Woodley-Penn said the organization aims to show how black people are treated differently in other parts of the world than they are in Chicago and the United States. She said they are often seen in a more positive light and with greater recognition of their culture outside of the country.

Kenya Brathwaite, a 13-year-old who attends Robert A. Black Magnet School at 7133 S. Coles Ave., traveled to Mombasa and Nairobi in Kenya for two weeks to work with girls her age.

“It was great seeing how much fun they have with the little [food and games] that they have,” Brathwaite said of her visit to a girls school in Nairobi.

Woodley-Penn said the organization’s travels set it apart from other after-school programs.

Although the opportunity to travel is infrequent, the organization has completed five trips, four to Africa and one to Spain.

She added that grants sometimes help fund the trips, but families at times use personal funds to travel, as Brathwaite did.

“I should be more grateful for what I have, and I am no different from any other girl anywhere else,” Brathwaite said.

“We take the youth-driven stories, and we take the Second City approach to [the way they are told], where almost all [of them] are improv,” Bean said.

Bean added that all original performances stem from personal stories. The current rehearsal for the company’s final show was inspired by a story told by Gabriel Hawkins about a family argument that took on a comedic perspective.

Hawkins, a junior at De La Salle Institute in the Douglas community who has been with Global Girls since the fall of 2015, said participants in the program treat one another as family.

“It is a good environment and takes you off the street,” Hawkins said. “You don’t have to worry about being in the street or anything happening to you because you know you are in this organization.”

Brathwaite’s mother, Stephanie Miller-Brathwaite, said the organization is important because it provides safety from youth violence in the neighborhood while teaching participants various skill sets.

“It is a safe space where the things that they are able to discuss stay within the group [and] give them the sense of trust,” Miller-Brathwaite said.

She said she applauds the program because it offers a place for girls and boys to become well-rounded and learn skills that are not commonly taught in school.

Hawkins said being part of the group taught him the importance of having a support system beyond family and school.

The program is predominantly female, but Hawkins said the gratifications from the program, like close male friendships and a place to share personal stories, are why he is part of Global Girls.

“Having somebody that is there for you is always good,” he said. “You really do have to have those types of people that can hold you up and can lead you to the right direction.”