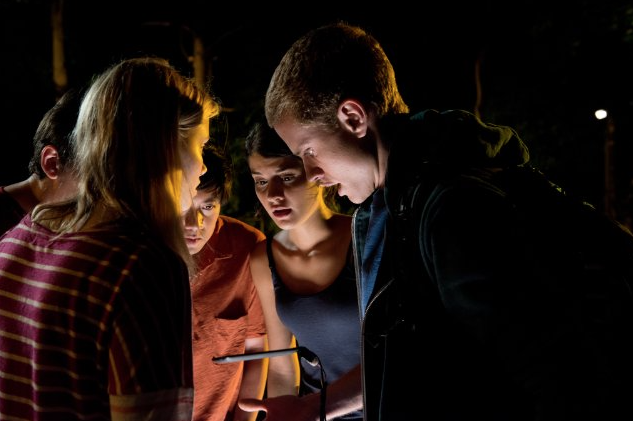 “Project Almanac,” a time-traveling teen comedy, is what happens when MTV grabs a conceptual high-brow sci-fi script and tosses it around a writer’s room injecting phrases like “dude” and “babes” and “fricken’ awesome.” With a loose grasp on the camera and general time-traveling concepts, “Project Almanac” eschews logic for laughs, which makes for a fun yet forgettable ride.

A group of high school science geeks led by character David Raskin (Johnny Weston of “Taken 3”) explore the wonders of modern science while waiting to get acceptance letters from the illustrious Massachusetts Institute of Technology. Raskin, failing to get the scholarship he needs, must create an experiment that will get MIT’s attention. Raskin discovers the blueprints for a “temporal displacement device” in his basement, a machine that travels through time, which he proceeds to use for the rest of the movie.

The found footage gimmick becomes essential to the story as it takes the audience through space-time for the rest of the film, but with no indication of when or where the logistics are, they become lost in translation and the only real constants are the characters. Metal objects begin to inexplicably rise and there is palpable electricity all around. The credibility of the handheld camera is lost the first moment they jump through time, the special effect working more like shoddy dubstep than temporal displacement. They start to see footage that they never could have gotten before and record dialogue the microphone would have never been able to pick up with the handheld camera. Still, their journey through time is a success. In spite of all the references to time travel movies like “Time Cop,” “Bill and Ted’s Excellent Adventure” and “Back to the Future,” the teens fail to foresee the predictable Butterfly Effect—unintentional reactions in the future made to obscure actions in the past—making fickle ripples through their chaotic timelines.

Systematically, they experience almost every high school fantasy: scoring the girl, getting an A on the big test, beating the bullies at their own game and winning the lottery. However, the repercussions of their actions catch up with them when they unintentionally cause a plane crash, consequently changing history. Raskin, high off the power of his creation, tries to fix the Butterfly Effect himself, betraying his friend’s promise to only travel together. He makes a series of temporal leaps that make time buckle and the logic of the film crumple. The football team lost, a plane crash killed everyone on board—yet when all that is fixed, his friend is paralyzed by an accident.

Like teenagers, the film is desperate to make itself cool. Suddenly, they are on stage with Imagine Dragons. The machine is literally built from an Xbox while they listen to the newest alt-J song. A spiraling and confusing adventure ends with a shrug and a wink, blatantly refusing to tie up any loose ends or any real character development, instead roaring a reprise of “Jungle” by Jamie N Commons and the X Ambassadors.

As he buys a Maserati, Raskin’s friend laughs “I love time travel.” Unintentionally, this is the closest “Project Almanac” comes to a theme.  The unfocused morals and quick mood shifts wrench the viewer out of the movie and back into their seats, wondering why they are watching a movie made for 16-year-olds.