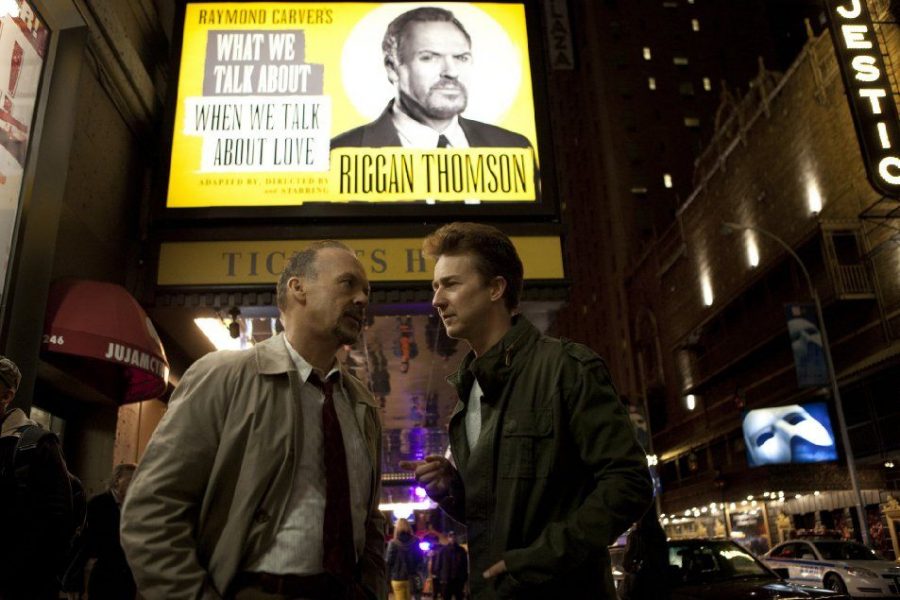 Everybody loves a great comeback story—stars such as Robert Downey Jr. and Betty White have done just that, disappearing from the spotlight and reemerging in roles that reenergize their careers. Now it is Michael Keaton’s turn. Although he became recognizable in 1989 for starring in the blockbuster hit “Batman,” his career has faded in recent years. However, his latest film, “Birdman,” puts Keaton back in the public eye with a compelling performance that is a standout in his 40-year career.

Keaton plays Riggan Thompson, a washed-up actor known for his role as the superhero Birdman. Thompson writes, directs and stars in a Broadway adaptation of Raymond Carver’s book “What We Talk About When We Talk About Love,” but things begin to crumble before the preview performances begin. After a light falls from the ceiling and knocks out one of Thompson’s co-stars, a talented stage actor named Mike Shiner (Edward Norton) is brought in to replace him. Shiner’s presence creates problems for Thompson and the rest of the cast. Amid the chaos, Thompson hears the voice of Birdman in his head, mocking and calling him a failure. He struggles to control his show and maintain sanity as opening night approaches.

The decision to cast Keaton carries extra meaning because his own career mirrors Thompson’s. He played Bruce Wayne/Batman in both of Tim Burton’s films and has since starred in several smaller roles, never quite achieving the level of fame he once had. Thus, Keaton is able to inject a brutal dose of sincerity into what could otherwise be a tepid, cliche role. He has a deep understanding of Thompson’s desire to become relevant again and perfectly juggles anxiety, anger and insanity to create a brilliantly compelling character. Keaton also provides the voice of Birdman, giving extremely  hilarious commentary for the audience on Thompson’s

The reporters, actors and even the voice of Birdman constantly question Thompson’s intentions. Is he doing this play to satisfy his need to be admired or to truly create a meaningful piece of art? He constantly struggles to validate himself and his career through this play even at the expense of his relationships with others, to which his daughter Sam (Emma Stone) responds, “You’re doing this because you’re scared to death—like the rest of us—that you don’t matter. And you know what? You’re right. You don’t.” It is Thompson’s riveting existential crisis that drives him to near insanity, causing him to start having visions in which he stumbles across Birdman himself.

Norton steals the spotlight in several scenes. Carrying himself with charisma, he is one of the funniest characters in the film. Shiner goes to absurd lengths to deliver the best performance possible, most of which involve undermining Thompson’s authority. This goes from drinking stiff gin during a dinner scene to suggesting Thompson should get a real gun instead of a prop for the play’s climax. Shiner is a talented actor and he knows it. His ego has him butting into the lives of the other cast members and

Dueling writer and director Alejandro González Iñárritu, known for “Amores Perros” and “Babel,” has crafted one of the most tremendous technical feats in years. The entire film is edited to create the illusion that it was shot in a single take, evoking the effect of a stage play. With the exception of some brief shots in the beginning and ending, there is not a single visible cut. Editors Douglas Crise and Stephen Mirrione use clever effects to stimulate seamless transitions. In one instance, Thompson throws a vase of flowers at a wall. The camera whips around to follow the flying vase as it crashes against the wall before moving back slowly to reveal a brand new scene in the same location. Cinematographer Emmanuel Lubezki, who won an Oscar for his work on 2013’s “Gravity,” fluidly navigates the camera through the halls of the theater, moving from one character to the next without stopping in one place for more than a few moments. Although there have been many memorable long takes in film history, this one lasts for a solid two hours and the ending results are fantastic.

Evocative of a true spectator, the continuous film hammers the underlying point of the story: No matter how important or famous people think they are, the world does not revolve around them and time keeps marching on.