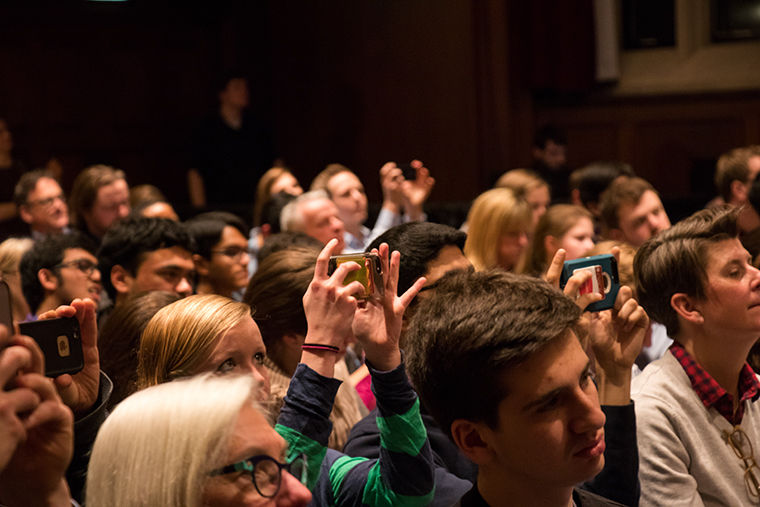 Students and others listen as U.S. Ambassador to the United Nations, Nikki Haley spoke at the University of Chicgao Institute of Politics in her first ever visit to a university.

Before current U.S. Ambassador to the United Nations Nikki Haley started her job, former Secretary of State Henry Kissinger gave her this advice: “Put yourself in your adversary’s shoes, understand what he or she wants and use that to guide your negotiations. You don’t have to agree with them, and most of the time you won’t, but you have to understand where they’re coming from.”

At a Feb. 22 University of Chicago Institute of Politics event, Haley addressed an audience of students, faculty and politicians about her current role as the country’s chief representative to the U.N. and the way she uses policy as a global voice for the American people.

“Real leadership is bringing people around to your point of view by showing how it is in their best interest,” Haley said. “Recently, there seems to be more of an inclination to seek virtue in our differences than build on what we have in common. That can be a recipe for an endless conflict.”

Haley, the former governor of South Carolina, responded to questions from U of C students and David Axelrod, director of the Institute of Politics and former senior adviser to former President Barack Obama.

Along with advocating for a halt in trade to North Korea due to its threatening nuclear program, Haley said Russia is defending Syria’s chemical weapons’ use and has meddled in U.S. elections. Referring to Special Counsel Robert Mueller’s recent indictments of 13 Russian officials, Haley said Russia’s new weapon of choice is election interference.

Axelrod responded that while Haley has consistently made strong comments about Russia’s wrongdoings, President Donald Trump has dismissed the issue. Axelrod also remarked on the country’s U.N. allies’ criticism on moving the U.S. Embassy in Israel from Tel Aviv to Jerusalem.

“This was our decision. We did not say anything about defining the borders of Israel, or the peace process—that is for the Israelis and the Palestinians to decide,” Haley said in response.

Axelrod defended American allies who recognized the gravity of the decision.

“Presidents—Republican and Democrat alike—who preceded this presidency all had the same policy which was to keep our embassy in Tel Aviv because the status of Jerusalem is so central to the prospect of negotiating some sort of peace between the Israelis and Palestinians,” Axelrod said.

Haley said she supports Trump’s plan to “keep Americans safe” by not allowing Syrian refugees in the U.S. for security reasons and a lack of information about the refugees. But the U.S. is currently investing in infrastructure like hospitals and school for countries with Syran refugee camps, such as Jordan and Turkey, she added.

As a daughter of Indian immigrants, Haley said she benefited firsthand from immigration, “the fabric of American life.”

The most anticipated question was asked by a U of Chicago student through Axelrod: Do Trump’s tweets affect U.S. diplomatic relationships with other countries?

“When I wake up, I often don’t know what [Trump] is going to tweet about, so we are always moving through life with his tweets in mind,” Haley said. “I found in the U.N., [diplomats] are glued to his tweets. That is the president speaking directly and not through the media—they take every word he says seriously and act accordingly.”

Katie DeLong, a freshman biology and biochemistry student at U of C who attended the event, said Haley’s take on policy—with Kissinger’s advice—is important because no matter the realm of study, people need to be interdisciplinary in order to understand exactly how their discipline can make a difference.

DeLong said she expects a formal position from politicians when releasing statements, and it is “jarring” when Trump tweets “adhominem” attacks.

“It is strange and worrying that he can make a statement so quickly, without consultation of other people,” DeLong said. “But at the same time, he was elected to his position, so that is within his power to do so. It’s important that he is recognized as a world leader but because of the lack of forethought that appears to go into some of these tweets, I can see a time where that could be detrimental to our plans.”