Street performers could be forced to new venues 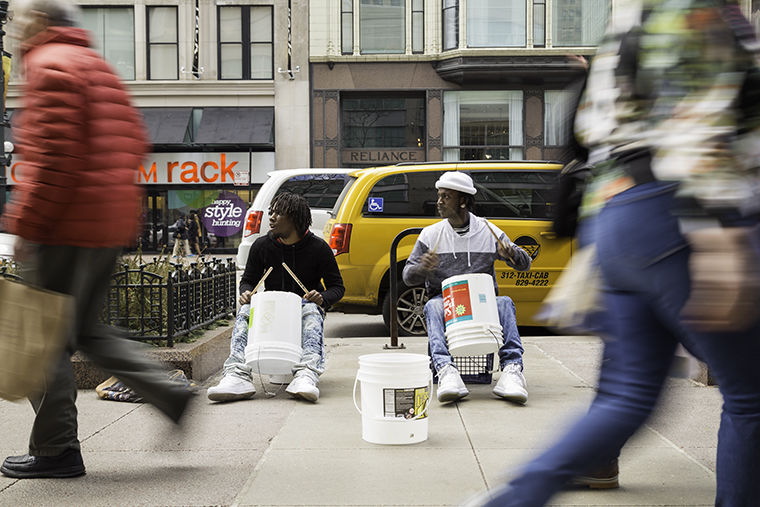 Street performers Devontay Wood (left) and Jordan Jones said it is their “passion” to play the bucket drums on State Street, one of the areas a proposed ban would bar them from playing.

The ability to perform music on the street means everything to George Banks, who may not be able to continue in light of an ordinance set to be voted on by City Council.

Banks, a Chicago percussionist, vocalist and guitarist has played in the city for 30 years.

“I do it because it makes people happy [and] makes [people] smile,” Banks said. “Psychologically, I feel better. I have to get it out of my system. It’s a part of my life.”

Banks and other Chicago-area street performers are facing a ban proposed by Ald. Brendan Reilly (42nd Ward) and Ald. Brian Hopkins (2nd Ward) to bar street performers on State Street and Michigan Avenue—some of the areas with the heaviest foot traffic—unless their music cannot be heard outside of 20 feet.

“Why is it that other cities such as New York celebrate their street musicians and they don’t do that here in Chicago?” Banks said.

City Council was scheduled to vote on the ordinance during its Feb. 22 meeting but deferred its vote to the next Council meeting March 29.

A Feb. 22 emailed statement from Reilly’s office confirmed he met with street performers and their representatives to review the ordinance before the Feb.  22  meeting. The email stated that Reilly has made a commitment to the performer community to find new locations that would allow them to perform, while also providing relief to downtown residents and office workers.

Prior to the City Council meeting, the American Civil Liberties Union of Illinois sent a letter  Feb. 21 urging aldermen to not pass the ordinance, according to Rebecca Glenberg, an ACLU Illinois senior staff attorney.

“The current street-performer ordinance has serious constitutional problems, and this proposal would have created even more First Amendment problems, “ Glenberg said. “[It] would almost certainly would be unconstitutional.”

Glenberg said the ACLU wants the proposed restrictions withdrawn and to see some revisions to the current street performer ordinance to better protect performers’ rights to expression.

“We understand the need to regulate excessive noise in the city,” Glenberg said. “But we think that can be done without singling out street performers [with an] excessively burdensome regulation.”

Banks said the street performers’ music is important for the city’s culture to thrive. To some performers, being able to play on the streets means a lot more than entertaining crowds, he added.

Ian Walsh, who plays guitar outside the Richard J. Daley Center, 50 W. Washington St., said being able to play “means [performers] can eat and have a roof over [their] heads.”

He and his bandmate William Nevin agreed that street music contributes to Chicago’s culture.

“It’s really part of what makes a big city—having people come out and play music in the  street,” Nevin said. “Out here, you know where you stand with people.”