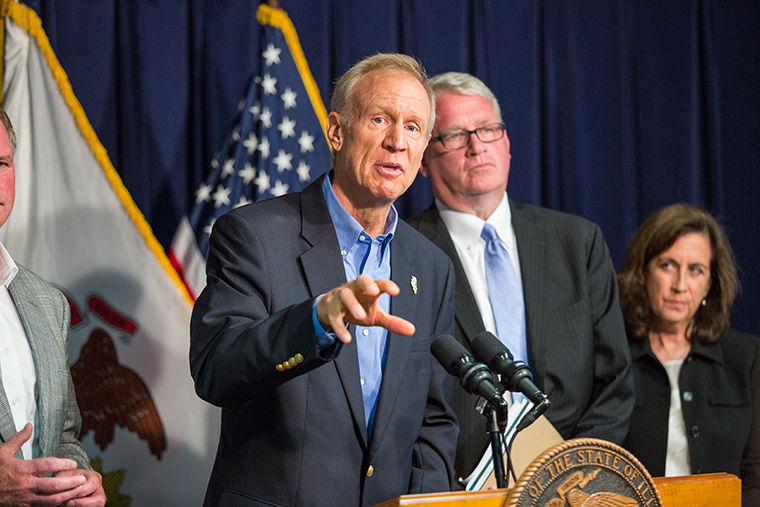 Gov. Bruce Rauner accused the Democratic lawmakers of toying with children's education to achieve their political agenda at a July 24 press conference.

Public schools may still not open on time, even though the Illinois legislature passed its first budget in more than two years.

The Illinois House overrode Gov. Bruce Rauner’s budget package veto July 6, enacting the state’s first full budget since July 1, 2015. The state has survived with short-term stopgap budgets, the last of which expired Jan. 1. However, missing from the spending plan is a blueprint to fund public schools.

Senate Bill 1, Evidence-Based School Funding, would steer money to the state’s 852 school districts based on local property wealth and student-population needs. It passed both state legislative chambers but was put on hold by Senate democrat leaders because of Rauner’s veto threats. Democrats lack a three-fifths majority in order to override a veto by the Republican governor, according to state legislative records.

“The democrats in the majority are playing political games with our children’s education,” Rauner said at a July 24 press conference at the James R. Thompson Center, 100 W Randolph St. “They seem content on denying days of education to our children to advance their own political agenda. It’s fundamentally wrong and unfair.”

If SB1 or an alternative bill is not passed, public schools will not receive the state funding needed to open.

Rauner said there is no reason for SB1 to not be on his desk and has vowed to issue amendatory vetoes when it does. His main objection to the bill is an amendment that would provide $215 million to CPS’ pension fund. However, Rauner was silent when reporters asked about an amendment that would provide CPS with $250 million in block grants. CPS is the only school district in Illinois that funds its own pensions. He has accused the bill of giving Chicago more than its equitable share at the expense of downstate school districts.

After democrats failed to meet Rauner’s noon deadline July 24, to send the governor SB1, Rauner called legislatures to Springfield for a special session starting July 26 to create an alternative funding formula by July 31.

“Let’s be clear, the Illinois school funding system is antiquated and unfair,” House Republican Leader Jim Durkin said at the press conference. “SB1 does not fix the decades of problems with school funding, but rather enforces it.”

“This is a time in the year when parents should be buying backpacks instead of worrying about whether or not schools are going to be open for their children,” said Brady.

“Calling a special session to address school funding reform is a wasteful gimmick the governor is using to distract from the real issue,” Manar said in the statement. “The real issue is that the governor refuses to reveal what alleged problems he has with SB1 and will not negotiate in good faith.”

Illinois Senate President John Cullerton has been calling for a meeting with Rauner and the three other state legislature leaders to discuss the school funding formula.

“I’d like to have a conversation with Gov. Rauner in hopes of getting some clarity as to exactly what is going on,” Cullerton said in a July 24 public statement before the governor called for the special session. “We slowed down the process in the Senate in order to let everyone blow off some steam, politically speaking.”

Mayor Rahm Emanuel’s administration has continuously accused Rauner of being unable to compromise.

“[Rauner] promised to veto an education funding bill that by his own calculations gets him 90 percent of what he wants,” Adam Collins, Emanuel’s spokesman said in a public statement.

Emanuel and CPS CEO Forrest Claypool have insisted on several occasions that Chicago schools will open Sept. 6, the start of the academic year, regardless of action in Springfield.

“Rauner is holding children across the state hostage as bargaining chips for his political agenda, but we won’t let Chicago children be used as pawns in his game,” Claypool said in a July 20 press release. “We will do what is necessary to keep our schools open and maintain the historic academic gains we have made these past few years, including continuing our efforts to reduce bureaucracy while investing money directly in classrooms.”

Chicago Teachers Union President Karen Lewis has also criticized the bill. She suggested the political war between Rauner and Democratic-controlled state legislature, along with Emanuel, have divided Illinois.

“SB1 is a good start, but it’s not the answer because it doesn’t fully fund schools. Not just here but anywhere in the state of Illinois,” Lewis told reporters at a July 20 press conference. “Why are we pitting people against one another? Why are we pitting Chicago against the suburbs?”

Lewis was skeptical about the enrollment estimates and continued her harsh critiques of CPS and Emanuel.

“For the third year in a row, CPS leaders have provided a budget to schools without any idea of how to pay for it,” Lewis said.

In June, CPS took out two separate short-term loans totaling nearly $400 million, at high interest rates, to keep schools open to the end of the year and make pension payments.

Lewis, along with CTU leadership, continued to call for City Hall to generate new revenue for CPS by redirecting Tax Increment Financing funds and creating corporate head taxes. Lewis said the wealthy use “Chicago as its playground,” and the city’s tax system pushes low-income families out as opposed to corporations.

“While the latest budget does signal the district is getting serious about financing obligations to our new contract and special education, it does not go far enough to address all the critical needs of CPS students and their families,” Lewis said.

State Sen. Donne Trotter, D-Chicago, removed a procedural hold on Senate Bill 1 July 31, which kept it off Rauner’s desk. The bill was then sent to Rauner, who issued the amendatory veto the next day, according to state legislative records.

“With my changes, our state ensures that enough resources flow to children in the poorest and most disadvantaged school districts across the entire state,” Rauner said in his Aug. 1 veto statement. “My changes ensure that the education funding system in our state is fair and equitable to all students in Illinois.”

SB1, Evidence-Based School Funding, would steer money to the state’s 852 school districts based on local property wealth and distinct student-population needs. It passed both state legislative chambers in May but was put on hold by Senate democrats because of Rauner’s veto threats. The governor’s veto removes CPS’ $250 million block grant and $215 million in pension assistance, according to Rauner’s press release announcing the veto.

Rauner reportedly launched the Illinois School Funding Reform Commission in 2016 to create a bipartisan, fair and equitable funding system for public schools. The governor said the bill does not meet the recommendations established by the commission, according to the press release.

“These changes included in my amendatory veto reflect years of hard work by our education reform commission and our ability to overcome our political differences for the good of our young people’s futures,” Rauner said. “I urge the General Assembly to act quickly to accept these changes and let our students start school on time.”

A three-fifths majority is required in both state legislative chambers, 71 in the House and 36 in the Senate, to either override Rauner’s veto or accept the recommendations. SB1 passed both chambers in May below the threshold, 60–53 in the House and 35–22 in the Senate. If the veto is neither overridden nor accepted within 15 days, the bill will die, and lawmakers will have to start over, according to the Illinois Constitution.

Democrats will need republicans to cross party lines as they did July 6 when they overrode Rauner’s budget veto.

“House democrats will continue to reach across the aisle and work with legislative republicans in order to enact bipartisan education funding reform,” House Speaker Michael Madigan said in a public statement in response to the veto. “Every child in Illinois deserves a great education, but too many are being held back by one of the most unfair funding formulas in the country, and the reform we need is being held back by a governor who is determined to pit one child against another for political gain.

Illinois democratic Comptroller Susana Mendoza, who is is one of Rauner’s most vocal critics, said the governor’s “Chicago bailout” claims are unwarranted, citing a recent analysis by the Better Government Association’s Politifact Illinois. If SB1 or an alternative bill is not passed, the comptroller’s office will not have legal authorization to write public schools their Aug. 10 checks, according to a Aug. 1 press release.

“[If a school funding formula is not passed,] Rauner will be the first governor in our state’s history to force Illinois schools to go without General State Aid payments,” Mendoza said. “Another trophy for his Hall of Shame.”

Rauner’s veto hurts Illinois’ school children, teachers and superintendents and ignores the voices of newspaper editorials and his own commission’s recommendations, Mayor Rahm Emanuel said in a public statement.

“[Rauner’s] math is fuzzy, his claims have been proven false and the only thing the governor’s action advances is his own personal brand of cynical politics,” Emanuel said. “It is well past time for Rauner to stop playing politics with our children’s futures, start demonstrating leadership and ensure a child’s education isn’t determined by their zip code or his political whims.”

However, Illinois republicans are allying themselves with the governor. In a joint statement, Senate republican Bill Brady and House republican Leader Jim Durkin said they support Rauner’s veto and will oppose efforts to override it.

“With the support of Democrat legislators whose schools fare better under the governor’s plan, we believe the amended SB1 should become law,” the GOP leaders said. “However, we remain open to compromise developed through real, productive negotiations designed to reach consensus.”

“I would encourage my legislative colleagues to support the governor’s action, or work together in good faith to pass a bipartisan compromise,” Rezin said in a public statement. “Either of which will give parents peace of mind and ensure all schools open time and remain open.”