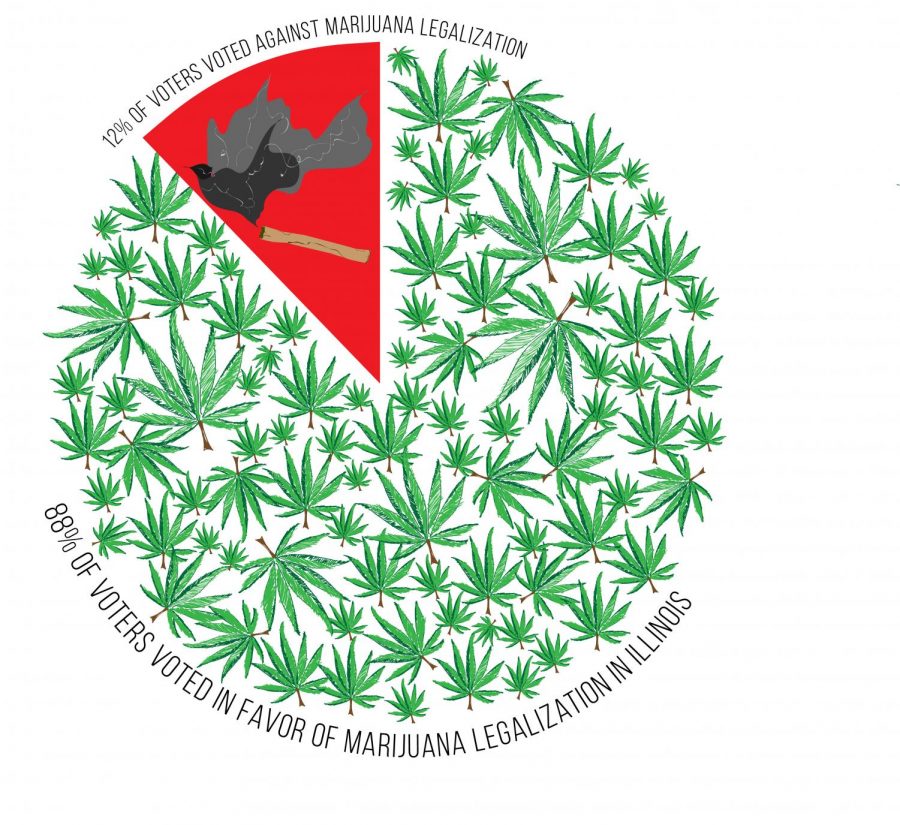 Before the midterm election, Governor-elect J.B. Pritzker campaigned on his support of marijuana legalization in Illinois, suggesting that this legislation could reduce opioid overdoses, help reform the criminal justice system and bring in nearly $700 billion in revenue.

While he has not specified what the revenue would support,

88 percent of Cook County voters said on their ballots Nov. 8 that it should be used to fund Chicago Public Schools and mental health services.

Pritzker told Fox32 News Nov. 7 that legalizing marijuana is something that can be worked on nearly right away. Pritzker has not provided a timeline for this legislation but has said he wants to consider legislation from other states.

“One of the advantages of not being one of the first states in the United States to do it is that we can look and see what worked in other states and bring the [ideas] that worked to Illinois,” he said.

Paul Armentano, deputy director of the National Organization for the Reform of Marijuana Laws, said Pritzker is not alone in having campaigned on a platform for the legalization and regulation of the adult use of marijuana.

“We know, through state-wide polling and national polling that a majority of the American electorate believe marijuana use, by adults, ought to be legal, it ought to be regulated and sales involving marijuana ought to be taxed,” Armentano said.

According to the Colorado Department of Revenue, the first $40 million of the state’s Retail Marijuana Excise Tax revenue in 2016 and 2017 was distributed to the Public School Capital Construction Assistance Fund administered by the state’s education department.

“I’m totally behind the [legal] marijuana movement,” Villagran said. “Dispensaries are going to start popping up. They are going to tax it anyway, so they might as well put that to good use.”

“Specifically in Illinois, a lot of high schools, CPS schools

primarily, are being shut down,” McNeil said. “If [Marijuana is] being legalized, and the funding is going [toward] CPS schools, that’s brilliant.”

Reavis Elementary Math & Science Specialty School teacher Kesha Parker said she has a limited amount of supplies allotted for each student because of funding.

“I am not in [agreement] with marijuana being legalized, but I am in [agreement] with anything that helps public schools,” Parker said. “If they hire more people to help inside the classroom that would be great. More supplies, books or extracurricular activities for the kids would be great. If that’s what they are going to use the funds for, then I am in agreement with that.”