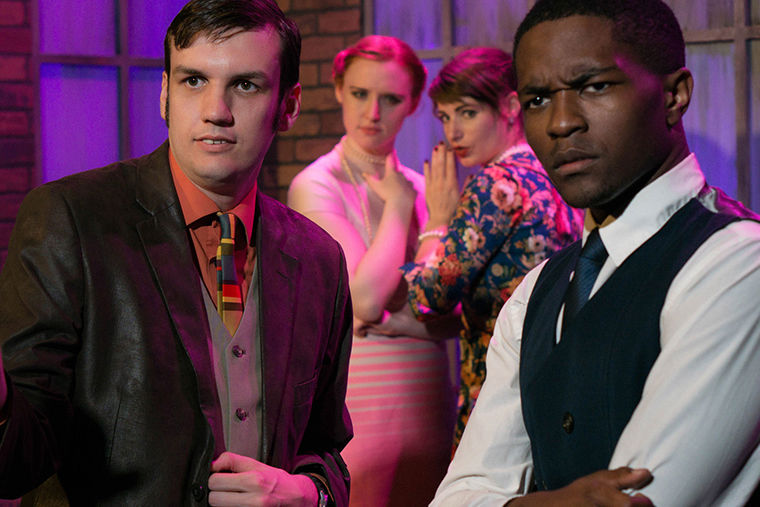 “Clued In: An Improvised Murder Mystery” is playing at The Blackout Cabaret on Thursdays April 5–May 31, then moving to Judy’s Beat Lounge Saturday’s June 2–30, both at 230 W. North Ave.

In a dimly-lit cabaret, a detective interrogates individuals, hoping to solve a murder in “Clued In: An Improvised Murder Mystery,” an audience participation-themed entertainment.

Performing at The Blackout Cabaret on Thursdays April 5–May 31 and moving to Judy’s Beat Lounge Saturday’s from June 2–30, both at 230 W. North Ave., “Clued In: An Improvised Murder Mystery” will be making a return to the stage.

Inspired by Agatha Christie’s mystery novels, the play allows the audience to choose at the beginning of each show which of the six rotating characters will play the detective. The detective has to solve the murder using clues from the other members, according to C.J. Tuor, creator of the show.

The show’s outcome differs each performance based on the suggested setting and detective chosen by audience members, he added.

Since the show’s launch in January 2016, the group has added cast members and adjusted the show so it can feel more like a novel, Tuor said.

“The show [was] created to challenge improvisers, so we threw a few more obstacles in front of us,” Tuor said. “The idea [is] reining in the chaos each week to create an ending the audience finds engaging and intelligent.”

Many of the cast members were pulled from the ongoing show “Hitch*Cocktails,” a thriller improvised show in the style of Alfred Hitchcock, which was awarded Best Improv Troupe of 2016 by the Chicago Reader.

Although there are more cast members added into the production, Madelyn Murphy, a founding ensemble member, said creating a gender-balanced cast for this show was a priority.

“Three men, three women. There is simply no reason to not have it be balanced,” Murphy said. “The cool thing about that is you are not only going to see a variety of characters but very strong women and men all paired equally.”

Murphy said the show appeals to viewers because it asks the audience to solve a mystery, collaborating to create an incredible story. The costumes and production values strike a similar note, he said.

Bruce Phillips, an actor in “Clued In” and executive director for High Stakes Production, the show’s producer, said the show is similar to “Hitch*Cocktails,” but “Clued In” has different challenges.

Hungry for different challenges as an improviser, Tuor said the show is the perfect opportunity to test improvisers’ skills by building a narrative based on the clues given.

“The thing we like about narrative improv is that you are telling a story,” Tuor said. “It isn’t about being visual. It is about people coming together and telling a narrative.”