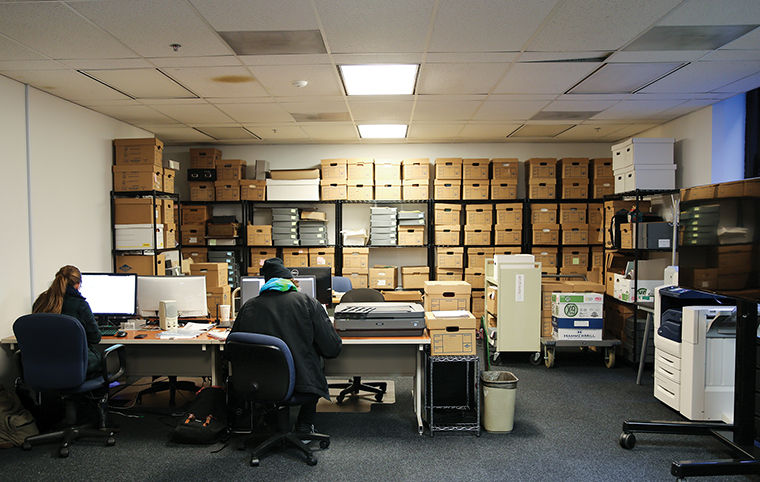 The main office of the college archives on the 4th floor of the 600 S. Michigan Ave. building holds documents relating to Columbia’s history. This is one of eight on-campus spaces that houses these archival materials in addition to one off-site storage unit.

To better organize and consolidate the college’s archives, Columbia’s administration is planning to create new campus spaces to house college records, which are currently not stored under recommended archival conditions.

Presently there are eight storage spaces for the archives scattered around campus, in the 600, 618 and 624 S. Michigan Ave. buildings, the 619 S. Wabash Ave. building and one off-site storage unit.

Academic archives include documents such as by-laws, board of trustee decisions, presidential records and financial and admissions records.

Because the existing college archives are spread across campus the storage spaces are not environmentally different form any other space in those buildings. Since these spaces span the campus,  there is a need for consolidation, said Heidi Marshall head of Columbia’s archives.

Alicia Berg, vice president of Campus Environment, said she has been working with Stan Wearden, senior vice president and provost, to find a centralized space for the college archives. Berg said if the administration establishes this as a priority, her office is prepared to help.

Although there are no definitive plans to move the archives yet, the college is starting to have conversations about a solution to the storage problem, Berg said.

“In the meantime, if there is something that is of concern to the college, we’re always happy to try to look for space solutions that move things in the right direction,” Berg said.

Christina Zamon, head of Archives and Special Collections at Emerson College, said that it is important for an institution to maintain its archives. The archives are important for the institution but also for external researchers, she said.

“The archives serve as an institutional memory for the entire institution,” Zamon said. “Without the archives, you don’t have that kind of core and basic information to feed back to the community.”

The majority of documents are kept in their original paper form because it is much more cost-effective, according to Zamon. Easily accessible materials are an exception, such as yearbooks and college newspapers are frequently digitized as well, she said.

“It’s much cheaper to keep them  in their original paper form than it is to digitally reformat everything,” Zamon said. “It’s not practical to make [everything] digital. You have to pick your battles wisely.”

Because most records are not digitized, it is important to ensure they stay intact, Zamon said. Ideal archival spaces have climate and light control systems. Archival space also has to be appropriately protected by fire systems to ensure materials will not be damaged, Zamon said.

“You are keeping essentially a treasure trove,” Zamon said. “You don’t want to just throw it in a room or a basement—which is unfortunately what happens a lot of the time—where the material is going to be constantly under threat by any number of environmental conditions.”

Columbia began collecting archives in 2005 after hiring Marshall. Before she arrived, the college librarians collected most of the archives, Marshall said.

The college archives include institutional records and also work from people such as William Russo, who founded the Music Department, as well as political cartoonist John Fischetti, whose family foundation finances an annual contest in political cartoonists.

“A lot of this material is available and collected to show students what primary resources look like or how creativity can be seen through material and to learn something from the people who worked in the profession in which our students are being taught the discipline of,” Marshall said.

Marshall said the archivists need a way to keep records centralized so they can get rid of duplicates, have a space where all of their collected material can be together and have a place for visitors. She said taking care of the archives can not only provide for the future but also show the history of the college.

“You can’t actually understand where you’re going unless you know where you’ve come from, and I think that’s the role of archive,” Marshall said.