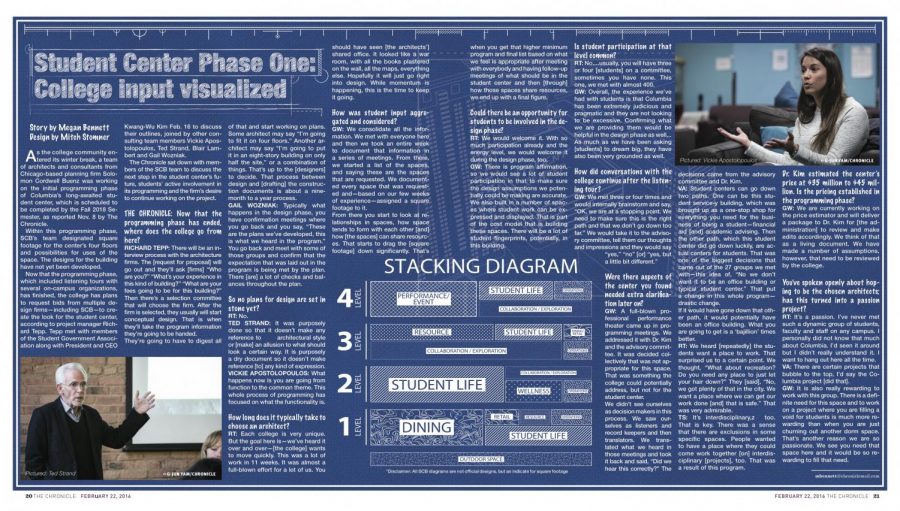 As the college community entered its winter break, a team of architects and consultants from Chicago-based planning firm Solomon Cordwell Buenz was working on the initial programming phase of Columbia’s long-awaited student center, which is scheduled to be completed by the Fall 2018 Semester, as reported Nov. 8 by The Chronicle.

Within this programming phase, SCB’s team designated square footage for the center’s four floors and possibilities for uses of the space. The designs for the building have not yet been developed.

Now that the programming phase, which included listening tours with several on-campus organizations, has finished, the college has plans to request bids from multiple design firms—including SCB—to create the look for the student center, according to project manager Richard Tepp. Tepp met with members of the Student Government Association along with President and CEO Kwang-Wu Kim Feb. 16 to discuss their outlines, joined by other consulting team members Vickie Apostolopoulos, Ted Strand, Blair Lambert and Gail Wozniak.

The Chronicle sat down with members of the SCB team to discuss the next step in the student center’s future, students’ active involvement in its programming and the firm’s desire to continue working on the project.

THE CHRONICLE: Now that the programming phase has ended, where does the college go from here?

RICHARD TEPP: There will be an interview process with the architecture firms. The [request for proposal] will go out and they’ll ask [firms] “Who are you?” “What’s your experience in this kind of building?” “What are your fees going to be for this building?” Then there’s a selection committee that will choose the firm. After the firm is selected, they usually will start conceptual design. That is when they’ll take the program information they’re going to be handed.

They’re going to have to digest all of that and start working on plans. Some architect may say “I’m going to fit it on four floors.” Another architect may say “I’m going to put it in an eight-story building on only half the site,” or a combination of things. That’s up to the [designers] to decide. That process between design and [drafting] the construction documents is about a nine-month to a year process.

GAIL WOZNIAK: Typically what happens in the design phase, you have confirmation meetings where you go back and you say, “These are the plans we’ve developed, this is what we heard in the program.” You go back and meet with some of those groups and confirm that the expectation that was laid out in the program is being met by the plan. There [are] a lot of checks and balances throughout the plan.

So no plans for design are set in stone yet?

Vickie Apostolopoulos: What happens now is you are going from function to the common theme. This whole process of programming has focused on what the functionality is.

How long does it typically take to choose an architect?

RT: Each college is very unique. But the goal here is—we’ve heard it over and over—[the college] wants to move quickly. This was a lot of work in 11 weeks. It was almost a full-blown effort for a lot of us. You should have seen [the architects’] shared office. It looked like a war room, with all the books plastered on the wall, all the maps, everything else. Hopefully it will just go right into design. While momentum is happening, this is the time to keep it going.

How was student input aggregated and considered?

GW: We consolidate all the information. We met with everyone here and then we took an entire week to document that information in a series of meetings. From there, we started a list of the spaces, and saying these are the spaces that are requested. We documented every space that was requested and—based on our few weeks of experience—assigned a square footage to it.

From there you start to look at relationships in spaces, how space tends to form with each other [and] how [the spaces] can share resources. That starts to drag the [square footage] down significantly. That’s when you get that higher minimum program and final list based on what we feel is appropriate after meeting with everybody and having follow-up meetings of what should be in the student center and then [through] how those spaces share resources, we end up with a final figure.

Could there be an opportunity for students to be involved in the design phase?

GW: There is program affirmation, so we would see a lot of student participation in that to make sure the design assumptions we potentially could be making are accurate. We also built in a number of spaces where student work can be expressed and displayed. That is part of the cost model that is building these spaces. There will be a lot of student fingerprints, potentially, in this building.

Is student participation at that level common?

RT: No….usually, you will have three or four [students] on a committee, sometimes you have none. This one, we met with almost 400.

GW: Overall, the experience we’ve had with students is that Columbia has been extremely judicious and pragmatic and they are not looking to be excessive. Confirming what we are providing them would be helpful in the design phase as well…As much as we have been asking [students] to dream big, they have also been very grounded as well.

How did conversations with the college continue after the listening tour?

GW: We met three or four times and would internally brainstorm and say, “OK, we are at a stopping point. We need to make sure this is the right path and that we don’t go down too far.” We would take it to the advisory committee, tell them our thoughts and impressions and they would say “yes,” “no” [or] “yes, but a little bit different.”

Were there aspects of the center you found needed extra clarification later on?

GW: A full-blown professional performance theater came up in programming meetings. We addressed it with Dr. Kim and the advisory committee. It was decided collectively that was not appropriate for this space. That was something the college could potentially address, but not for the student center.

We didn’t see ourselves as decision makers in this process. We saw ourselves as listeners and record keepers and then translators. We translated what we heard in those meetings and took it back and said, “Did we hear this correctly?” The decisions came from the advisory committee and Dr. Kim.

VA: Student centers can go down two paths. One can be this student service-y building, which was brought up as a one-stop shop for everything you need for the business of being a student—financial aid [and] academic advising. Then the other path, which this student center did go down luckily, are actual centers for students. That was one of the biggest decisions that came out of the 27 groups we met with—this idea of, “No we don’t want it to be an office building or typical student center.” That put a change in this whole program—drastic change.

If it would have gone down that other path, it would potentially have been an office building. What you are going to get is a ‘bajillion’ times better.

RT: We heard [repeatedly] the students want a place to work. That surprised us to a certain point. We thought, “What about recreation? Do you need any place to just let your hair down?” They [said], “No, we got plenty of that in the city. We want a place where we can get our work done [and] that is safe.” That was very admirable.

TS: It’s interdisciplinary, too. That is key. There was a sense that there are exclusions in some specific spaces. People wanted to have a place where they could come work together [on] interdisciplinary [projects], too. That was a result of this program.

Dr. Kim estimated the center’s price at $35 million to $45 million. Is the pricing established in the programming phase?

GW: We are currently working on the price estimator and will deliver a package to Dr. Kim for [the administration] to review and make edits accordingly. We think of that as a living document. We have made a number of assumptions, however, that need to be reviewed by the college.

You’ve spoken openly about hoping to be the chosen architects; has this turned into a passion project?

RT: It’s a passion. I’ve never met such a dynamic group of students, faculty and staff on any campus. I personally did not know that much about Columbia. I’d seen it around but I didn’t really understand it. I want to hang out here all the time.

VA: There are certain projects that bubble to the top, I’d say the Columbia project [did that].

GW: It is also really rewarding to work with this group. There is a definite need for this space and to work on a project where you are filling a void for students is much more rewarding than when you are just churning out another dorm space. That’s another reason we are so passionate. We see you need that space here and it would be so rewarding to fill that need.