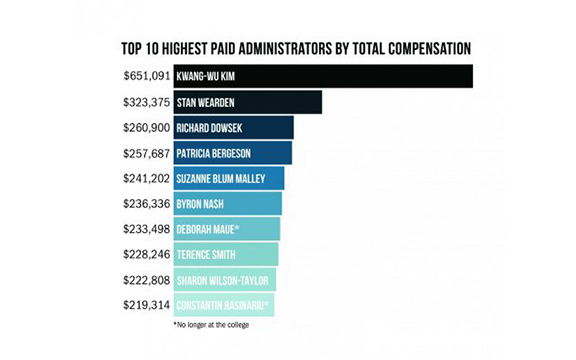 By Ariana Portalatin and Blaise Mesa

Columbia revenue was on the rise in the 2016 reporting year, but so were the college’s personnel costs.

Columbia reported higher revenue and net assets for its 2016-2017 fiscal year, according to recently-released IRS 990 tax forms, but the gains came with a decrease in contributions and grants and bigger payments for administrative compensation.

The 990 tax forms, an annual document completed by nonprofit organizations and institutions, are released to the public 18 months after they are filed. The forms were released in November and contain information from the 2016–2017 fiscal year, such as contributions and grants, total revenue, assets and administrative compensation.

The drop represents a 17 percent decrease from the $6.8 million the college received the prior year.

David Bea, principal and manager at Bea and Vandenberk Law Office and expert in nonprofit tax law, said contribution gaps are not uncommon after turnover in the development department.

“You are always having to renew your donor base,” Bea said.

Vice President of Development and Alumni Relations Shawn Wax joined Columbia in 2017 and was not at the college during the decrease in contributions and grants. He said fundraising numbers will decrease the following year as well.

Wax said the report on contributions and grants will be bleaker next fiscal year because the programs he has put into place will not yield results for several years.

Wax said asking for donations from specific departments has been successful. In the past year—not yet reported to the IRS—his fundraisers got contributions and grants back to approximately $6 million.

“There was no one here to see folks,” Wax said. “Now we have a full staff and a full team, and every time we go see people and have a conversation about Columbia, the response is overwhelmingly positive and people are making donations.”

Wax made it a goal for fundraisers who find potential donors to make 14 face-to-face meetings or visits every month.

Wax would also like to try to include students in the fundraising initiative but does not yet know how he could do that. He said his previous work at the University of Illinois and the University of Iowa was successful, and he is eager to explore similar ideas at Columbia.

Senior Vice President for Business Affairs and CFO Jerry Tarrer said the substantial increase in other revenue was mostly from the sale of the University Center. Tarrer also attributed the increase in assets to growth in investments.

Bea interpreted the asset report as a positive sign. “If you look at the assets, things look healthy,” he said. “The managers are doing a good job.”

The college reported an increase in assets and net income and a decrease in liabilities and expenses.

“We did what we could to contain costs,” Tarrer said. “There’s always conversations about how we’re spending the money and if there are opportunities to more wisely use those resources.”

“The [investment] market was kind to a lot of institutions, and a lot of higher education institutions saw their endowments improve that year,” Tarrer said.

The Board of Trustees decided 95.46 percent of the funds were board-designated, meaning the funds would be put toward the endowment fund.

The college also listed investments of $51,462,000 on its Statement of Activities outside the US (schedule F). The investments are not listed on the 2015 form. Associate Vice President and Controller Matt Jaehrling said the difference can possibly be attributed to reporting requirement changes by the IRS that required the college to break down investments differently.

“They’ll make decisions as to where to plop that funding,” he said. “It depends on who the fund manager is that we’re hiring and where they’re actually investing our dollars that sit in our endowment.”

Correction 12/10/18 at 1:10 p.m.: Constantin Rasinariu’s name was misspelled in a previous version of this article. The Chronicle regrets this error.