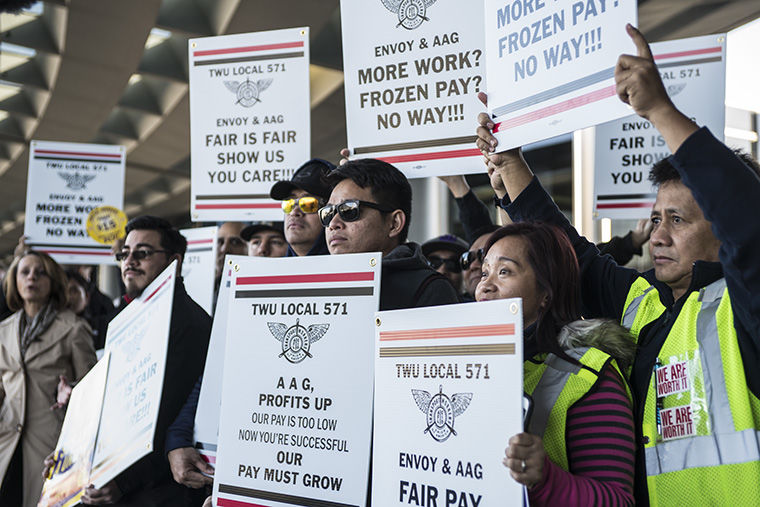 Airport employees and other minimum wage workers gathered outside of O’Hare International Airport Nov. 29 to fight for a $15 minimum wage.

A peaceful crowd of airport workers and supporters gathered outside O’Hare International Airport Nov. 29, carrying signs demanding a $15 minimum wage and union rights as a part of Fight for 15.

Nov. 29 marked the fourth year of Fight for 15, a nationwide movement in which fast food employees, Uber drivers and other minimum wage workers hold protests calling for a $15 minimum wage and additional benefits.

“The wages we make in these companies are not worth the sweat, blood and tears that we provide,” said Oliwia Pac, a 24-year-old O’Hare employee whose job includes security services, caring for unaccompanied minors and wheelchair service.

Pac said O’Hare workers decided to strike for a $15 minimum wage, union rights and benefits after management refused to meet with them about those issues.

“They just don’t want to listen,” Pac said. “I’ve had my wages stolen; I’ve been injured on the job—getting sick is very easy here as well—and they didn’t want to do anything about it, so all the workers here at the airport chose to come together and go on strike to make sure our voices are heard.”

“Who can live off $8.25? $10.50 is better, but the $15 will help a lot of the people, [especially those] who are single parents,” Simmons said. “I’m a single parent; I have a kid at home, and it’s hard to take care of her and pay the rent and do everything that she needs done. Kids cost a lot of money, so it’s worth [fighting] for more because we work hard for everything we do and we just want pay that equals.”

Kisha Rivera, a cabin cleaner at O’Hare, said she is concerned  about the treatment of the employees at the international airport as well as the low minimum wage and expressed concern that some minimum wage workers  still need government benefits to get by.

“Why live on welfare, why live on the system, when you have a 40-hour job?” Rivera said. “It’s just not right.”

While the U.S. is one of the most wealthy countries in the world, 51 percent of the country earns under $30,000 a year, according to Steven Ashby, a 61-year-old professor of labor studies at the University of Illinois who came to O’Hare to stand in solidarity with the protesting workers from different areas throughout Chicago. Ashby added that every other wealthy country has a minimum wage 50-100 percent greater than the U.S.

“We have so much pride in America for good reason, but not in how we treat our workers,” Ashby said.

In the U.S., 29 states have a higher minimum wage than the current federal mandate, according to Ashby, and several state referendums passed raising the minimum wage.

“[Labor activists and organized workers] have already accomplished a tremendous amount in city after city,” he said.