20 years of Chicago Blue Men: The art of chaos, inconsistency 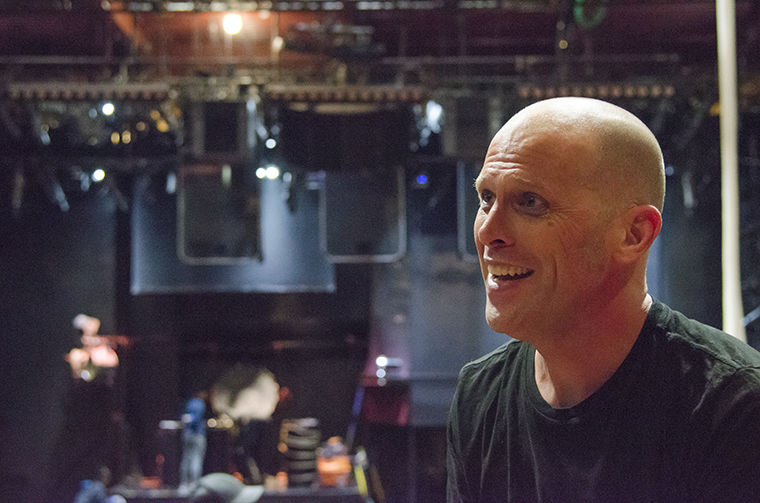 Blue Man Group has been running in Chicago for 20 years now. That’s a lot of paint splashed during drum solos, replacement drum heads, marshmallows and Jell-O.

But beneath every Blue Man is a real-life person munching on Cap’n Crunch, pounding on PVC pipes and spitting paint everywhere.

As part of Blue Man Group’s 20th Chicago anniversary, the production invited The Chronicle to see its Oct. 5 show and chat with some of the people behind two decades of madness.

The show, with its oddball humor and mysteriously intimidating leading men, is nothing short of bizarre—but that’s the point, according to 18-year veteran Blue Man Eric Gebow.

“Whatever [the meaning] is, we try not to define what we want people to walk away from the show with,” said Gebow, who has played a Blue Man everywhere from New York City to Tokyo throughout his career.

The performance includes scientific information on how eyeballs work, cautionary animations of cellphone users getting hit by cars and a sort of rock concert dance move routine. The only consistent thing about it is inconsistency.

“One of the cool things is that people get so many different things out of it,” said Jeff Quay, music director, who has been with the Chicago Blue Man Group since its inception. “It’s kind of cool because we know the show on that more intimate level—all those layers—so it’s really interesting when someone can tap into that. But it’s just as valid when someone [simply] has a great time.”

As Quay spoke, Gebow’s two fellow Blue Men—still completely in character—poked their heads in to observe the question and answer session. They waved sheepishly and wordlessly from behind a curtain before retreating backstage.

Lucky—or unlucky, depending on an individual’s opinion—audience members are even tapped to participate at points. The three Blue Men may invite a guest to a candlelit Twinkie dinner, or strap them in a jumpsuit, paint them and slam them into a wall to create a morbidly comical surrealist art piece.

But not all audience members are so accommodating. One woman at the Oct. 5 show refused to join the performers for the romantic dinner. Moments like that call for some on-the-fly thinking from the band and the Blue Men.

“That’s when we’re tested,” Quay said. “All bets are off. We can let go of the script for a moment because we have to deal.”

Quay, who also played drums for the performance, had the band stay in a perpetual swell while Gebow and his fellow performers hurried to find another dinner date.

“We had that moment when we had to bail on that and start over,” Gebow recalled. “That whole relationship there is a very sort of living thing between us and the band. Tonight was a really good example of how we just had to wait it out a little bit.”

Every individual show plays out a bit differently, but every group of performers—whether it be in Chicago, Las Vegas or Boston—switches things up from how Blue Man Group’s founding trio did. However, they try not to infringe on the original vision too much, said stage manager Jenn Kincaid, who has been with the group since 2012.

“There’s constant note sessions that happen after every show,” Kincaid said after Gebow noted that new performers will sometimes take bits too far. “From our perspective of things, it’s really hard to come in and to learn the language of the company, and [work with] the guys who have been here for a really long time and know it way better than you do.”

The Blue Man Group is throwing a proper 20th anniversary party Oct. 12 with a special birthday performance, which will include “a few surprises” and free treats from Sprinkles Cupcakes after the show, according to an Oct. 3 press release.

“We want [viewers] to have some kind of meaningful experience,” Quay said. “For a lot of people it’s just being entertained and laughing and that’s cool.”