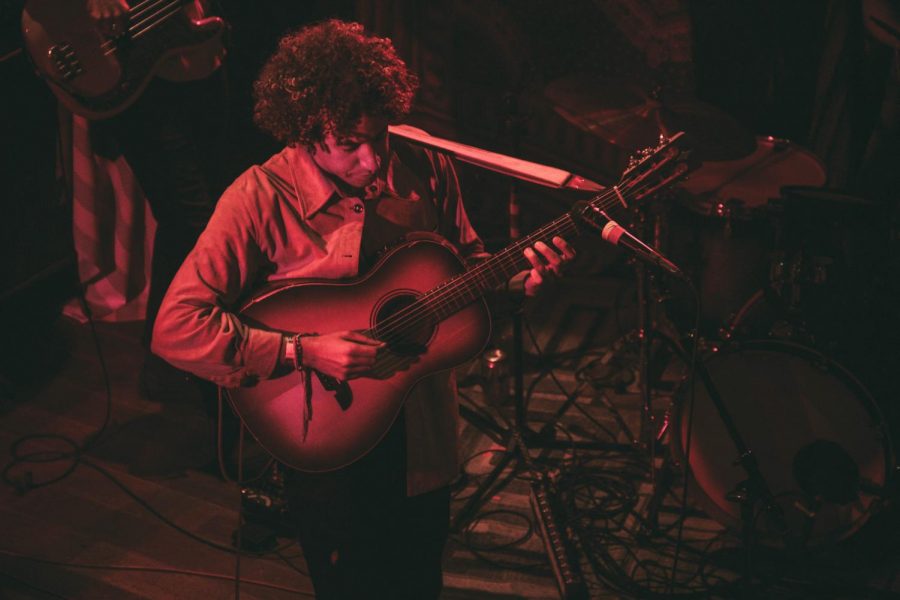 Lewis Del Mar had fans waiting outside the venue for three hours for its packed Oct 13 show at Lincoln Hall, 2424 N. Lincoln Ave.

It’s like the start of a love story: Danny Miller and Max Harwood met in elementary school when they were nine years old. They started playing in school bands and then graduated to basements at age 12, doing covers of Rage Against the Machine songs.

More than 20 years later, the duo is still glued at the hip under the moniker Lewis Del Mar, calling their musical relationship more like a marriage than anything else.

The Queens, New York duo caught the music waves with their 2015 EP Loud(y), which reached No. 7 in Billboard’s Emerging Artists chart. After working independently for over a decade, the folk and Latin-infused electronic duo signed with Startime International under Columbia Records and released their self-titled debut album Oct. 7.

Lewis Del Mar also performed at Lollapalooza 2016, playing on the same stage as Future, Radiohead and Mac Miller. The band is traveling across the country on its first headlining tour and played at Lincoln Hall, 2424 N. Lincoln Ave., Oct. 13.

The Chronicle spoke with Miller and Harwood about their debut album, being on a label and what drives their sound.

THE CHRONICLE: What music influenced you growing up?

Danny Miller: My father is Nicaraguan, so I grew up in a multicultural household, listening to salsa and samba and music from the Caribbean. When Max and I started playing, I was listening to more punk and ska and stuff that was more underground and scratchy. We are mainly influenced by stuff that isn’t musical. We both studied literature in college so a lot of authors from different periods of time but specifically  Latin America and their storytelling styles like Jorge Luis Borges and Gabriel Garcia Marquez [are influences]. Matisse comes up when we talk about inspiration—the way he has cut and pasted visuals both speaks to working with limitations and the collage of ideas that we try to combine.

Max Harwood: We tried to make our sound a hybrid of all the places we were influenced by, which was New York City, Rockaway Beach [in Queens] and Latin America. If you really think about those places and listen to our album, sonically and contextually it makes a lot of sense. There’s a lot of grit and openness of the ocean and rhythms from Latin America.

What do you each bring to the band?

DM: It is very multifaceted because we both bring different things to the band but in a very simple sense, Max is the producer and I am the songwriter. But, when you get on the road and you’re touring, it is a big balance of personalities. Max brings a lot of lighthearted, positive energy to the group and I bring more focus and organization. We are able to lead a group of people with those two different balances.

MH: That speaks even to the creative process. Dan is very detailed and specific about recording, and I am very big-pictured and see arrangements as a whole and understand songs emotionally as one piece.

What musicians—either alive or dead—would you want to work with and why?

DM: A lot of what Max and I do is so percussive and rhythmic and somebody who I listen to a lot is Stevie Wonder. The idea of using instruments that aren’t typically rhythmic in a rhythmic manner is very cool. Topaz Jones is an artist I would really like to work with.

MH: I would love to work with J Dilla, an iconic, legendary hip-hop producer. He brings together collages of sounds and it’s a big influence on me as a producer. That would have to be in a parallel universe.

How long did it take you to make the album?

DM: It really speaks to all of Max and me’s life experiences from all different age ranges but the actual recording process was about two years.

MH: Once we found what we wanted to say and this collage of sound, it was not that hard. We did take a really cool trip to finish the writing process. We went down to Cartagena, Colombia and rented a little apartment and recorded and drank lots of coffee and beer for about a week straight.

Why did you decide to join a label?

MH: We were independent artists for 10 years and drove around in my mom’s Volvo playing in club and bars. Once we put out these recordings there was a sense of the next level. You can’t just do the same thing forever. But at the end of the day, people just want good music and are always going to be judged more by their music than by anything else.