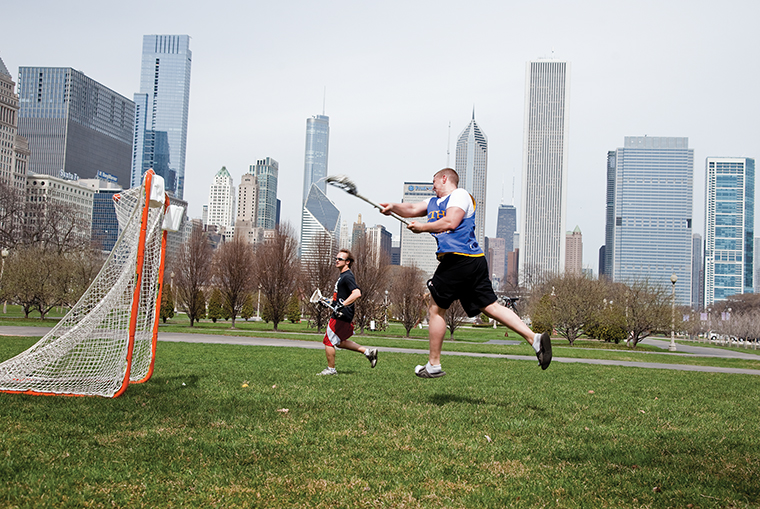 Players on the 2010 Renegades lacrosse team practice in Grant Park The Renegades are trying to revive the now-defunct lacrosse club, holding interest meetings Feb. 19 and 22.

Almost 10 years ago, the Columbia Renegades had an active, competitive lacrosse team that played in a club league against schools such as Northwestern, DePaul, Northern Illinois universities and the universities of Illinois and Indiana.

Although the team faded out in past years, there are currently efforts to revive Renegades lacrosse, according to Jon Bowman, president of the Renegades and a senior creative writing major.

“The interest meetings in the fall were kind of toward the end of the semester when people were hunkering down for finals, so we didn’t get the biggest turnout, but the people that did show up seemed pretty dedicated,” Bowman said. “We’re hoping that with these interest meetings coming up in February that we’ll get people.”

According to Mark Brticevich, fitness coordinator and dean of students, a former Renegades lacrosse team was active in 2006 and 2007, but when the leaders of the team graduated, there was no one left to take charge.

“It never seemed to pick up after that,” Brticevich said. “Even when we had a couple students that were willing to be leaders, there weren’t enough players. Then we had enough players but there were no leaders.”

According to Abby Cress, former Renegades president and a senior fashion design major, a student named Sarah Kotnik and a group of girls tried to start a team in the Spring 2012 but could not follow through because there was a lack of student interest.

“She was a great captain and she never gave up, but [there] was a lack of interest,” Cress said. “I think it’s more possible for men’s lacrosse to get started…. We even discussed the possibility of co-ed so that they’d have enough, but with lacrosse that’s not really a co-ed [sport] be- cause they play so differently.”

Cress said she thinks the Renegades would have better luck if they started fresh in the fall.

“If we could have interest meetings in spring … and then in the fall if they hold tryouts … then we’ll get a lot of the new students interested,”Cress said. “In the fall, that’s when everyone [wants] to get involved, I think it’s really important to get it kicked off in the fall.”

Brticevich said there were enough interested students to start a team in the past, but they did not commit to play on the team.

Bowman and Brticevich both said the new lacrosse team captain, Michael Kutsick, a freshman arts, entertainment & media management major, is dedicated, which could mean that based on past experiences, his only obstacle will be recruiting enough students.