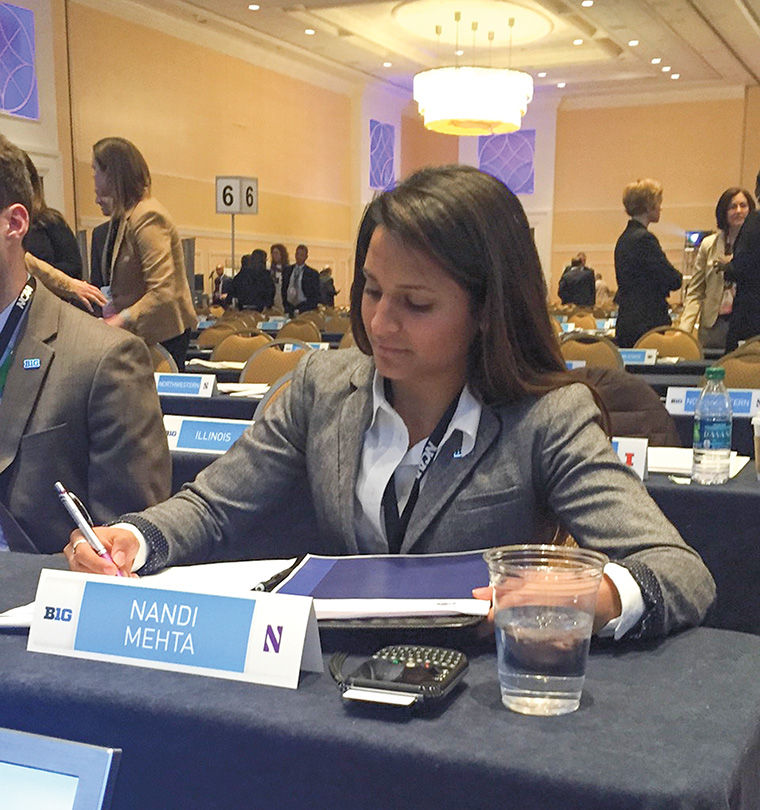 The Big Ten Conference announced Jan. 13 that Northwestern University student athlete Nandi Mehta will be one of three representatives for the NCAA’s new Division I autonomy governance structure.

Mehta, a Lexington, Massachusetts, native whose sport is soccer, will be joined by Purdue senior and golfer Ben-Marvin Egel and former University of Minnesota football player Chris Hawthorne.

“The governance structure was history in the making, and to be actively involved in it was amazing,” Mehta said. “We each come from different backgrounds, [and] different schools and our different options were all amazing.”

All three representatives will serve on the NCAA’s new autonomy governance structure enacted Aug. 7 to offer a wider range of self-government to members of the Big Ten, Big 12, Pac-12, Atlantic Coast and Southern conferences.

Mehta said she can see a lot of changes coming for student athletes in the coming years. She said she strives to be a catalyst for change in the Big 5 Conferences and, ultimately, the entire NCAA.

Mehta is not short on experience. The junior was co-captain of the Wildcats women’s soccer team in 2014, is co-president of the Northwestern Student-Athlete Advisory Committee, is a two-time Academic All-Big-Ten honoree and was selected as a Big Ten Distinguished Scholar, according to the Northwestern Wildcats website.

“I have been blessed to have a really great experience at Northwestern and to be a part of the Big Ten conference as well,” Mehta said. “I want to be able to represent all the athletes in the Big Ten Conference, and I think I can do it.”

Hawthorne said the goals of the autonomy structure are to provide student athletes with better opportunities, funding and programs on their respective campuses.

“I think it is the most important thing we can and should always be doing,” Hawthorne said. “If you look at the mission statements of every conference of NCAA, it says we are here to serve student athletes and be here for student athletes.”

The conference represents approximately 9,500 student athletes: to empower them by strengthening their voices and giving them a vote within a transparent decision-making process, according to The Big Ten Conference website. “To be quite frank and blunt, this has been a long time coming and something that probably should have been done a long time ago,” Hawthorne said. “It shows the current atmosphere around college athletics. You can have all the money you want and all the resources you want, but if you ultimately aren’t providing the health and safety and well-being [for] student athletes, then you’re not doing your job.”

Having a voice and voting within the Big Ten structure is important because it makes a difference to participating athletes, Egel said.

“The student athlete is the reason the NCAA exists,” Egel said. “This is a big step for student athletes to have a voice. It is an honor to represent the Big Ten.”

A Big 5 conference was held on Jan. 17 in the District of Columbia, where a group of 80 voting members from the ACC, Big 12, Big Ten, Pac-12 and SEC formally met. Student athletes and representatives were allowed to ask questions and speak openly.

Mehta, Hawthorne and Egel all attended the conference, and Mehta brought up a proposal that she said needed the most attention.