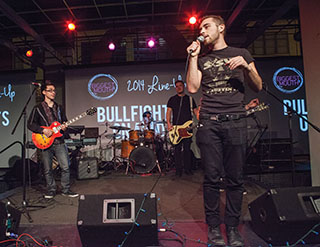 Ryan Argast, a junior arts, entertainment & media management major and lead vocalist of pop-rock band Marina City, may be the only Columbia student in the six-piece ensemble, but he makes sure the band is heard on campus.

Since the 2012 release of the band’s first EP, In The Wake of Dreaming, Marina City has steadily gained recognition. Argast, who writes the majority of the lyrics, qualified Marina City to play as the headliner at Columbia’s March 6 Big Mouth event.

But Marina City is not limited to playing on Columbia’s campus. After opening for local rock band The Action Blast and selling out the House of Blues, Marina City headlined at festivals such as Rockapalooza in Jackson, Mich., and Cosmic Invasion in Lexington, Ky. The band has opened for artists like Cartel, Go Radio and Amanda Palmer. Marina City performed several showcases at last year’s South by Southwest Festival and will return this year to collaborate with AEMMP Records, Columbia’s student-run record label, to promote its new album Chimera, which is set to drop April 22.

The Chronicle spoke to Argast about the new album, his solo career and his favorite performance.

THE CHRONICLE: Why did you title your new album Chimera?

Ryan Argast: Marina City is all about dreams. In two years, we’ve lost two members of the band, we’ve had our equipment stolen [and] we’ve had $1,400 stolen from us. As many success stories [as] we’ve had, we’ve had just as many downfalls. Chimera actually means “the dream killer” in Greek mythology and also means having an unrealistic goal of completing an awesome dream. It fits perfectly with all this drama we’ve had in the past two years.

CC: What will you be doing at SXSW?

RA: Because AEMMP is selling our record and promoting it, they thought it would be the best way to promote AEMMP and the band at SXSW. I’m super, super excited. Even though last year was kind of crazy, it was literally the best weather. Austin is super beautiful, and just the town and the atmosphere of everything is amazing.

CC: Have you ever thought about pursuing a solo career?

RA: I’ve been solo, and that’s the reason why I know all these guys in the band, because most of them were the backing band for my solo project. I was 17 and it was right before college. I was supposed to be the next Justin Bieber, but I wasn’t really into that kind of music. “Forever 17” was the big hit. The solo thing was fun. But at about 18 is when I decided I really liked collaborating with … my five best friends in the band and having that persona of Marina City.

CC: What has been your all-time favorite performance so far?

RA: One of my favorite shows was in Boston when there [were] probably like 20 people there and they didn’t really know who we were. The venue was super small. They were sitting down far away from us and I was like, ‘Hey, you should come hang out with us.’ But they wouldn’t really do it until they finally got into it, and they got into it so hard that it was literally the rowdiest show we ever played. It was just super cool to have 20 people connect with us so quickly when they looked like they hated us in the beginning.

CC: Where do you see yourself 10 years from now?

RA: Ten years from now I’ll be 31. I want to win Grammys [and] I want to be selling out huge venues. It would be awesome to do stadiums and stuff like that. I’m aiming high here, but you have to aim high, especially if you’re going to Columbia. You have to dream big, and that’s the big thing with Marina City is that we dream big, and if we don’t make those goals, at least we tried really hard and we found some place. If you reach for the stars, you fall on the clouds.