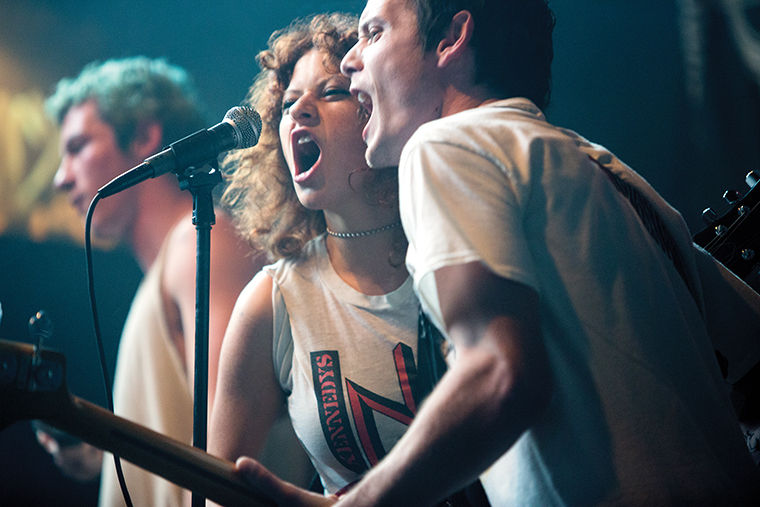 Director Jeremy Saulnier was inspired to direct “Green Room” by his experiences playing in a local punk band in high school.

Director Jeremy Saulnier spent his youth playing in punk rock bands and shooting no-budget zombie films with his friends on a Super 8 camcorder. His third feature film, “Green Room,” harkens back to those roots and is spattered with the blood of at least a few 1980s slasher flicks.

The refreshingly naturalistic camera work, dialogue and pacing briskly introduce the tightly knit group and their band-on-the-run lifestyle as they careen across Oregon in their sputtering van.

After an exhausting drive brings the downcast heroes to a show that pays $16 between the four of them, they lose their tempers with the reporter who set it up and violently demand another gig for their trouble. When their wish is granted, the film takes a new direction.

Until this point, “Green Room” plays like the lighthearted chronicle of a group of charmingly rebellious kids who probably think they’re tough—until their next show finds them thrust into a den of real-life, backwoods neo-Nazis.

From here, nail-biting tension, high-stakes terror and sudden bursts of brutality dominate. The once-rambunctious youths find themselves with their tails between their legs as they become increasingly entangled in the illicit dealings of an assortment of hard-boiled skinheads.

The highlight of this carnival of aggression is the venue’s owner, Darcy, a droll, elegant figure played with considerable starpower by Sir Patrick Stewart. Darcy’s calm, menacing demeanor is particularly effective juxtaposed with the quivering panic of the band as well as the atavistic mayhem of his henchmen.

Despite the heavy threat of violence that looms over the majority of “Green Room,” its atmosphere never becomes too oppressive, largely thanks to its tactfully placed comic relief. Much like punk rock itself, the film manages to feel biting, mean-spirited and fun all at the same time—even lighthearted at some moments. Moreover, the humor never feels cheeky or camp; it’s composed of the kind of subtle quips that real friends might make in a grim situation.

Fortunately, the rural hatemongers of “Green Room” are never depicted as campy pantomimes or paper cutout villains. As unpleasant as they are, they are three-dimensional characters rife with moral ambiguities. Regardless of how ugly or nasty they may be, they are possessed of an almost admirable loyalty to their brothers, not unlike the film’s central characters.

This realism is what makes the film so compelling. It may even strike a chord similar to John Boorman’s 1972 hit “Deliverance.” Being confronted by something that  manages to feel like both a lampoon and a frightening reality is especially meaningful at a time when rowdy crowds of voters are filling rock-‘n’-roll-sized stadiums to cheer for the racist rhetoric of a caricature like Donald Trump.

Darcy, addressing the patrons of his bar in the film’s third act asserts, “Remember, gentlemen. This is a movement, not a party,” yet bad behavior among this nation’s demagogues and a voter constituency driven by irrational sensationalism has brought a new level of meaning to the term “political party.” While “Green Room” is far from a political film, its nonsensationalist approach reminds us that these kinds of people are not the stuff of cheap horror films but an American reality.