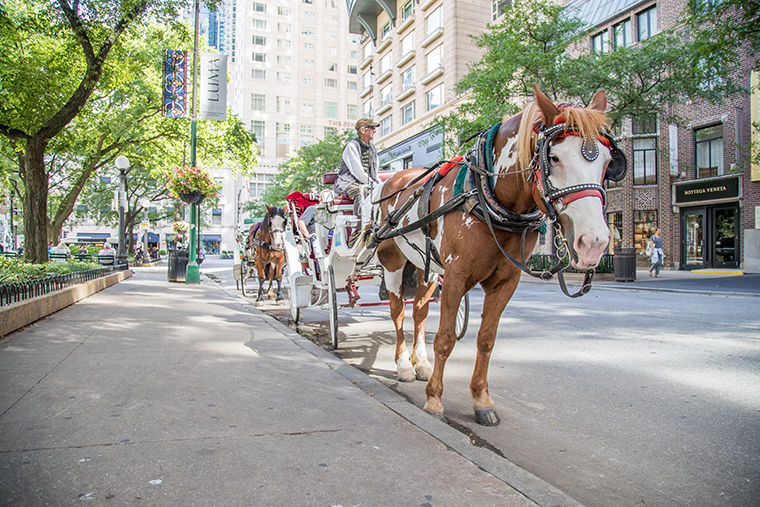 A long-standing tradition might be coming to the end of the road in Chicago, as animal-rights activists continue to protest horse-drawn carriages.

Several aldermen representing downtown support an ordinance proposed Dec. 13 by the Chicago Alliance for Animals to prohibit the renewal of carriage licenses in the city, effectively putting them out of business.

These aldermen did not respond to requests for comment as of press time.

Campaign Director of the Chicago Alliance for Animals Jodie Wiederkehr is one of the leading activists trying to ban the carriages and keep the companies accountable for violations.

“There are plenty of violations,” she said. “They are  not providing water, working when it’s 90 degrees or hotter. There are fines regarding hours of operation, overcrowding  and operational limits.”

Wiederkehr said she obtained a Freedom of Information Act response from the Business Affairs and Consumer Protection of the City Agency which monitors and enforces the laws and regulations for carriages, which stated there were 334 violations found in 2017.

Jim Rogers and Debbie Hay are two of three horse-drawn carriage owners filing a lawsuit in Cook County Circuit Court against a group of defendants, individually represented by Wiederkehr and Debby Rubenstein from the Chicago Alliance for Animals.

The complaint asserts that activists spread false information to  aldermen and other officials to persuade City Hall to pull their licenses and remove the carriages from the streets, according to Cook County records.

Rogers, owner of Great Lakes Horse and Carriage, said the violations Wiederkehr notes are the equivalent of a traffic ticket and that he does take care of his horses.

“We follow through with all of the animal welfare ordinances that are written into that,” Rogers said. “My horses are inspected quarterly by a licensed Illinois veterinarian, as required by city ordinances municipal code. They are also available for inspection by the city whenever they want to see them.”

Hay, owner of Antique Coach and Carriage, said she runs a legally-licensed operation, and horse-drawn carriages are a wholesome activity.

Carriage rides are historical and good for tourism, Hay added.

“I hope the sponsors of the proposed ban get tired of having the radical animal-rights activists, such as the Chicago Animal Alliance and the Humane Society of the United States, riding their backs to promote a radicalized animal-rights agenda,” Rogers said.

Wiederkehr wrote a statement on Facebook Sept. 18 in response to the suit, which said, “The horse carriage owners’ lawsuit is nothing but a baseless attempt to scare critics into silence …. The 334 violations and $20,000 in fines issued to Chicago’s horse carriage companies are real. That is why the owners sued us.”

Wiederkehr said she was concerned for the well-being of the horses and was skeptical of the veterinary services given to them.

“They are racking up this many violations and fines, and they are never following the law,” Wiederkehr said. “How do we know these horses are getting proper veterinary care or proper check ups? We don’t.”