Let’s get funky with whysowhite 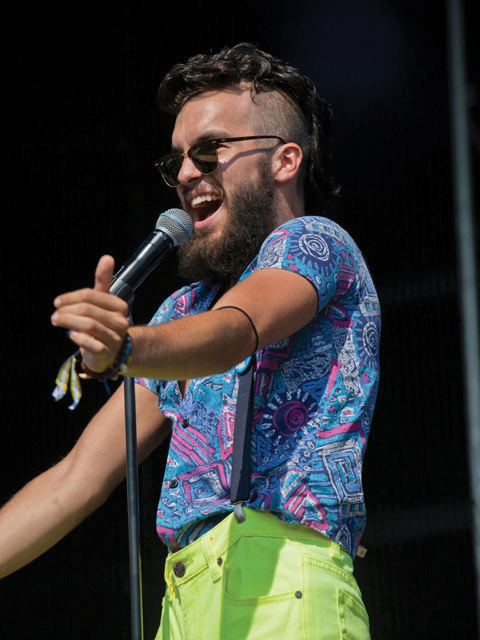 The six men of whysowhite strive to create the ultimate party experience at every show they play by shaking their hips, spitting sweet rhymes and inspiring audiences to “claim the boogie” and “get funky.”

For the past 6 1/2 years, with members coming and going, whysowhite has been carrying around funk, rap and positive vibes wherever it goes. Composed of “big fat” Nick McMillan on vocals and percussion; Charlie Moonbeam on vocals; Davis “d-pop fantastic” Haines on vocals, dance and congas; Chris “dngr” Miller on guitar; “suga” Sean “candy” Carolan as bassman; and Andrew “brahmz” Abramowitz on drums, whysowhite is bringing the funk.

Whysowhite’s members have a strong passion for music and a broad definition of funk, illustrated by the intensity and joy on their faces when they play. Their self-titled album, which dropped in February 2013, is available on bandcamp.com on a name-your-own-price basis and includes tracks such as the groovy “get busy” and the more serious, rap-heavy “exhale.” The band regularly gives the album away for free at shows in the spirit of bringing people together through music.

The Chronicle spoke with whysowhite over the phone about hip-hop, post-modernism, and keeping funk alive.

THE CHRONICLE: What is your secret to getting the crowd hyped up?

CHARLIE MOONBEAM: That’s funny because in a way that’s kind of our No. 1 aim, to just immediately connect with the crowd. We want to establish that relationship.

NICK MCMILLAN: I think we just address the crowd very honestly. We take away the whole “we’re at a concert” thing, or at least we try to make it like we’re all in this together.

CC: Why did you decide to start a funk band?

NM: I think it was more just like wanting to start a band. We didn’t find the funk; the funk found us. It was really just about getting people together to play music.

DAVIS HAINES: Funk is a broad term for us. We see it as a collection of what our family sounds like. Funk is what brought us together. We had a really cool opportunity to play with George Clinton in November. It was the day after Thanksgiving, and I call it the “Funk’s-Giving” because it really felt like one group of people coming together under a mission.

CMB: We all came together because we had the urge to make music. We found that group, which I believe is the definition of funk—a group—and we found that together.

CC: What was the inspiration behind fusing rap with funk?

CHRIS MILLER: Instrumental funk was heavily influential to the hip-hop community. I feel like hip-hop is where the seed of facilitating a party came from. It’s important to me to share with people the desire to get funky. That’s why hip-hop is so enigmatic.

CC: How did you come up with the name?

DH: The original inception of the name was an off-hand comment that I made. Batman had come out recently and so the buzz phrase was like “Why so serious?” and I was like “Why so anything? Why so white?” and it came out and instantly Nick was just like “That’s the name, that sounds good.” We just ran with it. Honestly, we’ve grown into our name more than we initially had a plan for.

NM: We started to meditate on the concept of “whiteness” in people’s lives and to us, “whiteness” seems to be the lack of color or a blank canvas. It’s about choosing to fly your freak flag and get funky.

CC: People might assume a band called whysowhite has a racial meaning.

DH: That’s kind of the great thing about it. It always starts a conversation. It provides us an opportunity to shift the perspective. White is a color. It means something different to different people, but to us it means a canvas on which we can paint.

NM: It’s about addressing a reality, too. The fact that in people’s heads, it’s representative of an inability to face that. It’s really about asking that question and seeing how it elicits a response. The name is in the reaction. The fact that someone thinks we’re saying something is the point. It’s blankness, but whatever you think we’re talking about is clearly what needs to be addressed.

CC: Do people ever think you’re joking when you get on stage?

DH: We kind of are. It’s kind of a big joke. We take our fun very seriously.

CC: So it’s kind of like a post-modern approach?

CC: Is there anything you want to add?