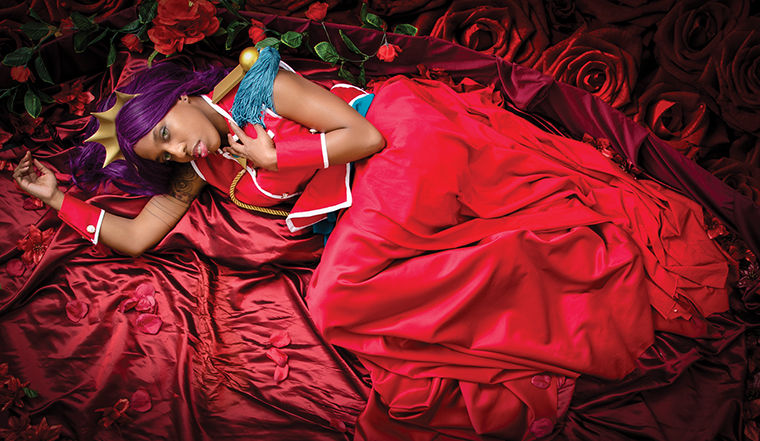 Victory is an avid cosplayer—someone who dresses up and acts like a fictional character. In preparation for the convention, she recreated Madoka, a popular character from Puella Magi Madoka Magica, an anime and manga series about a group of girls who battle witches.

Victory’s costume was well-received at the convention. Other cosplayers complimented her outfit, praising her ability to recreate the original character’s look. She garnered accolades for her costume’s hand-stitching and for her vibrant pink hairstyle with giant pink, silky ribbons.

Her photos as Madoka became some of her most popular on social media platforms, receiving praise similar to what she drew at the convention.

It was a nasty shock for Victory when her photo was posted to a website with a caption saying “n—-rs can’t do cosplay because of their dark skin tone and they ruin characters because of how they look.”

The website, which is managed by a young white man, continued to attract criticism of Victory’s portrayal. Madoka, like most anime and manga characters, is Asian, while Victory is black. The post revealed a silent truth about the racism in cosplay that stems from a group of people who believe ethnic portrayals of white characters ruin it. Dozens of people made comments about Victory’s race.

The revelation isn’t a new one but rather a recurring theme in the cosplay community.

“Every time I see something about myself, it’s never, ‘Her cosplays are bad’ or, ‘It’s poorly constructed,’” Victory said. “It’s always about my skin tone. ‘She’s too dark for that cosplay’ or, ‘It doesn’t look good on her because she’s black.’ It hurts my feelings. It’s rude and inconsiderate.”

Cosplay, a term derived from the words “costume” and “play,” is a common practice within fandom communities in which members dress as their favorite characters from an anime series, TV show, comic or video game and identify as that character. Cosplay is a way of expressing admiration for a character and having a good time with friends who have similar interests, Victory said.

Most commonly, cosplay is a staple at anime and fandom conventions, but people might also cosplay for other occasions, such as small group gatherings, club meetings and movie screenings.

“There are a lot of games, movies and music that [inspire me] and the fantasy of wanting to be those characters, [which] I am able to do in cosplay,” Victory said. “It’s a piece of art to me. It’s like an art form of you being someone else.”

Despite fellow cosplayers being united by similar interests and the hobby’s strong focus on creativity, the type of discrimination black cosplayers face for dressing as white characters is not uncommon. It happens online and in person at convention centers and other cosplay gatherings.

Andre Duval, a sophomore music major, started cosplaying in 2012 when he attended Anime Central, an annual anime convention held in Rosemont, Illinois, and learned very quickly that the community was not always supportive of black cosplayers.

“I was cosplaying Nightwing, who is [Batman’s] first Robin,” Duval said. “I heard all kinds of stuff walking from the convention center like, ‘Oh look, it’s Blackwing,’ or, ‘It’s N—-rwing!’”

Another issue black cosplayers face is watching white people do blackface to cosplay as black characters. One such incident caused a social media frenzy in October 2014 when a cosplayer in Germany went blackface in order to look like Michonne, a character from “The Walking Dead.”

Harry Crosland, a government systems analyst from Largo, Maryland, said he was initially offended when he saw the girl’s cosplay of Michonne, but after talking to her about why she did it, he understood she meant no harm.

“She didn’t know it was offensive [to do blackface] and she had a very huge love of the character as well, but the general idea for anybody is before you consider doing such a thing you have to know your audience and know the other people’s culture,” Crosland said.

Victory said it is important to put an end to discrimination against black cosplayers because there are a lot of black people interested in cosplay who are too afraid to participate because they do not want to be subjected to racial slurs or harassed for the cosplay characters they choose.

“We are very overshadowed, which is unfortunate, because of our skin tone,” Victory said. “A black cosplayer can do the exact same cosplay as a white cosplayer, but by the end of the day it’s always going to be the white cosplayer that gets more recognition.”

Additionally, black cosplayers struggle to seek visibility at convention centers. When they are not being criticized for cosplaying as characters of a different race, black cosplayers are often ignored for their costumes, and photographers and other convention attendees will pass them up on photo opportunities, Victory said.

“Photographers sometimes don’t work with people because of their race,” Victory said. “We get photographers saying they don’t want to work with [our] skin tone because it wouldn’t look good in their portfolios.”

Michael Wilson, a deputy sheriff at the Mahoning County Sheriff’s Office in Youngstown, Ohio, has been cosplaying for nearly four years. He said it is important to put an end to discrimination against black cosplayers because it can discourage black people with an interest in cosplay from participating in the hobby.

Wilson said he first became interested in cosplay in 2011 when he decided to make his own costume for Halloween. Wilson opted to be the John Stewart Green Lantern, who is a black representation of the Green Lantern.

To increase visibility of the black cosplay community and highlight some of the issues that black cosplayers deal with, Chaka Cumberbatch, known as Princess Mentality Cosplay by her peers, started #28DaysOfBlackCosplay, a movement throughout the month of February in which various black cosplayers were highlighted every day through Twitter and Facebook.

According to Crosland, who helped organize #28DaysOfBlackCosplay, the movement was created as a celebration of Black History Month and has received an overwhelming amount of support from the cosplay community.

“What we wanted to do with this movement was to show that there are people out there of color who cosplay as characters regardless of who or what they are,” Crosland said. “It’s really done a lot for people in the community.”

cosplayers in the community who are experiencing similar feelings and struggles, allowing them to meet each other.

“If one person happens to be scrolling through Twitter, sees the hashtag, clicks it and sees that [cosplay] is really cool and they can do it, too, then mission accomplished,” Wilson said.

Jessica Kennan, a sales associate at Victoria’s Secret who has been cosplaying for 14 years, said the #28DaysOfBlackCosplay movement is important because it can encourage black children from low-income families to participate in cosplay as a creative outlet that can serve as an alternative to getting involved in illegal activities.

“For myself, cosplay was a place for me to get away from the streets [where] there was drugs, prostitution and other things to get into,” Kennan said. “It’s something else to absorb yourself in when your neighborhood doesn’t have a playground because there’s drug dealers down the street.”

Teaching black children that they are allowed to participate in cosplay develops positive role models for them in the heroes they dress up as, rather than looking up to the negative influences that might be present in their neighborhoods, Kennan said.

#28DaysOfBlackCosplay is generally viewed as a positive movement within the black community, but Kennan said there has been a counter reaction in which some people don’t understand why a similar hashtag does not exist to celebrate white cosplayers.

“They feel that black cosplayers or black people are being sensitive and say, ‘Well, you don’t see us having a special day,’” Kennan said.

However, #28DaysOfBlackCosplay is important because black cosplayers go largely unnoticed, and the movement seeks to give black cosplayers more visibility so they can be incorporated into the cosplay community, according to Kennan.

“I’ve heard that it’s helped people’s kids to see blacks in a positive light because when you look at the media out there, you don’t have a lot of positive [portrayals] of black imagery,” Crosland said.

There are very few superheroes or characters in pop culture that are black, and showing that black people can cosplay as white heroes helps to increase the amount of positive portrayals of black people, Crosland said.

According to Joan Miller, a graduate student in performance theory at New York University’s Tisch School of Theater, black cosplaying can highlight issues of racial politics in media representation.

“Cosplay is one of the ways in which we can create a dialogue between media consumers and media producers,” Miller said. “[Black cosplay] is a way of generating media images that are generally not produced. It’s a good way to enter into dialogue and to show people who have the power and the means of production that these are the kinds of images we want to see and that we deserve representation.”

Jill Thompson, a comic book creator who has worked on many popular characters including Wonder Woman, said she sees nothing wrong when people of other races cosplay as her characters and is instead delighted that somebody would identify with her characters enough to dress as them.

Additionally, she said she would like to see more diverse characters of varying backgrounds and ethnicities portrayed in popular comics, but only if the diversity comes naturally and is not forced for the sake of seeming diverse.

“People tend to write what they know, and I would rather have things accurately portrayed,” Thompson said. “If they are just shoved in there and don’t really bring anything to the story, then no, I don’t want to see that.”

There is a shortage of black artists and writers in major comic companies such as Marvel and DC, Crosland said. Introducing a more diverse pool of superheroes and characters starts with hiring more diversity among their creators, he said.

“It’s not just people of color—it’s women, people from other cultures [and other backgrounds],” Crosland said. “Every group of minority people needs more representation because when you go to these conventions, you mostly have white male creators in there, and when you have young kids looking at their favorite superheroes, they get more attached when they see someone that looks something like them.”