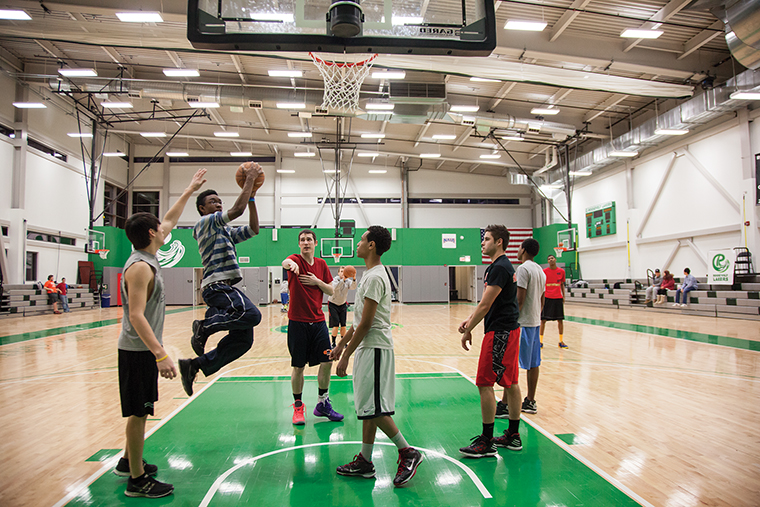 Roosevelt and Columbia students taking part in an open gym on Thursday, Feb. 6 after discussions for a 5-on-5 basketball tournament to take place this spring at Roosevelt University's Goodman Center.

The 5-on-5 league, which began Feb. 9, is open to both Columbia and Roosevelt University students and staff every Sunday from 5–11 p.m.

According to Joseph Phillips, Renegades basketball team coach and a 2007 Columbia journalism alumnus, this is the first time Columbia has had access to a 5-on-5 weekend league, which will serve as a recruiting tool for the team.

“It’s going to allow us to pick from a pool of players,” Phillips said. “It should help generate interest over a sustainable period of time, instead of us having to try out one time of the year. We’re using this league for that purpose.”

According to Jon Bowman, Columbia Renegades president and senior creative writing major, the Renegades basketball team struggled to get off the ground during the fall 2013 semester.

“What happened with the Renegades basketball team is that there was a bit of a transition trying to find leadership and that kind of fell through, so the team kind of folded over,” Bowman said. “[The league] relates to the Renegades because it gives the players that are still there but weren’t able to be captains of the basketball team an opportunity to keep playing.”

The deadline to register for the Sunday league was Feb. 5, and a captain’s meeting was held Feb. 7 to clarify details of the league. Thirteen teams registered for the league, though there are students who registered without teams who may be grouped together.

There will be two games per team every Sunday, each lasting for 30 minutes—or until a team scores 35 points—with a running clock except for the last minute. Toward the end of the season there will be a tournament, according to Jamie Beniac, a sophomore criminal justice major at Roosevelt who works for the intramural league.

Bowman said basketball is always prevalent in Chicago regardless of the season.

“The NBA season is going on, soon March Madness will be coming up,” Bowman said.

According to Phillips, there is no reason not to have a Renegades team this year because the Goodman Center, 501 S. Wabash Ave., is adjacent to Columbia’s campus and Roosevelt collaborates with Columbia to promote athletic programs.

“We have the facility; we worked out a contractual deal with Roosevelt,” Phillips said. “If you have the resources to make it happen, it’s important that we do push basketball.”

According to Aaron Rolle, Roosevelt’s assistant men’s basketball coach, all players must check in with IDs and sign in. Players should wear light colors and are limited to a single team, he said.

Rolle said players from other schools and the team they play on will be disqualified from the league.