Roller derby girls jam back to the top 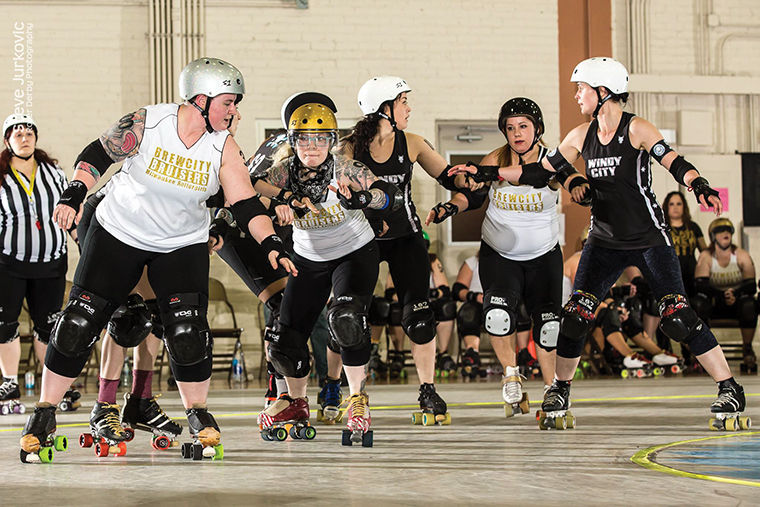 The Windy City All-Stars played against the Milwaukee Bruisers, winning the first game of the season April 2.

The other girls were playing with Barbies and doing dress up, but Kristy Gregory was trying to outrun the boys on the school playground. Sometimes she would take them on in arm wrestling and sometimes won.

Today, she’s still winning and outrunning the competition on the roller derby track.

She is one of the three team captains for the Windy City Rollers, an all-female roller derby league in Chicago. Women in the league skid, skate and stop in padded gear and block and jam opponents to accomplish one goal: win.

This year the league is fighting to regain its once lofty national ranking.

Five years ago, Gregory, an attorney, needed a new challenge—maybe a contact sport that would allow her to tackle the competition. Gregory, along with the rest of the team, is trying to get the Windy City Rollers back in the top 10.

“I like this environment,” Gregory said. “I like the sport. I [was] going to learn how to skate,  and I’m going to do it.”

As one of the 30 women who make up the WCR All-Star team, Gregory is currently practicing for the second game of the season, set for May 14 at Broadway Armory, 5917 N. Broadway, having won their first game April 2 against Milwaukee’s Brewcity Bruisers.

Most commonly associated with the 2009 film “Whip It,” starring Ellen Page and directed by Drew Barrymore, roller derby is a contact sport in which five members of two opposing teams race around a skate track while one member of each team, the jammer, attempts to lap the track to score points.

Known primarily as an underground sport that celebrates women’s empowerment and liberation, roller derby is steadily barreling into the realm of popular sports, and some Chicago leagues are aiming to change the perception of the sport.

Elizabeth “Juanna Rumbel” Gomez and Kelly “Sister Sledgehammer” Simmons founded the Windy City Rollers in 2004. The two women said they were influenced by a grassroots roller derby sport organized by women in Austin, Texas, in the early 2000s.

Since the Chicago league’s formation, the sport’s popularity has slowly grown. According to the Women’s Flat Track Derby Association, WCR’s governing association, there are now more than 100 additional leagues nationwide, making up 283 leagues in total.

The WFTDA reports its rankings nine times yearly, and in 2013, the WCR was ranked eighth out of more than 160 roller derby leagues across the country, but the team fell to rank 61 in 2015. For the 2016 season, the Chicago league currently stands at 62 out of 283.

“Once upon a time, Windy [City Rollers] used to be No. 2,” Gregory said. “Windy has always been the best. I really like pushing limits to the top. It bothers me in a lot of ways that women can’t do this pro, whereas Patrick Kane gets to do pro hockey.”

Despite the sport’s growth, the Chicago league has struggled to maintain its national reputation. The influx of newcomers to the league, who are still honing their roller derby skills, makes rebuilding back the team’s reputation a challenge.

“We had a ton of talent on our team last year, but unfortunately we had problems playing together,” she said. “In a team sport, it is the whole that matters, not the sum of the parts.”

According to Howie Rollson, head coach for the WCR, the league’s new season marks a major turnover since its past of seasoned players—many of whom stuck around from the beginning of the league. WCR has lost many players in recent years because of retirement and the league has fallen severely in the ranks.

“The rebuilding process from last year has been our main priority,” Rollson explained. “I think we have a team capable of doing that. We’re working to get back to the top 40 in the world.”

Ashley “Killa Nois” Perrin graduated from Columbia with a bachelor’s degree in Television in 2010 and has played for the All-Stars team since 2012. She got “hooked” on roller derby when she was studying abroad in Los Angeles during her senior year, where she joined the city’s local team, Angel City.

“WCR is one of the juggernaut leagues in the derby world,” Perrin said.

Because WCR has been noted for high rankings in the past from the WFTDA, Perrin said the league needs to regain its prominent status, especially now that the sport is gaining traction with the revival of roller derby, starting in Austin in 2002.

“This is one of the most rapidly growing sports,” Perrin said. “There are teams in every country you can think of.”

While roller derby is experiencing a renaissance in Chicago, the sport’s popularity is also growing internationally. Although there has been a WFTDA USA team for the sport since 2011, this is the first time that the USA Roller Sports (USARS), a competing organization with the WFTDA has had a Team USA. the Olympics will open the roller derby competition to the world. In 2017, the first ever USA Roller Derby Team will compete in the Federal International of Roller Sports’ 2017 Roller Games, which will be held in Nanjing, China. This recognition of the sport has intensified competition among Chicago’s five roller derby leagues in the roller sports community.

Dakota Prosch, who played with WCR for eight years ending in 2012, went on to create her own league, the Chicago Red Hots, in December 2012 under the USARS rules.

Unlike WCR, Prosch said the Red Hots have a more concentrated league structure, allowing players to focus on their athleticism and derby skills, instead of being a “jack of all trades” like players in WCR’s volunteer-driven community. Members of the WCR, for example, have to develop marketing and volunteer skills, while Prosch said she focuses more on practice.

The Red Hots also follow the official Team USA roller derby rules, which Prosch said she enjoys more, as opposed to WCR’s slow derby rules, where jam blocks last up to two minutes compared to the U.S. team’s 90-second rule and are more aggressively intense. Jam blocks are lines of members blocking the other team for a timed play, and happen multiple times throughout the 60-minute game.

Another challenge roller derby faces is the stereotypes often associated with women who play roller derby. WCR’s teams work and play hard to dispel some of the derby myths, such that men are always better.

Ren “Mack Savage” Lahvic, a 2012 Columbia marketing alumna who plays on the Windy City All-Stars, said many people who do not understand the sport assume it involves women who tussle around and do not engage in “real” physical activity that other sports require.

“The [top] stereotype we come up against is the sexual aspect of it,” Lahvic said. “People think it’s a lot of girls in miniskirts wearing fishnets, which is fine because it gets asses in seats. I used to always say they come for the fishnets, but they stay for the sport.”

Gregory said many men think the sport is women elbowing, fighting and rolling around with each other, when in fact roller derby leagues have rules and standards.

“People think we just punch other people or people will say ‘sharpen your elbows’ [but] you’re not allowed to punch and elbow people,” Gregory said. “A lot of people think swimming is easy until they do a lap, and then they do another lap and they’re like, ‘Oh my god, I’m exhausted.’ A lot of this stuff takes more skill than people realize.”

Roller derby is also a true women’s sport. When women play a male-dominated sport, fans call it “women’s football,” but one of the reasons Lahvic enjoys roller derby is that it needs no antecedent.

“You can say roller derby and people’s minds automatically go to a women’s sport,” Lahvic said. “It’s really cool that women have a sport and they own it. We’re the first thought and not the second thought.”

As the team continues to practice for its upcoming game in May, Gregory, who is in her fifth captainship voted by the team, is optimistic about the team’s future.

“We have to overcome any emotions from [falling in the rankings] last year and just leave it behind,” Rollson said. “We started off really well against Brew[city], and we had been able to overcome that so we have a good environment at practice.”

Anna Little, a senior photography major at Columbia, joined the WCR after yearning to belong to a team.

At first, she said she only intended to go to the clinic WCR offered, but days later, she ended up trying out and became a player on the Rider 1 team, where the majority of beginning skaters are placed before competing.

But Little isn’t in the sport just for the physicality. She appreciates the open environment the team manifests, creating  a warm, family atmosphere.

“I don’t know of a sport in particular that  is so supportive,” Little said. “When we had our first league meetings, we had to say our names and what we wanted to go by.”

Little also said when she first joined, she was surprised to see the diverse community of members it fostered.

“I never realized so many people from the practice [had different] backgrounds,” Little said. “I went into it thinking it was mainly students but the age varies immensely. Everyone from graphic designers, lawyers and teachers.”

Rollson has coached for 10 years, starting in Detroit before moving to Chicago in 2010, where he joined WCR and Team Illinois, another state derby league. An extra in “Whip It,” Rollson has seen it all, and he knows what it takes to get the team back to the top.

“We got good leadership, people who are eager to make their presence known,” Rollson said. “We are trying to build our own identity and recognize where the league has started [and] where it’s from.”