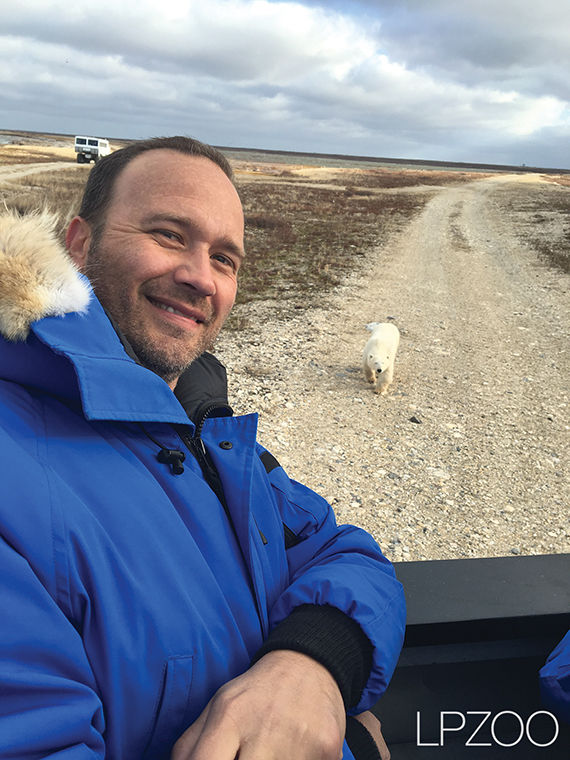 Nielsen poses for a picture with a polar bear on his trip with Polar Bears  International’s Climate Alliance.

Anthony Nielsen has worked as lead keeper of carnivores at Lincoln Park Zoo, 2001 N. Clark St., since 2010, but has worked at the zoo since 2000. Nielsen said his favorite parts of the job include interacting with and training animals, but he is especially passionate about protecting polar bears. Nielsen has a Bachelor of Science in fisheries and wildlife biology from Iowa State University. He took a trip to Canada to represent Lincoln Park Zoo in Polar Bears International’s Climate Alliance in October to observe the bears in their habitat and learn what can be done to protect them. He is also planning an event for the zoo that is meant  to educate residents about how their actions’ impact the environment. The Chronicle spoke with Nielsen about his work, his fondness for polar bears and the reduction of energy consumption.

THE CHRONICLE: What is your favorite part of working at the zoo?

ANTHONY NIELSEN: Spending time with the animals—getting to know them, their behaviors [and] personalities. One thing we do at the zoo is train them for husbandry behaviors to make their lives and our jobs easier when it comes to anything medical. When you train an animal to trust you, and you’re able to get them to do what you want to do without any stress on them or yourself— it just makes everything worthwhile. That’s what I love—spending time with the animals and working with them on a day-to-day basis.

Why are you passionate about protecting polar bears?

I worked with the polar bears at the zoo before they left a year or so ago. [There is] just something about their personalities [and that] they are a species that is threatened. The polar bears seem to act as an indicator for climate change, so by looking at the animals and their habitat, you’re able to form that connection and realize that stuff going on here in Chicago affects the animals up in Canada or up in Alaska. They’re one of the animals I started working with and just fell in love with and enjoyed being around.

What can Chicagoans do to lessen the effects of global warming?

What we’re trying to do with the Climate Alliance is get people to reduce their carbon emissions in their daily lives. When you burn natural gas, oil and coal, you are releasing all this carbon dioxide into the atmosphere. You need carbon dioxide in your atmosphere, but [when] you’re burning carbon dioxide [and] there is too much in your atmosphere,it’s getting thicker and [is] trapping that heat. That heat is unable to escape out of the atmosphere, which causes a disruption in our climate. Some things you can do is use your car less—use public transportation [or] ride your bike, shop locally because those goods are traveling less distance, turn your lights off, lower your thermostat in the winter or not turn on your air conditioning in the summer or try to run it less often. Small things in your daily life can greatly reduce the emissions into our atmosphere.

What are you working on next?

What I’m hoping to do next year—hopefully sometime in July—is have some type of green fair here at the zoo, which will bring different vendors and things [to] show people how they can reduce their emissions on a daily basis and try to get people to [have] more green practices. So that is going to be a lot of my work over the next few months, getting this all together.

What do you like to do in your free time?

I have a wife and two kids, so that takes up a lot of my free time at the moment. If I ever get some time away, I like to go for bike rides. I like to cycle. I also like to spend time outdoors near the lake and enjoy the lakefront [and] enjoy what the city has to offer as