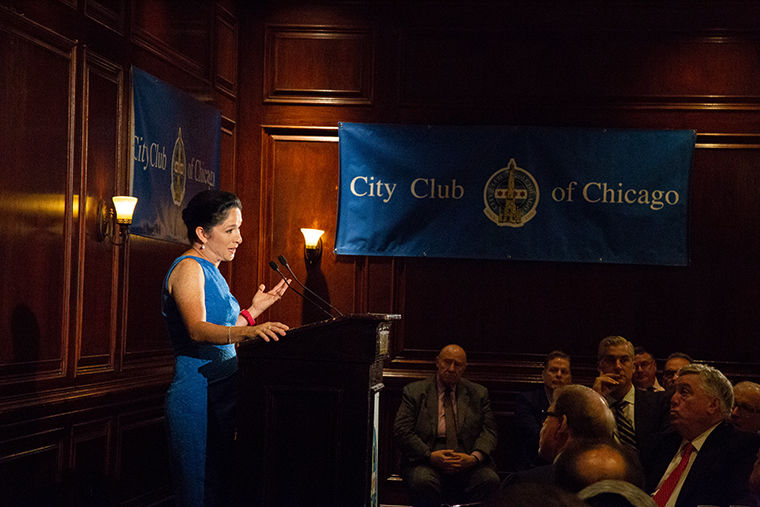 Illinois Comptroller Susana Mendoza is giving a speech about transparency in the budget at Maggiano's Banquets, 111 W. Grand Avenue.

Illinois Comptroller Susana Mendoza, sometimes cited as a potential mayoral candidate, told the City Club of Chicago last week that she is not a candidate.

“Look, I’m fully focused on the next 62 days.” she said at a Sept. 5 City Club luncheon at Maggiano Banquets,111 Grand Ave., as she recounted the ups and downs of her two years in office.

She noted she worked approximately two years without a budget, a dilemma she shared with most Illinois state officials.

Who, if and when state creditors were paid was a continuing headache for the state’s top financial manager.

Jay Doherty, president of the City Club of Chicago, introduced her as “second to none when it comes to managing and understanding the state’s financing.” During her time as comptroller, Mendoza passed four major transparency reform bills, cut the Office of Comptroller’s budget, brought down interest rates on state debt and helped end the budget impasse that affected Illinois for nearly two years, he said.

“When I took office in the depths of the budget impasse, I found myself in a position that a comptroller was never meant to be in, and that’s making life or death decisions about who gets paid now and whose payments have to wait,” she said, “And that’s because the state still doesn’t have enough money to pay all of its bills.”

She also discussed the mountain of debt the state has racked up under Governor Bruce Rauner and where the state now stands in its financial ratings.

“We’re no longer careening down the path of double-downgrades that we suffered through during the worst part of the budget impasse,” Mendoza said. “We’ve come to rest now on the cliff above the molten lava of junk bond status.”

She said her team took a no-nonsense approach to late payments and unnecessary spending, even cutting her own budget by 10 percent.

“Even during the worst fiscal crisis in the history of the state of Illinois, when the comptroller’s office was being asked to do more than ever before, I said ‘We’re going to do more with less,’ and we’ve done exactly that,” Mendoza said.

She also called for transparency within the budget and said one of her biggest accomplishments was the passage of the Debt Transparency Act, which holds state agencies to a higher level of accountability for unpaid bills and allows the public to view debt owed by each agency.

“It’s hard to overstate the importance of what the Debt Transparency Act means for the state’s finances,” Mendoza said. “While it may not seem like a big, sexy thing to talk about, let me tell you, if you’re into saving money for the state of Illinois, this is about the coolest thing that happened in this whole legislative session.”

Freida Curry, managing director at the Women’s Business Development Center and event attendee, said “I [initially] didn’t have a strong opinion about her one way or the other. But listening to her, I felt like she’s somebody that I could trust and get information from.”