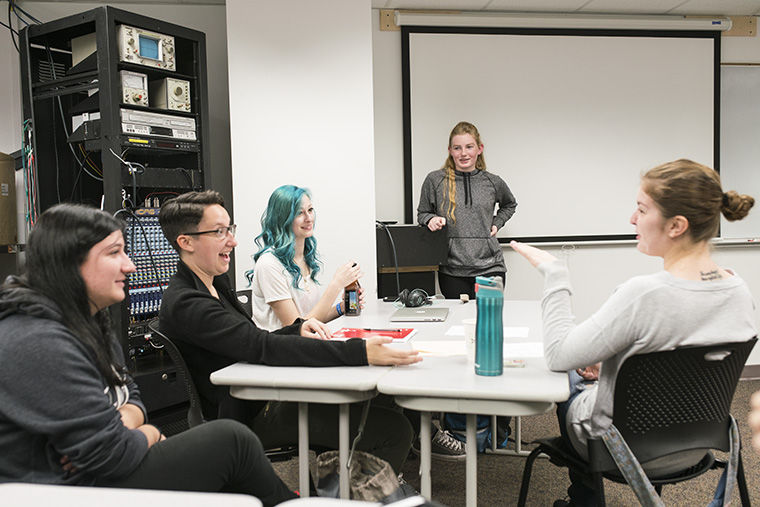 New student organization Women is Audio was co-founded by junior audio arts & acoustic major Kendra Searl. Searl said the club allows women in the field to meet and encourage one another.

Female students in the Audio Arts & Acoustics Department have formed a new student organization, Women in Audio, to give women a place to come together in the male-dominated field, according to club president Kendra Searl.

The organization, which meets Monday evenings, was founded by junior audio arts & acoustics major Searl, who had the idea last spring. Searl said she was prompted to create the organization after realizing the lack of female representation in the department and the field as a whole.

According to enrollment figures published in the Institutional Effectiveness’s website, the Audio Arts & Acoustics Department currently has 64 females out of 422 total, making women 15 percent of the department. This is a 2 percent increase from last year’s 67 out of 501 students—when women accounted for 13 percent.

“It can feel like you don’t belong in a career if there’s no one like you,” Searl said. “I wanted to start [Women in Audio], so I can become friends with other girls in the department to promote women participating in the field and show them, ‘Hey! You can do this!’”

Searl added that women are sometimes overlooked in their classrooms by their male counterparts.

“In a way they kind of underestimate you,” Searl said. “They don’t really understand you because they’re use to having a bunch of other guys working in the audio field.”

To get the organization off its feet, Searl reached out to Sandra Guzman, an adjunct professor in the Audio Arts & Acoustics Department.

Guzman said an organization such as Women in Audio was something she had considered launchingsince she started at Columbia and is excited to see it come to fruition.

“I have taught classes with just one or two women in in the room, and although I tried to reach out [to them], I’m not a peer,” Guzman said. “It’s really great Columbia has such an organization going forward.”

Junior audio arts &amp; acoustics major Jordan DeRop, a member of Women in Audio, said the audio field being male-dominated has only motivated her, and she hopes the organization can provide that motivation for other women.

“We’re trying to make people see that women too are interested, and we’re trying to be on an equal playing field with men,” DeRop said.

Searl said the organization’s first meeting two weeks ago had a turnout of 12 students.

Guzman said she is excited to see have guests speakers addressthe Women in Audio group, so they see positive examples of women working in the field.

“Women here at Columbia can see examples of people who are like them, who are women working in audio and the challenges and successes they’ve achieved,” Guzman said.

Chair of the Audio Arts & Acoustics Department David Worrall said he supports Women in Audio, describing it as a safe place for students with a common base to come together.

“It’s not my initiative, but it’s a good initiative, and I support [the students] in doing it,” Worrall said.

Searl said the organization is discussing plans for hosting fundraisers throughout the semester, so itcan attend tours and concertsin the city, as well as plan a trip to Nashville during Spring break.

Although current members of Women in Audio are audio arts & acoustic students, Searl added that she hopes to open the organization up to any women at Columbia who have interests in audio.

“It’s a great time for this group to form,” Guzman said. “I see a lot of energy and excitement.”