REVIEW: The Orwells, The Walters shake it down at home show on US tour kickoff (PHOTOS) 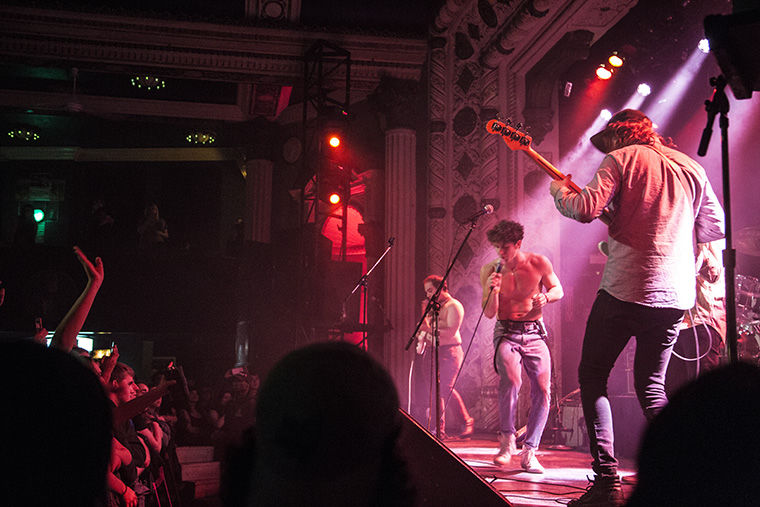 Shirts off for (some of) The Walters!

“Take your shirt off!” the crowd shouted at Walter Kosner of The Walters. Lead singer Luke Olson screamed into the microphone for Kosner to appease the audience; he didn’t need to be told again and quickly threw his black long-sleeved shirt behind him. Olson’s shirt was next to come off, which, if you are a Walters fan, you know is not unusual.

“You see a butt crack, and it really wakes you up,” Luke Olson said with a laugh to the sold-out crowd, who loved every second of the band’s shirtless—and clothed—rock melodies and Olson’s signature amateur dances.

The Chicago rock band was one of three that opened March 16 at The Metro, 3730 N. Clark St., The Orwells, who released its latest album Terrible Human Beings Feb. 17 and just started their U.S. tour.

The night was a typical yet nonetheless vivacious gathering for Chicago’s modern pop-rock scene, bringing local bands together to celebrate their accomplishments and rock out with exploding energy and raw riffs; greet old friends and make new ones and dance like nothing else matters. It is a special community cultivated here that is another affirmation Chicago’s music scene is one with a true heartbeat and vigor.

The set included The Symposium and Joe Bordanero, but the sold-out show really started to heat up when The Walters were onstage as the last opening act. The group played a 20-minute set but unfortunately did not play its newest single, “She’s Gonna Leave You,” a damper on their otherwise solid performance. The band is touring with The Orwells through June, with The Orwells continuing separately through July.

While the Chicago show was just the start the tour, The Orwells’ lead singer Mario Cuomo proved—with his sense of pure entitlement, cheeky smirk, sassy shaking hips and long blonde hair that amp up his stage persona—that home concerts set a high standard to follow. Ignoring his early departure from the stage at the end of the band’s set, his energy was what captured the night, a strong match for Olson to compete against—unless he rides its waves.

Before playing “Double Feature” from the new album as the show was close to ending, Cuomo yelled, “Now you are going to have more fun. You’ll have nothing to scream about in seven minutes,” urging the energy to grow even larger, despite security constantly catching people crowd surfing.

At one point Cuomo even let slip a quick but loud “you’re welcome” and also hugged himself like a koala—a testament to his frontman cockiness who everyone knows him for.