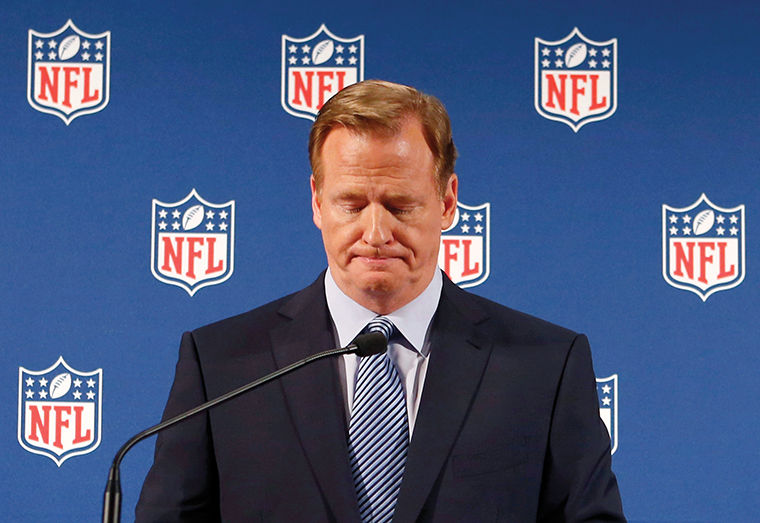 NFL Commissioner Roger Goodell has come under fire recently for the NFL’s handling of domestic violence.

In the past two weeks, three NFL players—Greg Hardy, Jonathan Dwyer and Ray Rice—have been suspended indefinitely by the NFL or their own teams for incidents of domestic violence.

The outcry from organizations that advocate for victims of domestic violence has grown, and Terry O’Neill, President of the National Organization for Women, issued a statement Sept. 9 calling for the resignation of NFL Commissioner Roger Goodell.

“The NFL has lost its way,” O’Neill said in the statement. “It doesn’t have a Ray Rice problem; it has a violence against women problem. The only workable solution is for Roger Goodell to resign and for his successor to appoint an independent investigator with full authority to gather factual data about domestic violence, dating violence, sexual assault and stalking within the NFL community and to recommend real and lasting reforms [to NFL policy].”

It is not just domestic violence organizations that are calling for Goodell’s resignation. On his ESPN2 late night talk show prominent ESPN personality Keith Olbermann called for Goodell and other NFL employees involved in the Rice investigation to step down.

Pat Kremer, an adjunct public relations professor, said the lack of leadership from Goodell could ultimately cost him his job.

“The players are not happy because they’re not seeing leadership,” Kremer said. “One thing everyone in the NFL is looking for—the owners, the [general] managers, the coaches, the players—they are looking for leadership from Roger Goodell, and they haven’t seen that. That’s something that could ultimately demand his resignation.”

With Goodell and the NFL both under fire, the league is searching for answers to rehabilitate its tainted image. Kremer said the NFL’s slow response damaged its ability to recover from the tide of scandals.

Procter & Gamble, a well-known consumer goods manufacturing company, recently backed out of a breast cancer awareness promotion with the NFL, citing the league’s issues with domestic violence as the main reason behind the cancellation.

According to a Sept. 19 ABC News article, PepsiCo and Anheuser-Busch, two of the NFL’s billion-dollar sponsors, have also shown concern regarding the NFL’s handling of domestic abuse.

Anne Marie Mitchell, an associate professor of public relations, said P&G did the right thing but the move is not entirely about ethics.

“We want to be responsible corporate citizens,” Mitchell said. “[Companies] have to act, but it’s also an opportunity for companies to elevate their brand, so it’s part business because their brand gets attention.”

Larry Minsky, an associate professor of advertising, agreed that a brand’s public actions have more to do with sales than ethics.

Minsky also said a brand’s decision to break its partnership with the NFL depends on the company and its comfort level.

“It depends on the brand of the company as well and what they’re comfortable being associated with,” Minsky said. “Obviously, there is a lot of tasteless advertising [during] the Super Bowl.”

Goodell held a press conference Sept. 19 to address the ongoing turmoil. Shortly after, he faced heavy criticism on social media from past and present NFL players for his underwhelming performance. Kremer said Goodell’s mechanical reading and lack of empathy were ultimately his downfall.

Kremer said Goodell’s press conference was not well-received because he was not direct enough.

Many NFL fans have taken to social media outlets such as Twitter and Facebook to voice their dissatisfaction with Goodell’s handling of domestic violence situations.

Some of those fans have suggested that Goodell stay out of the spotlight for the time being and fix things behind the scenes. Kremer said Goodell does not have that option because  as the commissioner, he is the NFL’s leading man.