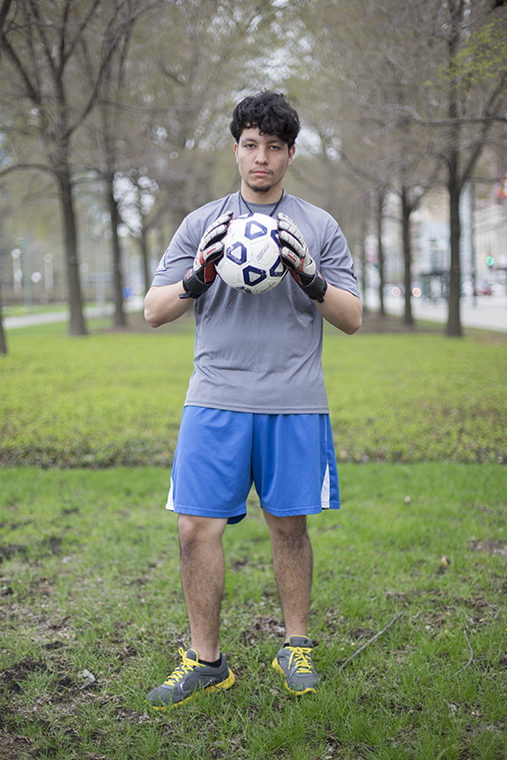 William Montes, captain and goalie of the Renegades co-ed soccer team and junior creative writing major, said his mom, a soccer coach, pushed him to join a soccer league at 3 years old. With a love for the sport and nothing else to do living in Tampa, Fla., Montes stuck with soccer and developed skills that allowed him to play at an advanced level for his club and high school teams.

Montes found a way to incorporate lessons learned from soccer into his other interest: poetry. He said soccer taught him discipline, pushed him to pursue art and further developed his writing skills. With Columbia being one of the only colleges in the country offering an undergraduate degree in poetry, Montes moved from sun-soaked Florida to Chicago to continue pursuing both passions.

Columbia’s soccer team is on hiatus until the fall semester, but Montes said he hopes to create a 4-on-4 indoor soccer league for students at Columbia and Roosevelt University during the summer. Competing teams would meet at the Goodman Center, 501 S. Wabash Ave., every week to play for a few hours, he said.

The Chronicle spoke with Montes about his early soccer career, passion for poetry and thoughts on playing for the Renegades co-ed soccer team.

THE CHRONICLE: Did you play for your high school’s soccer team?

WILLIAM MONTES: [I attended] Thomas Jefferson High School in Tampa. I played keeper for them. We were sort of a lower-tier team. High school [soccer] out there was just for fun. The majority of the competition was at the club level.

CC: Have you participated in any big soccer tournaments?

WM: Back in Florida, for my club team, we played in the big tournament for state [soccer]. [The team] didn’t get very far, but that’s probably the biggest tournament I’ve been a part of.

CC: Why is the Renegades soccer team co-ed?

WM: It’s just easier than getting into an adult league. If it’s co-ed, a lot of people just play for fun. It’s hard to get practice in to play at that higher, more competitive level. I would love to [play in a men’s league], but it’s just hard to get the people involved, recruiting people to play soccer. Co-ed is usually the easiest option.

CC: Is there a difference in the co-ed team’s level of competition?

WM: There’s different levels of co-ed, but usually there’s an adult league where the competition is harder, but at the same time it’s just not as competitive as it would be in an 11-on-11 adult men’s or women’s league. It’s just for the love of the game.

CC: What would you say to someone who is hesitant to join the Renegades?

WM: The Renegades are here to stay. Just jump right in. We won’t bite. We welcome anybody with open arms. It’s not a jock-centered culture. It’s just another community for people who love to be active and play sports.

CC: How has your love for soccer influenced your poetry?

WM: I’m an artist first and foremost, but being an athlete is what got me to where I am today. It gave me the discipline to want to be better, not just to be the best, but to be better as an individual. As a keeper, I have to direct and give people different points of view and vantage points on the field and poetry is very similar in a way. You’re writing about the world as you personally see it so other people can relate.