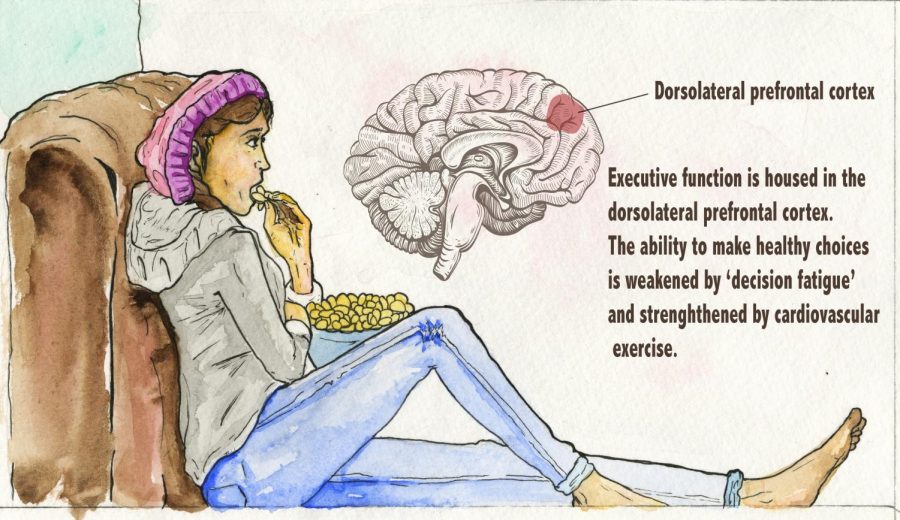 Self-control is an important element of dieting, but dietary habits may play a role in self-control.

Cravings for high-calorie foods and the strength to resist them has been linked to the part of the brain known to control will-power and restraint. Regular exercise strengthens the set of cognitive processes involved with reasoning and problem solving known as executive function.

In a study published in the September issue of Psychosomatic Medicine, researchers at the University of Waterloo in Ontario used magnetic stimulation to decrease activity in the dorsolateral prefrontal cortex (DLPFC)—the part of the brain known to be the seat of  executive function—on 21 female participants between the ages of 19 and 26.

By continuously stimulating the DLPFC, the strength of participants’ executive function was reduced. To provoke cravings, the women were shown 3D images of Pringles and milk chocolate  followed by lower-calorie saltine crackers and dark chocolate.

When given a choice of consuming the lower- versus higher-calorie snacks, test subjects craved the latter more, leading researchers to conclude that executive function decline correlates with poorer dietary decision-making.

“Several factors make this study novel,” said Chinara Tate, a registered dietitian and doctoral candidate at Columbia University who is not associated with the new research. “This study is the first to examine executive function as a potential mediator between the activity in the DLPFC and appetitive food consumption.”

According to Peter Hall, the study’s senior author, cardio exercise is the most effective way to strengthen executive function.

“There are a few things that we can do to optimize our executive functions and maximize the health of the supporting brain regions,” Hall said in an emailed statement. “The biggest one is aerobic exercise. Second is to make sure that we get lots of rest and avoid sleep deprivation. The final is to avoid substance abuse, particularly alcohol.”

The study suggests that executive function strength could play a major role in a person’s risk for obesity. Individuals with weak executive function may be less likely to regulate snack food consumption, especially with wide availability of high-calorie snack foods, which increases the likelihood of those individuals becoming overweight.

Although the research did not specifically study the correlation between executive function and obesity, Hall said the results do shed light on the relationship between brain function and dietary choices.

“The findings suggest that a relatively under-appreciated facet of obesity prevention might be preservation of brain health—specifically the parts of the brain that allow us to engage in self-control,” Hall said.

According to Marissa Burgermaster, a researcher at Columbia University’s Tisch Center for Food, Education & Policy, the results of this study could be applied in obesity prevention programs.

“Interventions might be put in place to increase physical activity, since it has been shown to increase executive function,” Burgermaster said. “Based specifically on the results, it’s key to think about how we can make physical activity routines part of the culture of workplaces and universities as well.”

According to Burgermaster, college-age adolescents may be more vulnerable to instant gratification with their food choices and are less oriented toward long-term thinking..

A 2005 study conducted from the University of British Columbia found that when the brain is overwhelmed with decisions, executive function weakens, decreasing the amount of mental energy dedicated to decision-making, a state known as decision fatigue.

The process of making dietary choices may drain the individual’s resources, hindering the executive function’s ability to carry out its other activities, according to the study.

Brielle Munizzi, a senior advertising major, said she craves unhealthy food when she is stressed.

“When stressed, I go into work mode and don’t even think about food, so at the end of the day I realize I haven’t eaten and eat anything available,” Munizzi said.

Hall said college students have a unique relationship with willpower and that they have healthy brains compared to older populations.