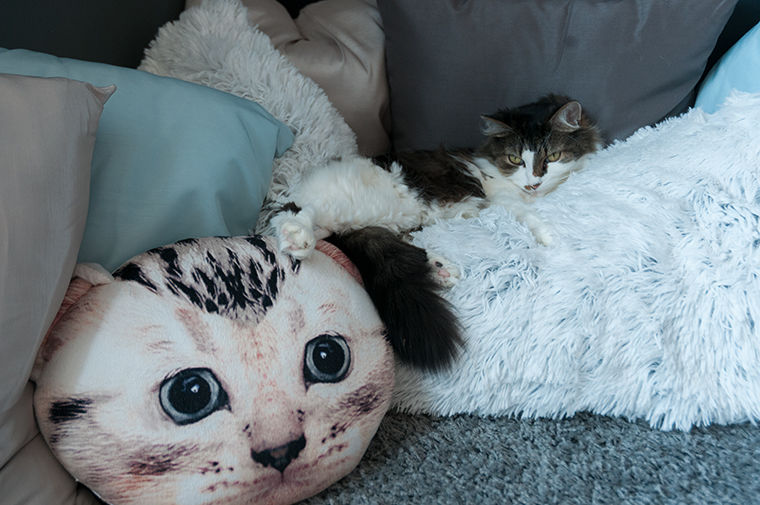 Cats lounging in a pile of pillows. Cats grooming themselves in front of a large storefront window. Cats curled up at the top of a cat tree, sprawled on a tabletop arcade game, sleeping in a restored “Galaga” game cabinet.

That is business as usual at The Catcade, 1235 W. Belmont Ave., an arcade-themed cat cafe that embodies Shelly Casey and Chris Gutierrez’s shared love for cats as well as Gutierrez’s knack for amateur arcade game restoration.

A nonprofit charity that launched Aug. 19, The Catcade allows patrons to donate $15 to spend an hour with the cats. It also facilitates adoptions, deducting the cafe’s admission price from the $100 adoption fee should a visitor choose to take home a cat.

Casey and Guiterrez decided to make the cafe a reality in January after thinking about it for two years.

Thanks to donations from an Indiegogo campaign this spring, the pair created The Catcade from scratch over the past eight months. Casey tackled logistics like paperwork while Gutierrez made arcade cabinets and furniture.

“I kind of came up in the punk rock community, where the DIY ethic was the foundation of it all,” Gutierrez said. “This is our adult punk-rock business venture.”

Casey and Gutierrez did not do it alone, though; Felines & Canines, an animal shelter in Ravenswood, is an ongoing resource for The Catcade.

“We just said, ‘We are still new in this community; we want to make sure we’re doing things right. Can we work with you guys to facilitate more lives being saved?’” Casey said. “And they were like, ‘Absolutely.’”

Abby Smith, executive director of Felines & Canines, said she was encouraged by the research Casey and Gutierrez were doing.

“There are places that open up every day that don’t have a support system, and they wind up getting overwhelmed and in trouble,” Smith said. “We wanted to make sure it didn’t happen with them.”

Smith added that The Catcade is a win-win, letting the cats socialize and acting as a bit of therapy for animal lovers.

While there were only two adoptions in The Catcade’s first week, the public response has still been enthusiastic. Brynn Ramos, who lives in Lakeview, started crying when a cat jumped onto her lap during a visit to the cafe Aug. 25.

Reactions like Ramos’ are affirming for Casey and Gutierrez. Gutierrez said this what they find so fulfilling about the experience: watching fellow cat lovers share in their joy.

“This is our future,” Casey said. “It would be really cool if, in five years, we could be bigger, or save more lives, or turn this into something even cooler. Like [Chris] said, this is what we have been training for.”