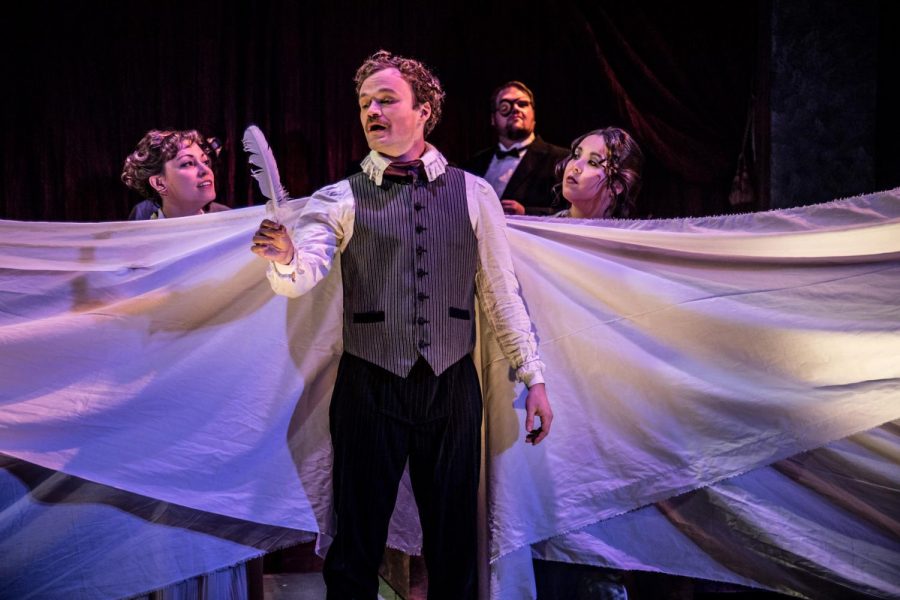 A musical about the life of Edgar Allan Poe has a lot to live up to: It must balance Poe’s macabre, dramatic writing style with factual detail, while being careful not to lose one in favor of the other.

“Nevermore,” which will run until Jan. 28, follows Poe, played by Kevin Webb, from childhood to death. Six cast members rotate as the key players in Poe’s life, each portraying several, and also act as narrators, with props and subtle costume changes cluing the audience in as they jump from character to character.

Webb’s Poe is emotional, fragile and passive, with surprisingly little to do for a titular character who is almost always onstage. But the point of “Nevermore” is that Poe is a victim of circumstance. Death thwarts the hope that Poe clings to, even as he loses loved one after loved one, from his manic-depressive mother to his cousin-turned-child-bride.

From the opening song onward, Poe’s movements are controlled by the twitch of one of the ensemble’s hands, like a marionette on a string. This reminds the audience that Poe was never in control, and the dark themes in his writing were thrust upon him.

Under the direction of Ed Rutherford, “Nevermore” is both bleak and darkly funny. It is almost vaudevillian, with Tim Burton-like notes of ghoulishness. The set is mostly bare, with a bed, a few chairs and gauzy curtains draped from the wings; however, the stage never feels empty between the ensemble cast and the appropriately dramatic lighting design focusing the audience’s attention.

A musical standout is the “Raven” song. Essentially an abridged version of Poe’s famous poem set to music, it is a showstopper although one of disappointingly few opportunities for Webb’s vocal range to shine. Another highlight is ensemble member Matt McNabb, whose roles include both Poe’s biological father and his foster father. McNabb is at times gleeful and at others threatening, but he never fails to command the stage.

While Derek Van Barham’s choreography is occasionally over-the-top and campy, and the show’s convoluted end could have benefited from tighter direction, “Nevermore” is consistent in its message and remains focused.

Poe slowly takes the circumstances he is forced to confront into his own hands by embracing his morbid inclinations. He transitions from a white quill to a black one, and the hope that paints Webb’s face in the beginning of the show, slowly fades throughout the second act. By the final song, it is Poe who is standing above the ensemble, controlling their movements with a twitch of his wrist.