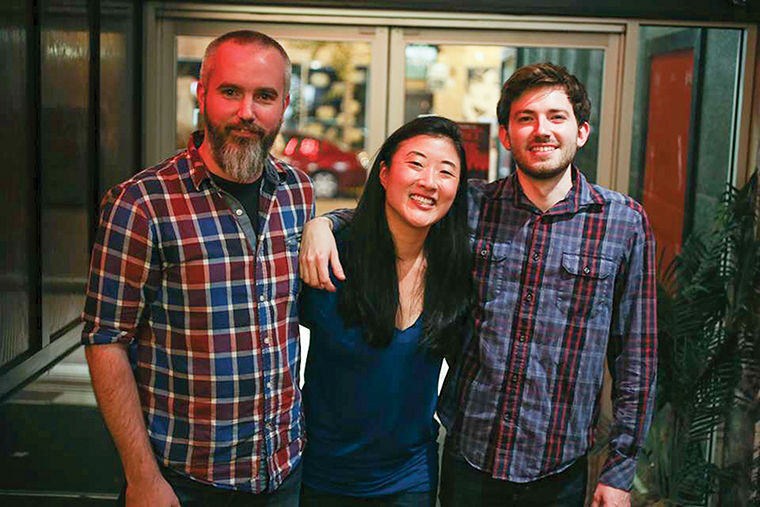 Director Philip Swift, and filmmakers Emily Strong and Brent Bandemer all were surprised at the amount of support they received in Chicago for their documentaries.

Filmmaker Philip B. Swift’s latest documentary, “The Dark Side of Disney,” examines the subculture and sometimes scandalous goings-on at the family-oriented resort in Orlando, Florida.

The documentary takes its title from an exposé written by Leonard Kinsey about the “steamy, raunchy and often hilarious underbelly of Walt Disney World.”

Swift is no stranger to the creepy side of Disney, as his first documentary, “The Bubble,” is about Celebration, Florida—a city built on land owned by Disney World—and some of the activity that happens in the community.

“For 10 years, they had no crime at all, and then a man was bludgeoned with an ax in his own apartment,” Swift said. “In the ensuing investigations about the murder, it came out that there was a huge swinger scene there.”

Swift sent “The Bubble” to Kinsey, who, after enjoying the film immensely, started talking with Swift about possibly adapting “The Dark Side of Disney” into a documentary, Swift said.

For his adaptation, however, Swift decided to focus on the reasons some of the scandalous activity—taking drugs, sneaking behind the scenes and sexual activity—occurred, a slight deviation from the book’s focus.

“The book tells how and where to do these things,” Swift said. “I thought it would be more interesting to make a documentary about why people feel compelled to do these adult things in a place that is built ostensibly for children.”

According to Swift, he began to talk with his own Disney-obsessed family. The documentary itself tells of his mother’s illegal quest to scatter his Disney-loving grandmother’s ashes by Cinderella’s castle, an activity that is surprisingly common, Swift said.

The documentary also chronicles the stories of other Disney fanatics, including Hoot Gibson, who while working as a custodian at Disney World would sneak off rides and explore their scenes and animatronics, and the subculture of “Disney Gangs,” which are groups of adults who explore the park dressed in outlandish garb—from biker outfits to brightly colored hair and lipstick akin to a pin-up doll.

What struck Swift as the most peculiar thing about these people, he said, was the common thread between their activities. Each one, however extreme or tame their obsessions, used Disney as either a coping mechanism or a source of sad nostalgia.

Director Brent Bandemer said he first heard about Spagnoli from a roommate, and upon becoming Facebook friends with him, found that his timeline was filled with two things—posts about Vietnam and photos of Spagnoli dressed up like a Disney character or at the Disney parks.

“Right away I started seeing the Disney stuff he was posting,” Bandemer said. “I wondered if there was any connection between the two—so I got the idea to extend [a previous film about Spagnoli].”

Producer Emily Strong added that Chicago residents were overjoyed to be able to meet Spagnoli at the event, which sold out.